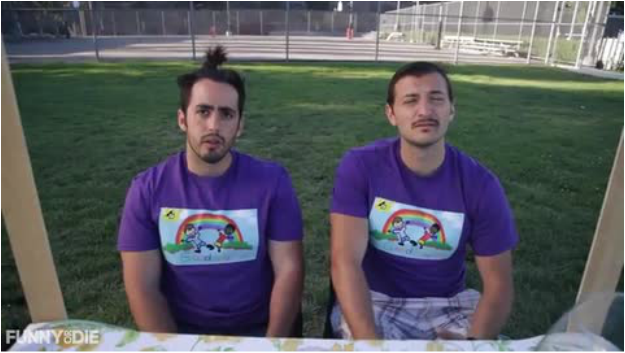 "Happy Guys" - web series
During the second episode of the popular web series, Happy Guys, Mark (played by Arthur Oganesyan) must take birth control pills to appease his girlfriend. During filming of the episode, Arthur had to be an emotional wreck, crying, and acting hormonal.

Much to Arthur’s embarrassment, his mother stopped by while they were filming a very emotional scene. “It was the last thing I wanted my mom to see me doing," he confessed, “She did that ‘okay’ thing and then I hung my head the rest of the day.”
Woodbury University alum, Arthur Oganesyan, graduated in 2015 with a Bachelor’s Degree in Filmmaking. His love for It’s Always Sunny in Philadelphia inspired him to create something similar. In fact, the show reflects his sense of humor perfectly. Arthur wears multiple hats on the series. He is the writer, producer, actor, director, editor. Happy Guys is a two man series starring Arthur and his school friend, Jivan Najarian. The two thought of the idea six months ago and quickly wrote the scripts, one after another.  According to Arthur, “We met for a beer, had an idea, six months later we’re working on the second season.”

“You’re the only one who can keep yourself on track and it’s easy to say, 'You know what? I’ll take today and tomorrow off. I’ll get back to it later.'"

There is discussion about filming the episode in the future. According to Arthur, Happy Guys is written and structured for something viewers would see on Comedy Central or MTV, versus popular YouTube videos on gaming tutorials. His advice to aspiring actors?

“If you feel like you are taking things a little too far, you’re probably not taking it far enough."

With the fan base quickly growing, Arthur shares some spoiler alerts for season two: “The first time around was a feeler to see which way we want to go. In the second episode, the plumber is terminally ill and dies....It’s a really emotionally-driven episode, completely different from what we’ve done. There are uncomfortable situations and twists at the end. I feel like it's going to be an episode out of General Hospital or something. I’m hoping the audience will understand what we are doing because it is completely off the wall from what we’ve done.”

"There were a lot of times we toned it down and people said it was not enough. Don’t second guess yourself. Sure, you’re going to upset some people but you can’t always worry about hurting someone’s feelings because that’s just ridiculous."