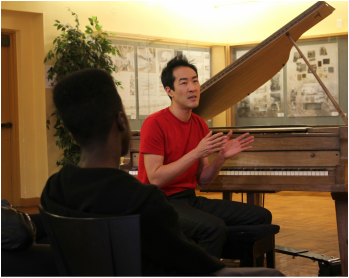 In 4th grade, at Kingsbury Elementary in Redlands, my school was fortunate enough to have a music program where I was introduced to the violin. My world generally didn’t go beyond my bus ride to and from school and the Redlands Oasis Apartment Complex. So, I was lucky to receive one of very few loaner instruments available. My teacher handed me a violin case that, according to one kid, looked like it had been in a fire. The kids at my school were supremely materialistic and carrying a violin case around carries it’s own stigma. I was fully aware my weathered case socially equated to the same thing that loaner PE clothes do to 4th graders. It’s just that I didn’t care. I had access to something bigger than my worries, my struggles, and my limited environment. I didn’t stick with the violin, however I gained an appreciation for music and classical instruments that follows and shadows my life heavily today.
Does the Mario Music still resonate with young people?
​“I introduce it as classical music when I perform at schools, because that music was written in 1984, which to these kids makes it classical music, considering that they were born in like, 2010. Mario is one of those universal things like Star Wars. People from ages 70 to 7, they all get it. When I do the whole spiel, half of the people in the audience can close their eyes and sort of play through that first level in their head from memory. You know where that one-up mushroom is in the middle.  I’ve always appreciated it as a piece of music, and a universal thing that sort of connects everybody.”

How does being a Korean male influence you musically?
“I think every concert I go to, they expect me to be like, ‘Good ebeneeng lehdees and gentomin. Very nice to be heuh in Americuuh. USA numba won!’ There is the expectation that I’m gonna be like that. There is the trope of the Asian American musician, which is not the coolest demographic I think of off hand. 20 years ago, being an Asian American meant you were…Bruce Lee, or a Doctor. Those were pretty much the two options that were open to you in terms of personality set if you were a Korean American male. Of course these days, Koreans are everywhere. They’re in athletics, and movies. On the plane, I saw the new Terminator Genesis movie, and there’s a Korean guy as the T-1000. That’s a real demographic shift that’s been fascinating to see. When I do go out on the road, yes, I do run into those sets of expectations. I do surprise people a lot, but it’s not quite so shocking as it might have been 15-20 years ago.”

"Art can give you: self confidence, teamwork, determination...that allows you to avoid the decisions that can really derail your life."

"We’re going to focus on giving all the 5th graders music education, teaching them things like music literacy, vocal training, and hopefully instrumental training as well. We’ll be reaching 600 children this way.  I fall into the role of arts educator, but I initially reached out to those audiences, to expand my own audience. It was kinda self-serving. I was like, ‘Who am I gonna play for in 20 years, if I don’t make my own audience?’ And that has turned into the current state of things, where people actually regard me as an educator somehow. I don’t have any training in teaching, but I think that role as a teacher is not necessarily to make them a bunch of musicians, but to give them the things that art can give you: self confidence, teamwork, determination, that allows you to avoid the decisions that can really derail your life. When you have a lack of self-confidence, or you can’t focus, you can’t concentrate. We’ll see, it’s a huge experiment. With the right people around me, it’s gonna be great.”

Can you tell me what music and the arts mean to Riverside? Tell me more about having a civic duty to your community.
“The idea of civic responsibility to your community has kind of fallen to the wayside. People talk about patriotism like a flag-pin, or taking a moment of silence at the right time. I think that’s kind of cheap, because you can do that without investing any of your time and effort. And what I mean by community building, is first of all for people who have the resources to give back to their community. Yes, there is of course volunteering your time, but really, these programs are built on money, and giving money to the arts has gotten a bad rap. It has become sort of a joke. People in Congress think the NEAA is a drain on our national resources. However, the arts employ millions of people. Yes, a lot of the work is done by non-profit corporations, but between you and me, the only difference between a for profit and a non-profit is the way they’re taxed. They still need to pay employees and they still need to produce products.  I’m a young parent now. And it’s easy to get focused on your kids and that’s it. I read an Onion article recently that said something like, 'Mom hunting for preschool that will focus exclusively on her son.'  But the idea should be you want the whole preschool better for all the kids, and the community at large, that better schools make better young people, which grow into better adults, and in turn become employed in the community.”

"The arts, at least, expand your mind to help you get past the barriers that people try and sell you."

Tell me about your experience with music and the Valley.
​“I’ve always associated the San Fernando Valley with musicianship. That’s where my piano teacher lived, and still lives. His name is Mark Richman. I think he’s one of the best developmental teachers in Southern California, a true artist. He’s one of the few pianists that still kicks the crap out of the piano. You know, there’s those teachers that can teach you, but they can’t do? Man, he can do. So for me, the valley is where I went to get music, even though I lived in Santa Monica. I loved that he could demonstrate everything he was teaching. So, that’s why I hold him in such high esteem.”​​​
"I want a more informed electorate. Because our democracy and country only work if people know what the facts are, and vote based on the facts. So it’s a two step process, people have to know what the facts are, and to investigate them you have to understand the concept of truth."

"Art challenges you to look past the boundaries of your school, the borders of your town, your state, and even your country.”

To see Alpin perform, check out his current touring schedule at www.alpinhong.com.