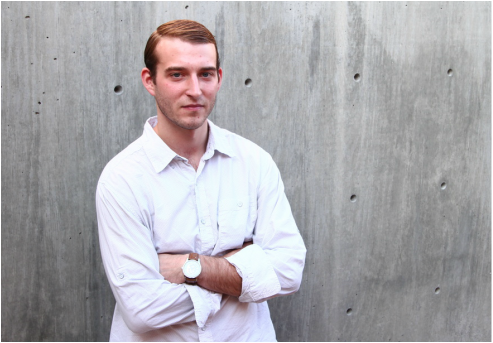 Could you design a building in only four days?
​Erik Eaken did. He designed a building to house bikes in downtown Los Angeles called Threading the Diamond. He is a 23 year-old senior from Woodbury's architecture program who recently won The 2016 Julius Schulman Emerging Talent award along with his team: Nicholas Rados and Breeanna Garcia.  As some of you may know, Woodbury University is known for their intensive and hands-on architecture program. This was the second year in a row that Woodbury placed first in an architect design competition thanks to Eric and his team members, Nicholas Rados and Breeanna Garcia. They competed against five different high ranking universities such as: USC, UCLA, Cal Poly Pomona, OTIS, and Sci-Arc.

​What inspired you to get into architecture?
"Nobody in my family studied architecture, however, I was always good in art. Boston is a hub for architecture and after researching about different programs, it was an intuitive decision to just go for it. I used to have an architecture school close to where I lived, and I became extremely inspired by other people's displayed work. It didn’t feel like a normal major, it was very specific and seemed to be more engaging than other schools.”
What is your biggest accomplishment at Woodbury?
"This competition is my biggest accomplishment at Woodbury. I think it is because our team and how well we worked together. It was the first time that I worked with two people and automatically clicked to get this project done in four days. Usually projects like these take a full semester. To see a full semester of work translate into a four day project where three students had full control over the project made everything really successful."

What do you want people to remember you by?
"I want people to remember the level of excitement I have with architecture, but also the level of curiosity and frustration I had with it as well. In a 6 year architecture school program, you go through a lot and every year and every semester is a little different. We are generalists, so I feel like we need to be knowledgeable is a little of everything. For the longest time, I was always questioning the purpose of these classes- what are they for, and what kind of job will it translate into. I can say after 6 years, these questions have been demystified because I understand where education fits in the picture. And I think that is important to be aware of."

What are your future goals in architecture?
"I have two avenues: one is to get out into the workforce immediately and get my foot in the door to larger offices and the other is working with a team of students and alumni start to freelance projects to get our names out there aside from those major ranking names. I want to offer something to someone that I am good at."

"If you are not producing models, then it has been said that one is not thinking at all." 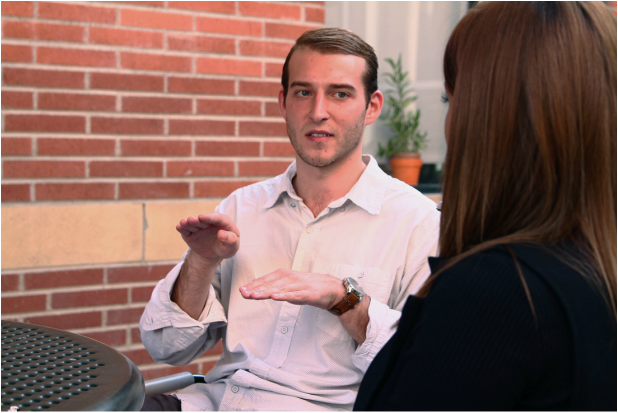 What is the toughest part about designing a building?
"The toughest part for almost any architecture student is the process of thinking, and the process of making. If you aren't producing models, then it has been said that one is not thinking at all. Students become frozen when it comes down to designing, and it’s really important to find a state of mind where you are pushing the idea; moreover, you are also allowing yourself to make something. One should suspend disbelief for a second that the project doesn't have to be perfect, and instead put something out there for others to physically see."

What concept did you think of when designing the building?
"I motivated my team to think at an urban scale. We wanted to re-establish a center for DTLA. Something that would offer amenities to not only to the public, but also to the mass amount of government officials who are right across the street at City Hall. The two towers with a base at the bottom was completely ambiguous, it wasn't really thought out. But the way we moved people through the site trying to connect Grand Park to The Pueblo was really important. And finally offering social amenities with our bike hub idea. We had to include the historic Triforium sculpture in Los Angeles. We needed to find a way to include that in our design, repurpose it, as well as bring something innovative to the design. The commercial bike hub helped them see the progress we were imagining in our project."

"One should suspend disbelief for a second that the project doesn't have to be perfect, and instead put something out there for others to physically see." 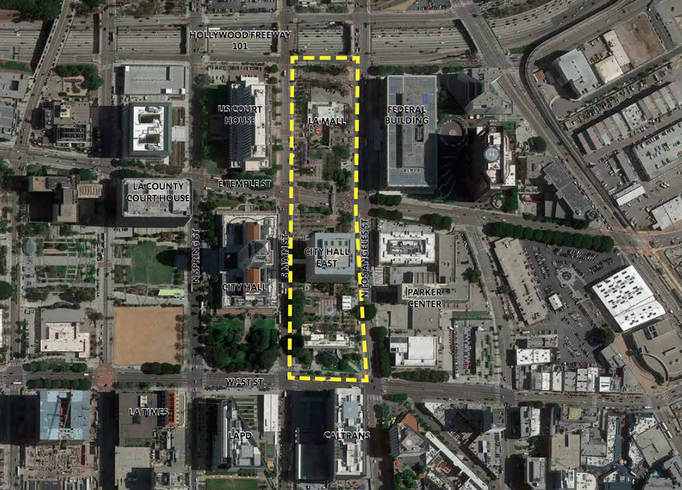 "Our goal was to bring that plan back to life and recreate it in a new and innovating way."

Why did you choose DTLA as your project site?
"This site was assigned to us by the committee. Every year they pick a different site. This was the first year they picked this area to create a completely new building. This site is important in Los Angeles because it’s situated in almost the center of Downtown and it was originally planned to be the 'The 10 Minute Diamond' - meaning, a point in Downtown Los Angeles could be accessible from any point within ten minutes. So, this is representing the center of that 10 minute diamond. Our goal was to bring that plan back to life and recreate it in a new and innovating way."

Where there any goals that weren’t met?
​"Frankly, I think our team did better than any of us expected. I flew back to Los Angeles, and I got to meet my other team-mates, Nicholas Rados and Breeanna Garcia. We showed each other our previous work and our resumes. We then made a schedule and tried to keep to that schedule as much as we could because my role was as a leader was to make sure the ball was moving. My advice to other design students is to suspend disbelief for a moment and just write something down. To do that between three different people is tricky since we all have different ideas. Our dynamic for us to move forward on the same page, and then critically question each other, and then move forward again was really impressive."

"My advice to other design students is to suspend disbelief for a moment and just write something down."