Written by Inés Mendoza-Pérez
​Photos by Reema Aldahlawi, Inés Mendoza-Pérez, and Anatolii Turaev
It was a chilly night at Burbank Bar & Grille, the atmosphere as relaxed as a restaurant on a weeknight tended to be. Soft chattering drifted over from nearby tables, while the more vocal visitors groaned and clapped at the bar beside me, eyes glued to the Dodgers game broadcasting on the screens. The score was comfortably in their favor, but that didn’t put the viewers’ minds at ease; one big hit was all that was needed to change the tide, ruining “Thirsty Thursdays” for Angelenos everywhere, and making Marlins fans very unexpectedly happy.
​
My Thursday was considerably less thirsty, but it wasn’t shaping up to be much better than a potential sports game loss. I turned from the screen, sipping at my very alcoholic peach moonshine as I considered the view directly in front of me. Not even twenty feet away was a small stage, a drumset tucked in the back corner and two tall mic stands pulled to the front, solitary and parallel like a pair of evil twins. I averted my gaze.
I could have been at home. I had two brand new video games waiting for me, a quiet house, and a long, free weekend. I had the resources to make many drinks, practically for free, possibly more alcoholic, in the comfort of my dark and peaceful room. Instead, I was in a public place, with Actual People, waiting for my turn to give karaoke the good old college try.

​"Any residual good vibes from that day had completely flushed from my system as I sat in a moody bar, waiting for my turn to stand up in front of judging strangers and explain to them, through song, how terrified I was of being there.” 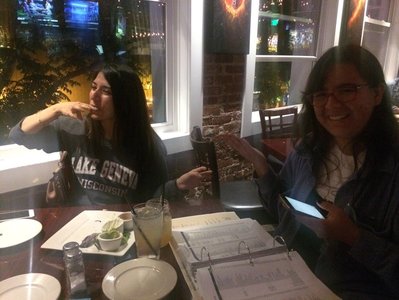 Reema enjoying herself while I question my decisions
​Just a couple days ago I had gone to the Butterfly Pavilion at the Museum of Natural History in Downtown Los Angeles, to challenge my classmate Reema to face her fear of butterflies. An overall positive experience, we left feeling considerably calm thanks to the ambience and fragrance of the garden, and she seemed happy with how calm she was for the half hour we were in the butterfly-filled tent. Any residual good vibes from that day had completely flushed from my system as I sat in a moody bar, waiting for my turn to stand up in front of judging strangers and explain to them, through song, how terrified I was of being there. ​​​​On stage, sitting behind a soundboard and a Macbook, the host Eric tested a mic, crooning along to a song playing on the radio. He was large and imposing, but his kind face and soulful voice had me feeling some sort of comfort deep beneath my surface terror.
On a table beside him were four huge tomes, binders labeled “Karaoke List” with colorful clipart and filled with inches worth of song lists that were very popular in 2007. Next to those, a small container with slips of paper to write your name and song and give to the host. Reema, my partner in fear-crushing, distracted me with a beaming smile. “Are you up next?” She asked, clearly the single excited party here. 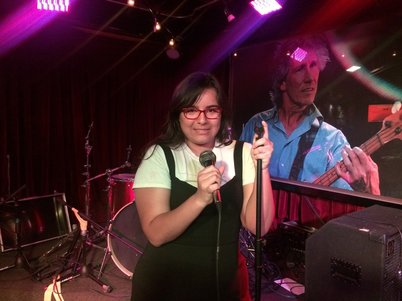 The face of fear
I let out a strained laugh. “Probably not.” Karaoke began at 9pm, nearly an hour ago, and there was still a steady stream of bold singers going onstage to show their vocal prowess. Granted, it was really only four people who were going up regularly, but they clearly owned the stage, especially the modestly dressed pair belting 80’s lady jams and a young man singing moody rock songs to his girlfriend, who watched him perform through her Instagram camera. Reema, ever enthusiastic, cheered them all on, singing along to every song she didn't know. I tried keeping some semblance of good spirit, but each passing song made the sticky ball of regret in my stomach grow and grow.

I don't hate singing at all; I sing along to Ella Fitzgerald in the shower, and reenact the entirety of the In The Heights musical when I'm vacuuming my empty house. I like music. But the key thing to notice here is that I do this all alone, with zero audience participation.

My family lives off of audience participation. If you ask one of my aunts or uncles about their hobbies in school, they'll either say mariachi, folklorico dancing, marching band, or, in most cases, all three. Some of them actually work in mariachis, so they actually, literally live off of audience participation. This stuff practically runs in my family. And yet, whenever they try to get me to sing boleros or rancheras at get-togethers, I freeze up. My whole general chest area seems to shrink three sizes, like The Grinch Who Hated Public Performance. The one time I got up to sing, for my grandfather's birthday, I hated every second of it; to this day, Cielo Rojo makes me squirm whenever it plays on the radio.

​As Eric ended a soulful performance of “Come Together”, I looked back at the game. I wanted nothing more than to sit precariously perched between two large men and watch those baseball guys swing and swing and swing and walk and repeat.

I don’t care much for sports. I took another large gulp of my drink.

Finally, my name blipped onto the screen with no warning, and I felt my throat close up. A panicked conversation brewed in my mind. Am I really doing this? You are, you have to. With everyone watching? Honestly, there’s just a handful of people watching, and that handful includes the other performers. Is there any way for me to bail now? Too late, you’re already on stage.

And I was, standing beneath the bright pink and yellow spotlights, right in front of the silently menacing twin mic stands. Come and play with us, they seemed to say, in unison. I grabbed one to break the haunted symmetry. 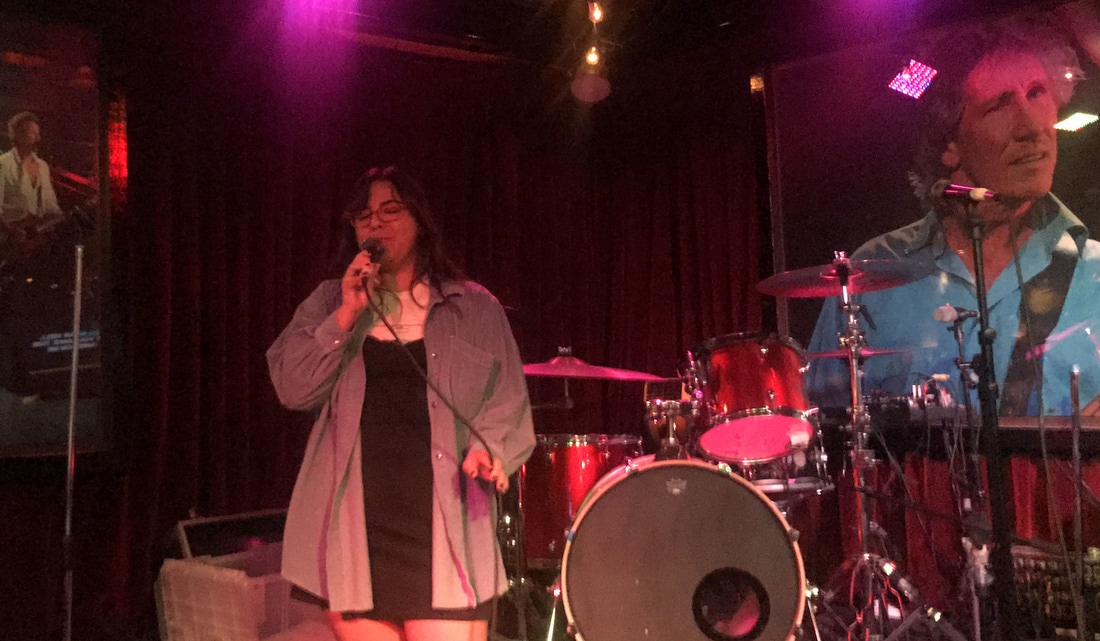 Killin' it at my first karaoke

"No one worried that a Beyoncé or Freddie Mercury would go up, absolutely crush it, and turn the crowd against their own mediocre performance with a slow, disapproving shake of their beautiful head."

I proceeded to give the shakiest rendition of Sara Bareilles’ “Love Song” ever heard, hands clutching the microphone a few inches from my mouth. I got this. You got this. It's all good. Feeble phrases of encouragement cycled in my mind, keeping me grounded as I sang. I can barely even hear myself. That's good! It's good.

Then Eric leaned over, put a light hand on the microphone, and gently moved it closer. My voice boomed out over the speakers. Whatever thoughts were in my mind imploded, and were replaced by TV static. A couple of people whooped encouragingly, but I kept my eyes trained on the lyrics on screen, struggling to keep my quivering voice in tune as I tried, somewhat unsuccessfully, to stop noticing the heads turning towards me. 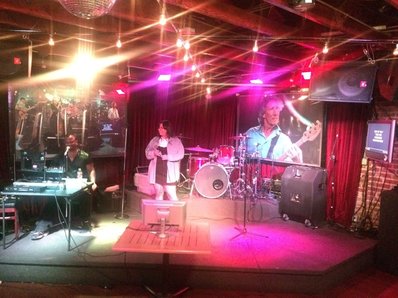 And suddenly it was over, the last few notes fading off as my performance was applauded by more people than I would have ever wanted to listen to me. No one booed me, and if anyone was displeased by my singing, I sure didn’t notice through my anxiety.

I walked back to our table, Reema gushing and congratulating me on my performance, and processed the experience. As afraid that I am of speaking and acting in front of crowds, karaoke was a very harmless thing to do. If anything, I felt proud of myself, for going up in front of a bunch of people to do something that I genuinely enjoyed. Everyone who went up just wanted to have fun; they weren’t worried that a Beyoncé or Freddie Mercury would go up, absolutely crush it, and turn the crowd against their own mediocre performance with a slow, disapproving shake of their beautiful head. It’s singing 80’s rock in a bar full of passive baseball fans, not playing at the Hollywood Bowl. A few songs later, I went back up, this time with a slightly more confident version of Stevie Wonder’s “Uptight”. Because I really was ‘alright’, singing to and along with other casual music lovers on a cool summer evening.