​Written by Cindy Long & Julian Danan
​Photographed by Brody Angeles
The San Gabriel area in Los Angeles is known to house the best Chinese food in the city, catering to different cuisines in China and as well as a welcoming Asian community, it is filled with Chinese signs and words that make you wonder if you’re still in America. As we approached this Chinese restaurant called “Tasty Zone”,  It was evening and the streets were busy with cars driving by, people walking into different restaurants for dinner and then...there was us. Me, Julian and Sarah. Three 7500 staff members from different Asian backgrounds who wanted to challenge each other to try new Asian foods.
The next dish was stir fried rabbit, this looked really suspicious to Julian because he couldn’t tell what it even was. Julian picked it up and shoved it into his mouth, he immediately said that he enjoyed this more than the chicken feet, however, he did not want to try it again.

The next dish was the pig’s ear. I personally love eating pig’s ear so I was intrigued to see what Julian’s reaction would be. I grabbed some and placed it on his plate, he started to taste it and heard some crackle in the soft bones and said: "I hate it." He commented that the texture was too weird. Last to try was pig’s blood soaked in chilly oil. This looked the least appealing and appetizing to Julian, I grabbed a nice spoon full and placed it on Julian’s bowl, he closed his eyes and placed it into his mouth, he started to chew and spat it out immediately. He said “I’m totally not Asian enough for this!”  However, Sarah had tried the pig’s blood before and she loved it!

“I’m totally not Asian enough for this...”

​It was a very fun challenge to do and I’m glad that we all went. It was also a great way for us to get to know each other more while we tried new food.
-Cindy Long 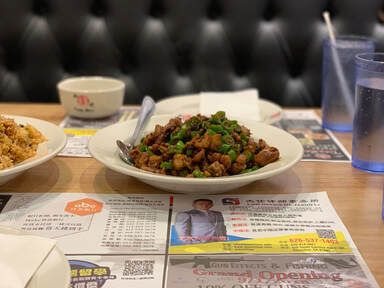 So, let's getting something straight. I am a Filipino American, which means that I am Asian, just thought that I'd get that out of the way. Now that that's been said, I'll give a quick summary of how I felt about this whole debacle.

I was to Tasty Zone with Sarah and Cindy to try a few of dishes for the first time, not knowing what the dish it was until I had already eaten a mouthful. Looking back, I’m thankful for the fact that there was a neutral dish of fried rice for me to go back to, but it wasn’t enough to hold me over from the dishes that followed. First was cooked frog, which honestly wasn’t too bad. It had a pretty nice taste to it, but I had trouble eating it due to the significant amount of bones in the dish. It also had a slight kick to it, with each following dish cranking up the spice level. ​ 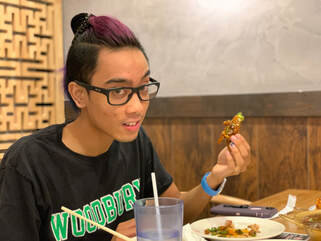 After that was cooked chicken feet, which I did not enjoy (this will become a pattern). The texture was too strange for my liking, and once again the bones made it irritating to eat. It had a slimy feel on my tongue, and it was difficult to find the clear taste of it due to the spice level. The following dish was some form of spicy rabbit. It was instantly familiar to me, since I had eaten rabbit in the past, but I didn’t like it in the past and I didn’t like it then. While it wasn’t as gross as the other dishes, I just personally don’t prefer the tough texture of the meat.

Next was pig ear, which had me biting into a strange, loose meat texture that still had a slight crunch of soft bone. The best way to put how it felt trying it was as if I was biting on the cartilage of an actual ear. It was not pleasant, and I only had one bite.  Lastly was pig’s blood. These brown, squishy rectangles were, in my inexperienced opinion, very hard to eat. 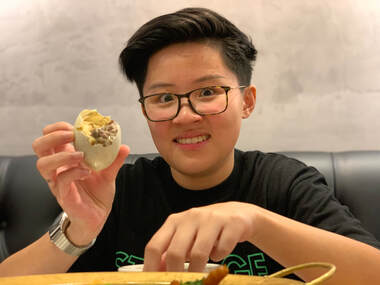 While Cindy and Sarah were both completely fine eating the Chinese food, I was very much suffering, but it was still an experience that I will remember for a long time. I did end up trying Balut for the very first time. It is the infamous Filipino egg dish that non-Filipinos know, and honestly, I was a tad nervous trying it considering that I've only heard the worst about it. To my surprise, I really enjoyed it, and it gave me a somewhat petty satisfaction watching Cindy be unable to eat it.

Overall, I had a new experience that ended with me loving a duck embryo dish. Who knows though, maybe one day I’ll try the pig's ear again with a better outlook, or not. Probably not.
-Julian Danan
​
Tasty Zone
Address: 523 S San Gabriel Blvd, San Gabriel, CA 91776