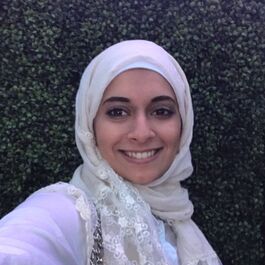 Iman: I can tell you many reasons why someone would want to learn how to cook; it can be trying something new, loving food or being just too broke to eat out. Maybe, they just hate fast food and are used to their mom’s cooking, while visiting another country. For me, it was all the above, because I really miss my mom and her cooking in my country of Saudi Arabia.

I never knew how spoiled and lucky I was until I had to live independently to study abroad. I feel offended when I eat fast-food because I’m hungry and it is the only choice with my sad budget. While I am away, I had to learn, not just the love of the process of cooking, but how to love the result, which is food, of course. During my cooking journey, I discovered a passion of hosting and watching people enjoy my food. I have learned to cook chicken, meat, fish, shrimp, and crab, so I can now call myself an expert. After all, I do have my husband’s word for it.

I recently made a new friend, Beka, who never cooked dinner on her own before and wanted to learn how. I was so excited that I found a cooking student and a guest that I can host and feed. She was also excited about the idea, (she is super nice and always acts like she is excited). I invited her to my apartment and taught Rebekah how to cook Chicken Zurbian (with its yogurt cucumber dipping) and zucchini pie. 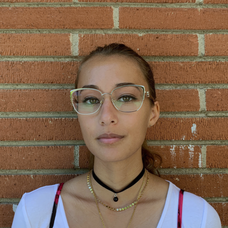 Beka: ​I don't cook. That’s not to say that I can’t cook; I make a mean egg, decent pancakes, and some tasty French toast. But outside of breakfast food, I’m out of my element. I can use a knife, but whatever I chopped looked like I did so with my eyes closed. I can use an oven, but at 20 years old, I'm still afraid of putting things in, and getting things out (I can’t be the only one. I mean it’s a giant whole of heat).

​I am capable of cooking, but honestly I’m much more of a “frozen pizza or oatmeal for dinner” girl. However, I met a classmate and friend Iman she told me she cooks every day. It seems like in terms of cooking, she could be my cooking guide. Because of this, I would do my very best to learn from her. 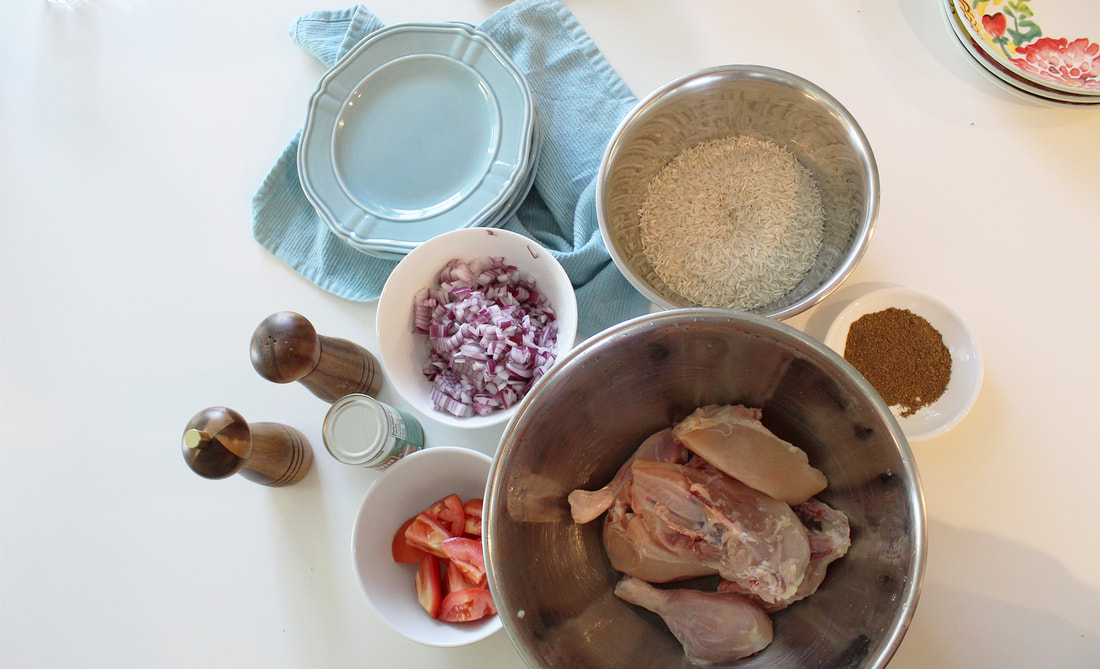 Ingredients for the lesson
Iman: I was nervous the night before the day of the “cooking lesson”. Because it wasn't going to only be Beka,  but also our classmates Rocky and Marta (photographers). I was not sure if I could teach them how to cook because I haven’t done that before. My mind was making up weird thoughts and excuses, like what if there are cultural things that I should know before having some classmates over?  I never hosted an American in my apartment, and what if I forgot how to speak English for a moment (because my English always lets me down when I’m nervous)?  However, I already gave them my word, so I had to shut up mind and make sure I have all the ingredients. I put the frozen chicken in the fridge to defrost twelve hours before cooking, which is the best way to defrost a chicken. Then I went to sleep after I decided to go with the flow the next day.

I woke up early and said goodbye to my husband and baby girl. I waited for Rebekah, Marta, and Rocky. They came right on time at 9:00 am. They were very kind and nice. They also complimented the apartment, the furniture, and the coffee corner, which gave me more confidence. I thought it was too early to cook chicken and rice but we had limited time together with class schedules. So, after I offered water and asked them to make themselves at home, it was time to start the lesson…So what now?
Beka: When I arrived at Iman's apartment to cook, I have to admit I was taken aback. Her apartment was adorable. Wonderfully decorated, an espresso machine, and cute family photos on the fridge. It was a huge contrast to my “home”, (dorm room) with poster filled walls and a stuffed animal filled bed. Iman was already busy, asking us if we wanted drinks and decorating the table fit for a Pinterest board. “She’s so adult,'' I thought to myself in awe. Despite my nerves, Iman assured me that everything would be fine, and with that, the mature Iman sent me on my way to cut some zucchini for the pie.

Cutting the zucchini went fine, and by fine I mean I didn’t cut one of my fingers off (look, I’m an artist I need ‘em don’t judge me). In juxtaposition to my “cutting”, Iman was whizzing around me. Iman was cutting onions, getting bowels out, and making the pie dough. After she finished all of that, I finally finished cutting my zucchini. Iman then instructed me on how to place the dough in the cooking pan, bringing the edges up to create the pie crust. For the most part that was easy, although at times a bit of a challenge because I didn’t want to break or unevenly distribute the beautiful dough.
Iman: Zucchini pie is a tasty dish that I learned from my best friend's mother. She used to make the dish for us every time we would visit. It is so creamy, cheesy with a crunchy crust. The ingredients are: zucchini, onions, garlic, whipping cream, lots of mozzarella cheese, hot peppers, eggs, salt and pepper. For the crust: flour, butter, and water.

​Beka: Iman and I started frying and stirring vegetables on the stove. I was confident in doing that, but only because that was one of the few things my parents let me do in the kitchen when I was little. Eventually, we put some chicken in a giant pot and began stirring it too. The chicken was for the zurbian, and Iman told me that if you add spices and rice in bit by bit, you’ll get cool color variation. 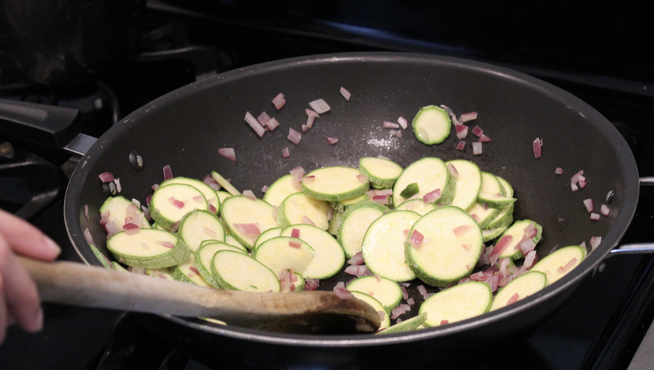 Frying zucchini
Then we got to add some more spices. We needed to get pictures of me and Iman cooking for the article, and we all thought it would be cute (and memey) if we had a shot of sprinkling salt on the food. As I posed, I tilted the salt for too long! I thought I was being charming but really I was just being a goof who was over salting chicken. Iman rushed to stop me, but it was too late. The salt was already on the chicken, and the damage was done. All I could do was hope that I hadn’t completely ruined the chicken. 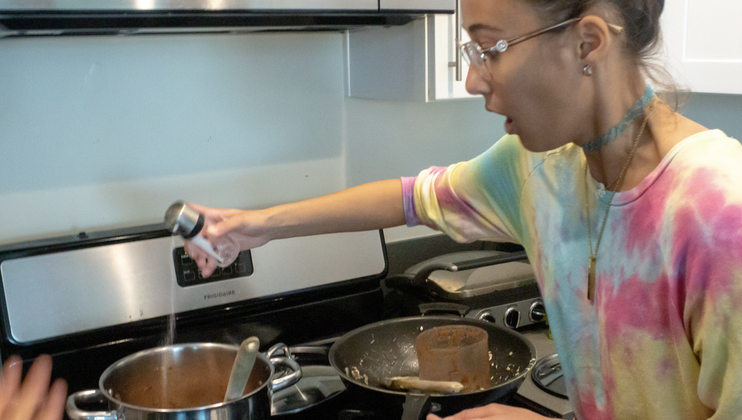 Oops...Salty chicken!
Iman: Zurbian is a Yemeni dish that contains mixed rice, it is similar to the Indian chicken biryani, with small differences in spices and ingredients. I always use my mom’s recipe, but when I looked it up in the internet, I found out that mom did a lot of shortcuts that made it easier and faster, which is always best for me. So according to my mom’s version of Zurbian, the ingredients are: a whole chicken, Basmati rice, tomatoes, tomato paste, onions, garlic, and the Zurbian spice mix. I chopped a big amount of red onions that is enough for both dishes. I asked Beka to start cutting the zucchini in very fine and thin slices for the pie, I was not sure of her abilities to do so, because I remember when I started cooking my slicing was far away from thin and fine, but she surprised me with the result. Then I asked her to blend the spices with the tomatoes in the food processor for the Zurbian.
​ 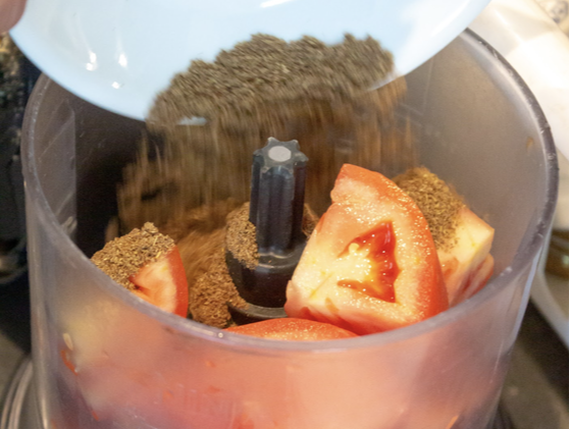 Spices for the Zurbian
Beka: We finished getting everything ready and left the food to cook. Iman excitedly asked if we wanted an espresso as she prepared the table for our meal. We talked amongst ourselves, but my eyes would occasionally wonder to the stove.

“Have I ruined the meal?”, I’d wonder to myself. I couldn’t worry though, because Iman asked me to help her make the yogurt cucumber dipping. That was easy, at least on my part, because all I did was scoop the yogurt and sprinkle some fun “decoration” on it (I think it was... Mint..? I don’t know I’m not fancy).

Finally, we got to enjoy the fruits of our labor and eat. The Zucchini pie was delicious! It was my favorite thing we made, and tasted a lot like a quiche. The crust was flaky and tasty, as the filling was cheesy and soft. Then, there was the Zurbian (remember the over salted chicken)? Luckily, it tasted great, and at least to my unrefined taste buds. I enjoyed dipping it into the yogurt cucumber dipping. It was a refreshing and light side to add to the Zurbian.
Iman: We continued with the recipe; it went great unexpectedly. Beka, Marta, and Rocky enjoyed the food, except for the pepper incident that set Rocky’s mouth on fire. The food looked good and it was ready at exactly 10:00 am! It was super-fast.  I am always in a hurry, and this does not make me on time or anything. I’m always running to nowhere, I am in a hurry. So, I think, regrettably, I forgot for a moment during the cooking lesson that I was teaching, and just went on my own pace while cooking. However, If I would do it again, I will be calmer, and I will let Rebekah do everything from scratch, so when she goes back home she would have a complete idea about the recipe we cooked, and maybe more love for cooking. 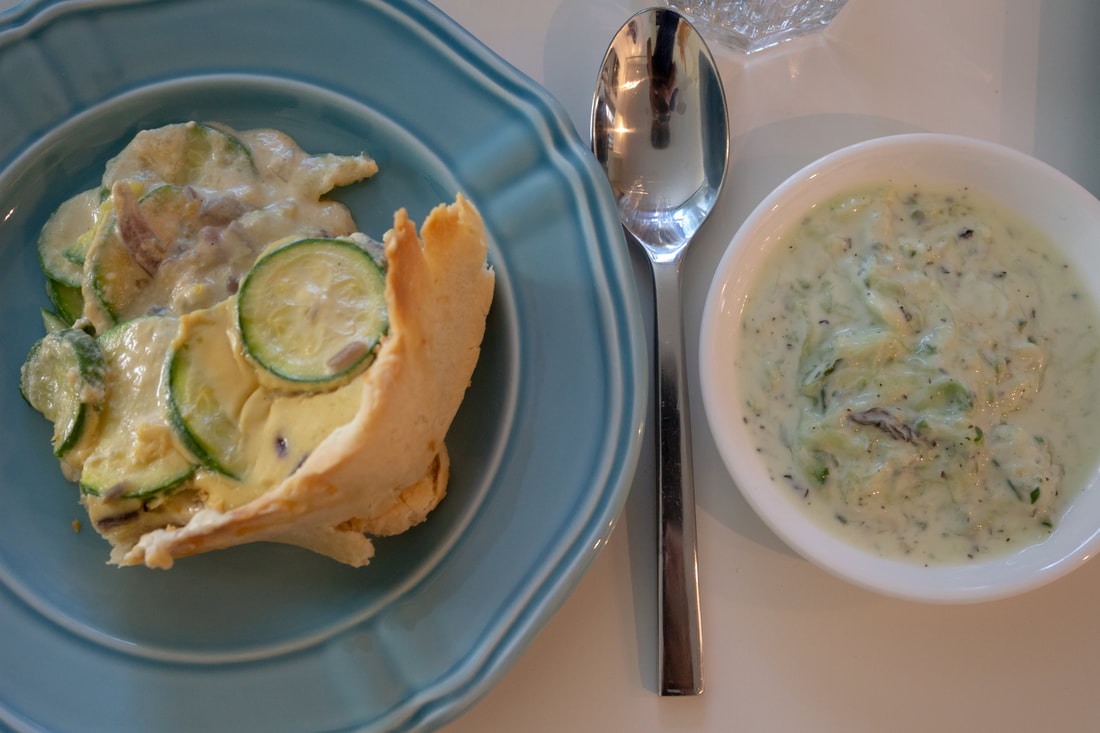 The final meal
Beka: All in all, I had a great time learning how to cook. Iman was very sweet and fun, which helped me relax as well. I may not ever be a cook like Iman (Let's be real, I know I won’t), but I can see myself pulling out a cookbook sometime, and when I do, I'll just have to channel my inner Iman. 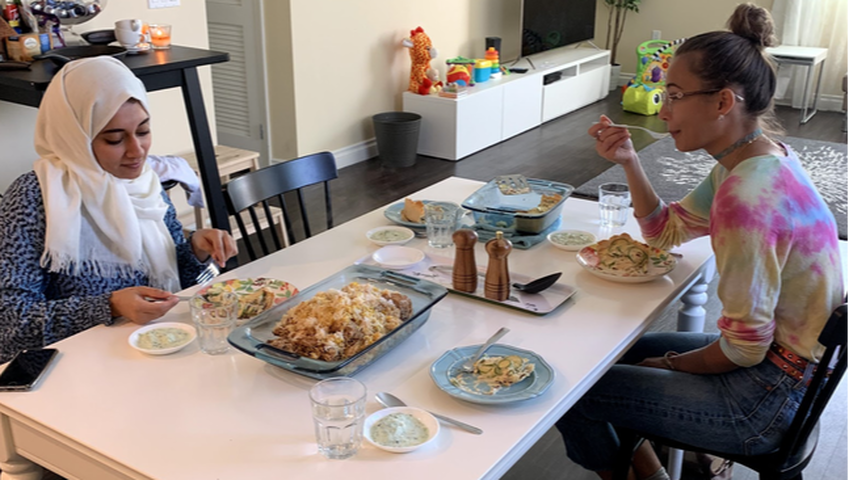