Written by Addi Staubus
​Photos by Franco Lema
Los Angeles is best known for its booming entertainment industry. Most of today’s popular television shows are filmed in Studio City, only a short drive from Woodbury University. One of the most important aspects of creating a television series is the soundtrack. It is not something the typical viewer consciously considers, but it makes or breaks a show. What would Grey’s Anatomy be without tear jerking music that makes you want to dramatically gaze out a window and sob about a rare medical condition you do not have? In this context, music is used to enhance the emotions the viewer experiences from the storyline. Choosing the perfect song is no easy task.
This is where Danielle Mignogna at 411 Music Group steps in. 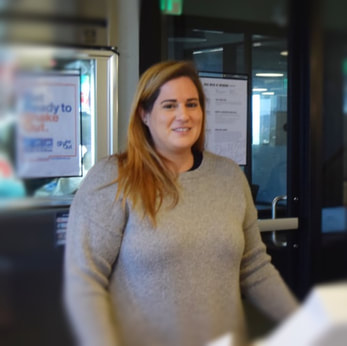 411 Music Group is located at the Burbank WeWork, which is a coworking space that allows startups and young professionals to network. Office spaces range from private to shared tables. As I sat in the chic, grandiose lobby and waited, I people watched. Watching the people of WeWork is a lot like stepping on an ant pile and observing the chaos that follows. It is a fast paced environment where everyone has somewhere they needed to be five minutes ago. Security buzzes me up to the 12 floor where I temporarily wait. I pass YouTube star Garrett Watts as I get out of the elevator. I’m offered kombucha as I’m shown to a waiting area. Danielle emerges from their office two stories above right on the dot and takes me into a private conference room to interview.

​I begin by asking her to break down what it is that she does. Danielle is the business affair manager of 411 Music group, and is one of the most competitive in her field. Danielle has helped grow 411 Music Group into the successful company it is today. When asked what 411 Music does, she explains that it is a music publishing company, which deals with the ownership side of music. They represent artists and composers, and pitch their music out to their clients. These clients range from music supervisors, producers, and television directors. From there, a price is negotiated, the license is created and the music is used. Danielle was a music supervisor prior to her job at 411 Music Group, so I asked what lead her to make the switch. Danielle explained:

“Music supervision is why I moved out here. I was living in Florida and did Berkeley College of Music’s online certificate program for music supervision and just fell in love with it.”

Once Danielle completed the program in Florida, she made the big move to Los Angeles. We discussed the importance of networking in her field and how attending licensing events helped her land her current job with Kristen Agee, the founder of the company.  Together they have grown 411 Music Group from their dining room table to a international company with members of the team pitching in Switzerland and the United Kingdom.
I asked Danielle what her her ultimate music industry goal is. Her loyalty lies with 411 Music Group, as she wants to see it grow even more. Danielle would like to see 411 Music Group’s artists touring the world. Danielle says, “I want to go to [their clients’] shows, root for them on the sidelines and promote their music— really being partners in this.” The coolest part about Danielle’s job is her exposure to talented musicians. She is the only one on the team that did not grow up learning an instrument or major in music— she grew up playing sports. She has always loved music and goes to shows all the time. More than anything, she loves seeing their artist perform.

“It’s really great to see an artist perform that I’ve been in contact with. We did an agreement together and we are pitching their music. If we got them placement on a show, that is so nice to email them and say ‘hey we got you this placement on New Girl!’”

Nearing the end of our interview I ask Danielle one final question: If you could give advice to your younger self, what would it be? She laughs, “Learn an instrument. Your body will give out on sports. I tore my ACL… and yeah. Now my knee never feels good and I am scared of basketball. I feel like you can play an instrument until the day you die!”​

We laugh as she jokingly claims she is learning to play the recorder, but explains she is obsessed with the song “Soy Yo” by Bomba Estéreo, which features a recorder. Danielle plans to surprise her best friend and learn the song for the next concert they attend.