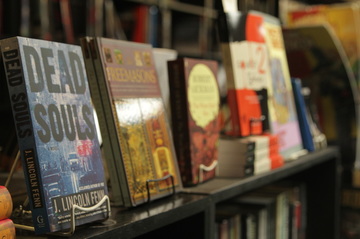 ​In an interview with the LA Times, Tim Burton described his feelings about the city of Burbank, his hometown: "I still get the creeps, I still get a funny feeling driving over to Burbank.”

​Burbank is home to more costume shops, Halloween stores, and other storefronts with dark themes than anywhere else in LA County. If you’re ever on Magnolia Blvd. in search of a Scream mask or costume makeup kit, keep your eyes out for a man with the long white hair of a 5,000 year old immortal wizard. You can also drop in the bookstore Dark Delicacies, and find Del Howison, and he will happily help you find something to enjoy in the horror genre. I sat down with Del and wife Sue, who handles most of the business in the back of the house. They have curated an amazing space, and he explained how they’ve survived the zombie apocalypse of big box stores and Amazon; their store has remained a staple within the world of horror literature and film. ​ 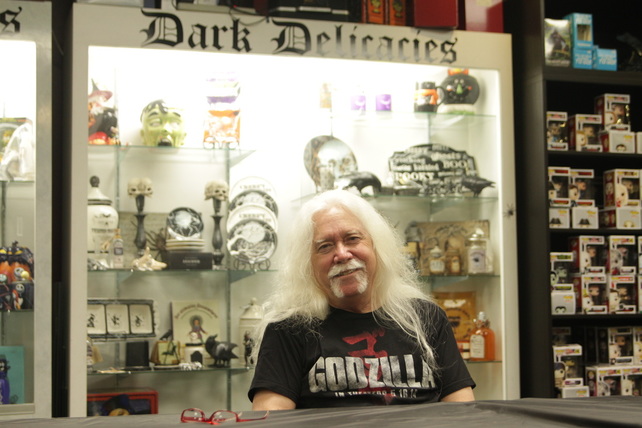 Del Howison at Dark Delicacies
What brought you to Burbank?
“I grew up in Detroit, I moved out here to act. Like everybody else, I did a lot of equity waiver theater, then I had this thing about wanting to eat once a day. I started working in the garment district, and I ended up working down there 16 years. But it gave me the freedom I needed to pursue my acting- which finally fell by the wayside, because it was too much work to do while holding a job at the same time.”

“The store started when Sue and I got together. We were both into horror and wanted to find tchotchkes to decorate our house with, and at that time there was nothing. None of this stuff existed. About all you could find is that stupid ass dog-gargoyle with the wings that you see, you know, it's really ugly.  So, we were thinking, 'There must be others like us who are into this stuff.'  So, we did a couple of tables at trade shows. After doing two shows, we found a storefront, took our own collection and $5,000 and opened the Dark Delicacies. It will be 22 years we've been open in December. It's a long term mom and pop operation.”


​When you guys first opened were you primarily a bookstore, or was it always horror memorabilia in general?
“It was primarily a bookstore and some gift-ware. We had one t-shirt rack in the middle of the floor, and one wall with racks on it that looked like you could drop a bowling ball down it and not hit anything.”

And you write as well.
“I do, I have short stories in other people's books, and I've got anthologies out that I'm the editor of. I think I've got 10 or 11 books out now.”
When you came out here to act, did you always have it in the back of your mind that you wanted to make movies? Did you know you wanted to work in horror?
“I enjoyed horror and I loved to work in horror, but I just wanted to work in the industry. Once you get in the industry you can kinda find your way around, dig your way out of wherever you are and go into another direction. You learn things once you start making connections with people in the industry, like, 'Hey kid, why don't you come and work with me?' or something along that line. I just wanted to work as an actor first and found my way.”

So, writing came after the desire to act?
“I was a journalist in the Army and I went from nonfiction to fiction. I had written a few short stories and stuff, nothing published, but just writing for keeping the chops up. Once we opened the store, I got more acting jobs. Our customers were often industry people. So, they'd come in and say,  'Oh hey, I can use you in something.'  On my IMDB, I've probably got 22 films as an actor and 5 films as an assistant director, and you know that kinda thing. They came to Sue and me back in those days when The Learning Channel was actually the learning channel, with real documentary programs and that type of stuff. Every program that was put out, like, 'The Real History of Vampires', or whatever, would have a scene with people like us as talking heads. I was normally on those shows, with people like David Skal, a long time writer for Stoker and Chaney. It was the usual suspects over and over. They'd put a purple light on you, make the background all black, and say, 'Tell us something spooky.'" 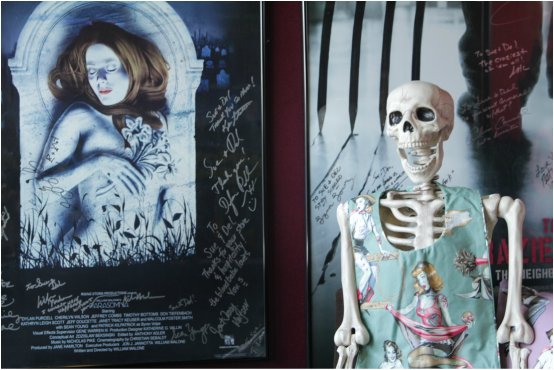 Now you guys have a film imprint, right?
“We signed a deal with Vega Baby, who have put out a bunch of indie films. They did the Dave Navarro documentary about the homicide of his mother. They did the film Everly with Salma Hayek."

Do you have ambitions to produce any of your own stories?
“No. I'd like to see some of them produced, but I don't want to be a producer anymore than I want to be a publisher.”

You'd just like to be the creative force behind them.
“I would like to do that. I wouldn't mind script writing. I'd like to work on making that transition, but as far as producing the film I'm not interested. Maybe down the road somewhere, directing, because lord knows there's not enough directors out there right now.”

Do you still write?
“All the time. My last book that came out was one I edited with Clive Barker, it was an anthology of short stories, based on the movie Nightbreed, and his book Cabal. At the end of his book, the city that all of these misfits, for lack of a better term, live in, is destroyed, and they're scattered out into the world. So, the anthology picks up after that, and each story is about monsters they encounter as they wander and try to reunite.” 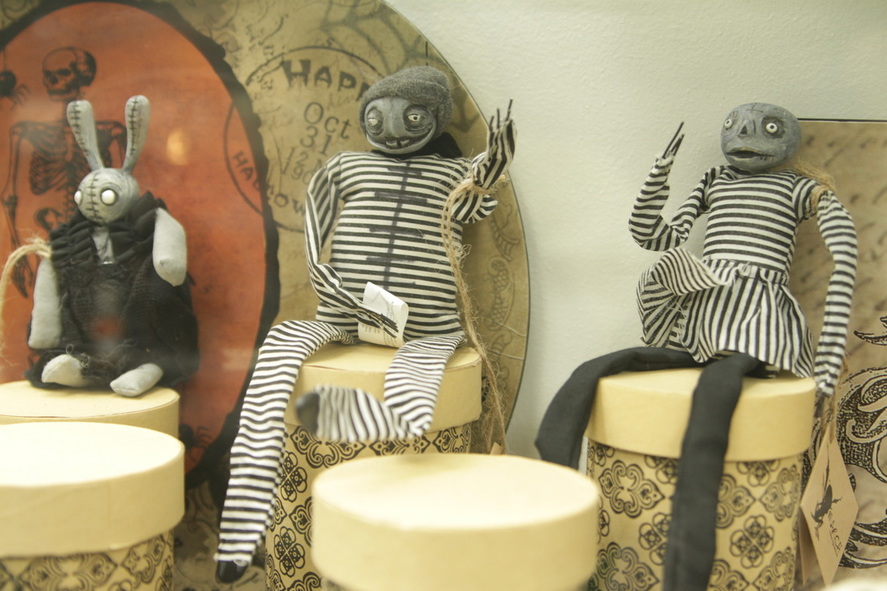 ​Do you do business on Amazon and Ebay? Is the internet hurting you guys?
“You know, we've been through all the eras as a book store. We've been through the big box, Borders and Barnes and Nobles coming up and killing the small guy. We've been through the e-book guy killing the bookstores, and now Amazon going to the brick and mortar model after trying to destroy them. Yeah, we've been through it all - the thing is, the only way a small indie can survive is if they find a niche. It's a special mystery store that does this, or a sci-fi store, or whatever, and I think we found our niche. I don't think the big guys can duplicate it, and you certainly can't duplicate it online. It's an experience. We do signings and events every week, with people in the genre. We bring them in for the people to meet, and you're not meeting them in a convention setting where you're paying $60 to get a photo signed and a thank you. You get to come in and it's a pretty relaxed and intimate atmosphere. So, there's a lot of stuff happening. We just did a signing for the blu-ray release of Tales Of Halloween, which is a horror film anthology. We brought in more than 20 people from, producers, to directors, actors, set people, everything.” 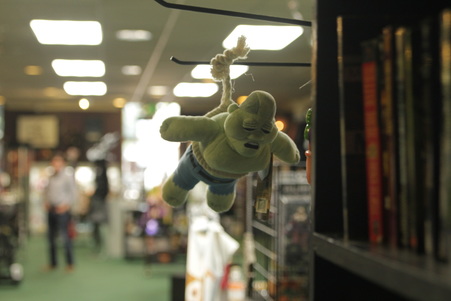 What movies or books actually frighten you?
"When I was younger I read things that really bothered me, fright-wise. I think it's a little hard when you get older to really be frightened, especially in a film, when you know how it's made. I think the best I hope for now, at the age of 63, is a really good feeling of dread, a well-made project whether it's a book or film, a sense of unease, something that feels like there's something under the skin scratching that you can't itch, something over your shoulder or in the peripheral of your eye. It all comes down to the craftsmanship for me now, the writing of the book, like Boy's Life or Dan Simmons' Summer of Night, or Song of Kali, for example.  I think my main drive now, as far as the books go, is to let people know there's a lot of great horror out there being written besides King, Koontz, and Rice. Get away from the big three, and there's a lot of other good writers."

What do you love about the genre, what is it about horror?
“I think the magic of horror is, you can talk about anything using the horror tropes. You can talk about politics, like George Romero and his zombies, or consumerism. You can talk about prejudice, and the oppressed group is zombies, or vampires, or werewolves, and nobody gets pissed off, but they get the lesson. I love the fact that horror is always the most current genre in pop culture and it changes what's popular and changes with what's going on in the world. When 'Nam was going on, it was our living room war, it was the first war we got to see on TV as it was happening. That was a very frightening thing, not to mention the rise of color TVs, which didn't help things any. But it was in your living room, you were eating dinner, and CBS news was showing you combat footage that just happened, and you'd know it was your people out there getting shot. Horror movies and novels were at a peak during that time, because when you're watching something like that, you have no control over it. But when you're watching a movie or reading a book, you can close it or walk away whenever you want. I have no say over the television. We moved on to the beginning of the AIDS epidemic in the early 80's. This paralleled the rise in the popularity of vampires, a blood born disease, the evil using the blood. Often, they do what ever is popular for a time, like vampires, until they get silly and burn themselves out, and vampires begin to sparkle. Then what happened? 9-11, buildings collapsed, you saw all this footage, and all these people walking out of the buildings with ashes covering them, which inspired the popularity of stories about zombies.”

So, what scares you?
"Right now, the political climate, and the direction this country could go in."
Dark Delicacies
www.darkdel.com
3512 W Magnolia Blvd.
Burbank, CA 91505