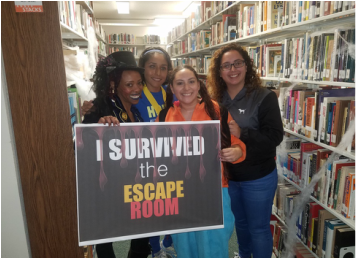 Team SOAK, winners of the Escape Room challenge
​At San Diego Comic Con 2015, through a sea of smelly nerds, apathetic actors promoting random shows for a paycheck, and girls dressed up as Harley Quinn, there laid a rather interesting tent.  To promote their upcoming title in the video game titan known as Call of Duty, Activision had set up a pop-up escape room. Inside this tent stood two rooms: a bar and a burlesque club. In the bar, I had to search every nook and cranny for clues to open a safe. With almost no time to spare, my group opened the safe and were chased out of the room by actors dressed as zombies. From that moment on, I fell in love with escape rooms. And I wanted to make my own.

​Growing up, I’ve always loved video games and horror movies, so getting to play out a combination of both of those in real life obviously appeals to me. 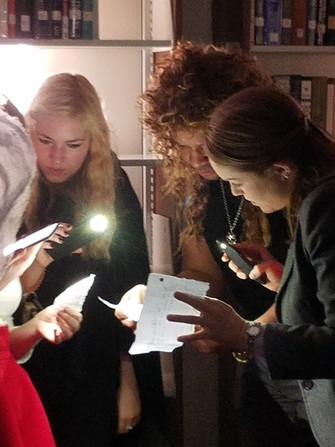 A team searches for clues...
While talking to my supervisor, Risa Williams, about 7500 Magazine’s Fear Fest, I coyly brought up the idea of renting an escape room. ​She agreed that it would be fun, but explained our budget would not cover renting a mobile escape room.  But before I could be disappointed, she asked me if I could design one of my own.  Without thinking, I said, “Sure, I could do that!”

​“Great,” she answered, “Give me a plan by next week.”
​
What have I gotten myself into? I thought.

For some help, I contacted Bob Glouberman from The Virus Room presented by Get the F Out,  an escape room located in sunny Burbank, California. After asking him what’s important to planning my escape room, he advised:

​“To me, it’s creativity and immersion. Immersing you completely in a different world and making it seem like you’re a character in a movie or a video game."

After asking how I should begin, Glouberman suggested, “If it’s not an interesting story, it’s not going to be an interesting escape room.  There needs to be a beginning, middle, and end..."

"​It’s one thing to put someone in a room with puzzles, it’s another thing to immerse someone in a chamber and make them feel like they’re really there.” 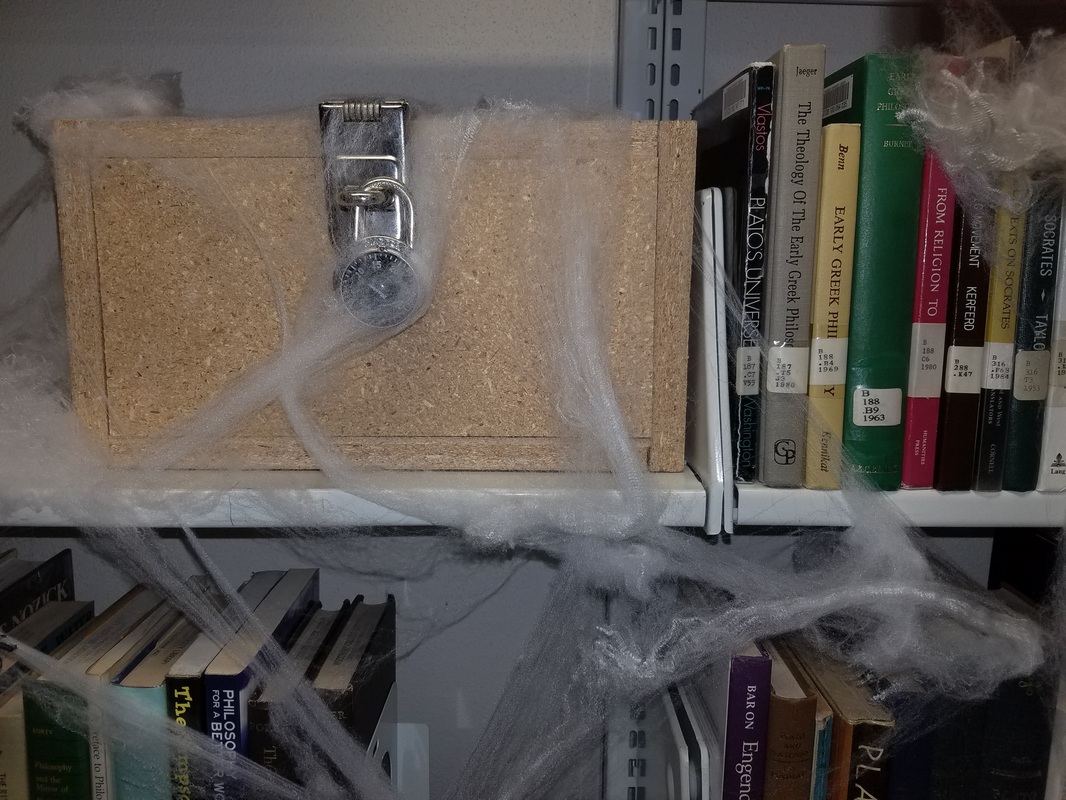 And so, my journey began.

The first obstacle in front of me was finding the perfect location.  Since we were planning our Fear Fest outside of Woodbury University’s library, using the library seemed ideal.  For those who don’t know, the library of Woodbury University is supposedly haunted.  Even if you’re not into the paranormal, the architecture of the building cries out “old and creepy.”  Our own Erik Danryd managed to tag along with real-life ghost hunters searching the library, in case you are doubtful of the alleged ghouls.  Either way, I knew the library would be a scary basis for my escape room plans.

Unfortunately, the best room I could use happened to be the most bland room possible; one filled with bookshelves and nothing else but boring, off-white walls.  Knowing this was the best location, my team and I tried to make lemonade out of lemons.  Our idea was to hide hints in the books.  I came up with the idea to use a “robot guard,” since the room’s door had no lock.  And from there, the backstory came into fruition.  Killer robots invading earth would execute teams unless they succeeded in escaping the escape room in under 15 minutes. 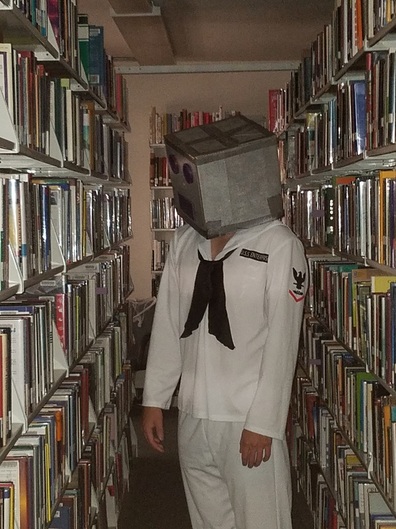 ​​With the location secured, backstory written, and the initial design plan finished, I did a test run on my fellow 7500 staff members.  And... it went terribly. The test team failed and was metaphorically killed by robots.  They claimed it was way too hard.  Out of four steps to win, they achieved only one before 15 minutes was up.  Not only was it too difficult, it wasn’t very interesting.  The teams complained that all the clues were written on slips of paper and they wanted different objects to maneuver.

With this new criticism, the experience was altered.  Instead of all the hints being hidden in between books, they were put inside the mouth of a skeleton, in a robot head that participants are forced to wear during the introduction, and on top of a picture frame.  All of these hints revealed a secret number on a combination lock on a box (built by 7500's Brandin Babin out of scrap wood) that contained the last puzzle: the phrase needed to escape.  On our second test run, the participants had a much more positive reaction and escaped in under 9 minutes!

At the Escape Room launch at Fear Fest, everyone agreed it was a success.  The majority of participants not only had fun, but were completely into the idea of running around in a dimly lit room full of books finding clues.  It may not have been an escape room with amazing production value, writing, or intuitive puzzles, but I’m proud of the experience that we gave to the party-goers.
​
My advice for future DIY Escape Room Builders:
For inspiration, check out: The Virus Room.