The Next Big Name In Hollywood:
​
Emily Ann Franco

Written by Damien Sloan and Photographed by Jeliza Dolatre
Do you know the thousands of names that show up after the movie has ended? The thousands of hardworking people who came together to create a piece of entertainment for the masses? The part that sadly cues everyone to leave the movie theater? Well I know an individual who will one day be one of those names attached to your favorite movie: Emily Ann Franco. Emily is a mere twenty-one year old but her experience in film displays that of a woman beyond her years. She grew up in San Diego but moved out to L.A. in order to pursue a career in film. With her strong spirit, kind demeanor, and hardworking work ethic, she has already made her mark in the film industry, one set at a time. 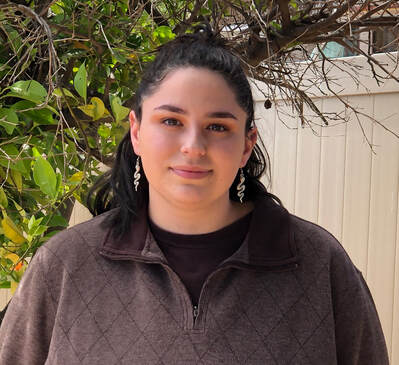 A photo of Emily in the background of her family's home in San Diego, California.
Emily told me her dreams started in sound engineering but when she didn’t get into the school of her dreams, she settled for film school where her true passions blossomed. She started by being a Production Assistant on many thesis sets but she started to get into Assistant Directing on small film projects her sophomore year of college. But then of course, Covid-19 hit and everything stopped film production wise. But when it slowly started up again, she was given internships that led her to where she is today: going to Atlanta, Georgia for the summer for a full-expense paid film job.
​
When discussing how she got to where she is, I asked Emily what type of advice she would give someone who is entering the film industry and wants to get to where she is. “Don’t take anything personally and never be afraid to ask questions. It’s better to ask questions than mess up and waste more time since time is money on set. This also means you shouldn’t pretend to know that you know everything since you’re constantly learning.” This also had us discussing what advice she was given when she was first starting out which was simply the phrase “Enjoy what you do.” When it comes to careers, you always want to choose something you enjoy. But when it comes to the film industry, you don’t immediately know whether or not you hate it or love it until you have been part of the film set. It’s a very stressful environment that takes up a lot, if not all of your time. So I asked Emily what she does in order to balance work and life.

She started to discuss how you truly need to prioritize what is important to you in two aspects: life and work. She makes sure she has a priority list for both and that she has essentially two number one priorities in both categories. For life, she likes to prioritize maintaining her friendships and spending time with her friends as much as possible. And for work, she lists out what needs to be accomplished first in order to maintain a stable work flow. This is mostly for pre-production work since she enjoys producing film projects which mainly involves everything needed paperwork-wise before a film set can occur. During a film set, she maintains a morning and night routine in order to make sure she is taking care of herself and not let the set completely drain her. The routine consists of mostly a skin care regime in order to make her feel “like a human”. 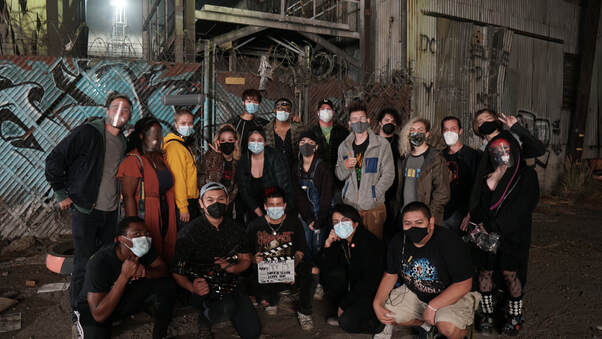 A crew photo of the senior thesis production "Rock Candy" directed by Damien Sloan and produced by Emily.
Besides discussing film, I asked Emily what her thoughts were on moving away from family in San Diego and into the bustling Burbank area. She enjoys the independence she has and that feeling of being able to be a real adult: living on your own, feeding yourself, paying bills, the whole works. I then asked what type of advice she would give to someone just moving here, also trying to be an adult and pursue their dreams. She discussed how you need to be content with where you live since most of your time will be at home. She also went on to say how your house and how you live reflects your work ethic as well as your inspiration so it's important to maintain it. Essentially, you need to make yourself a home away from home.
​
I thoroughly enjoyed talking to Emily not only about her experiences in the film industry, but about getting to know more about her morals in life. She is one of my dearest friends so it was nice to learn certain things that I would have never even asked her to begin with hadn’t it been for this interview. We always go on talking tangents for hours at a time, so it was a bit difficult to try and make sure we were consistently on track for the interview. All in all, I am very glad I was able to interview her. I do truly believe she is going to be an amazing producer for a major company one day in the near future since she already is one now. ​