Written by Briana Pong
Photographed by Wail Balkhi and Alyssa Pieprzyca
In the rather confined space of Woodbury’s library courtyard, red bricks and empty tables surrounded Emi Motokawa. This petite Asian American artist dressed in a gray cardigan exuded a quiet, self-assured nature. The soft and gentle patter of water from a small nearby fountain was a soothing backdrop to Emi’s thoughtful voice as she laid out her pop artwork on the chairs and tables. I looked around at all the pieces arranged as if they were part of a little private outdoor art gallery and realized an interesting point: With a unique mix of hip hop, anime, and Buddhist concepts integrated into many of her paintings, Emi proves that diverse cultural concepts can be connected in more ways than we think.

Emi is an artist residing in Monterey Park whose work can generally be characterized by figures with huge, alluring, doll-like eyes that seem to stare right back at you from the canvas. In 2016, Emi was selected by the LA Metro to create a painting depicting her interpretation of Monterey Park, which was then displayed on Metro’s trains and buses all across LA County. She adds a playful twist to Buddhism with the intention of “tickling your soul” and putting a smile on your face. 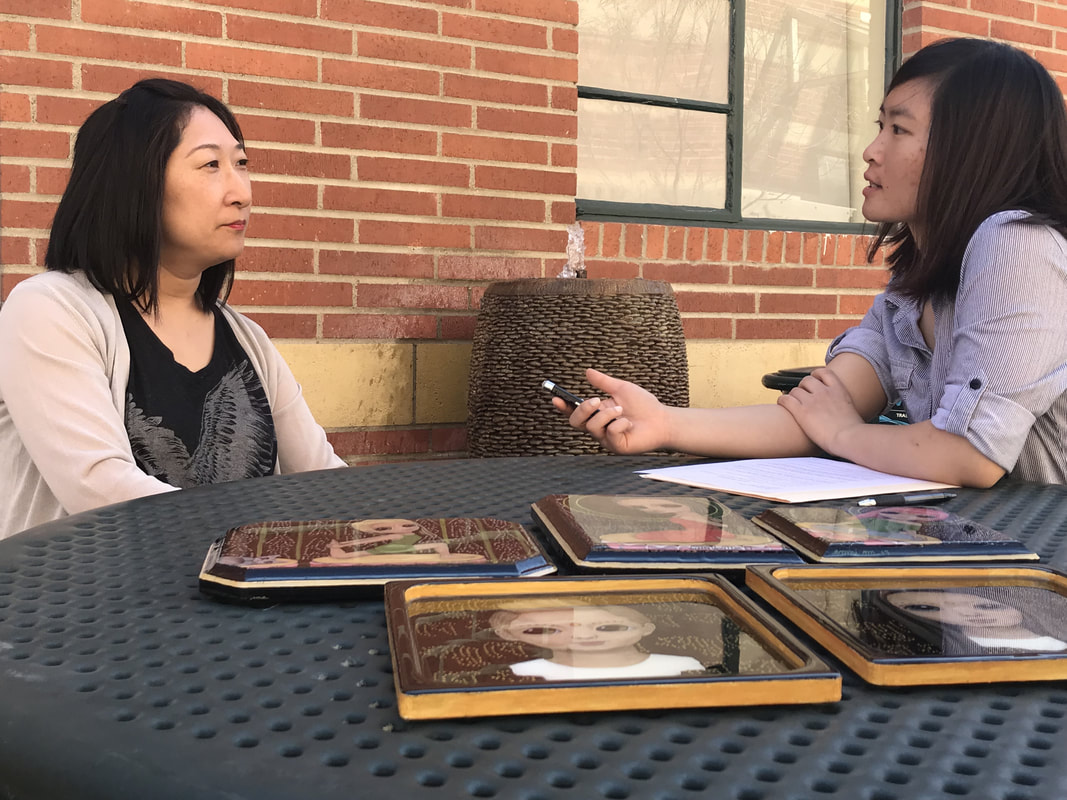 Interviewing Emi
Can you share a little bit about your background?
“My name is Emi Motokawa. I’m of Japanese and Korean descent. I was born in Japan, though, and moved to the States when I was seven years old. So most of my education has been in the U.S. I didn’t study art. My parents actually opposed it, but then after all the run-around, I came back to it and I do art on my own.”

What inspired you to become an artist?
“I think as a child I was always creative, so that had been an element in my life. But studying Buddhism in Japan was the big factor because when I learned about Buddhism, I thought it was so cool with all these universal concepts. I wanted to be able to take that image onto canvas and share that.”

"My inspiration would be the universal truths—like the studies of Buddhism—but also people because life is about people and interactions among them that create everyday life and magic." 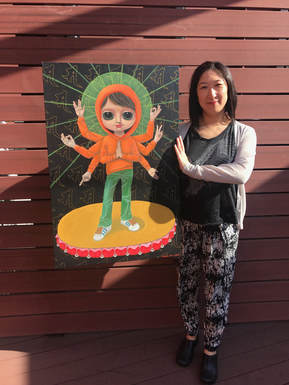 Regarder of the Cries of the World
Who or what are the biggest sources of inspiration for your work?
“My inspiration would be the universal truths—like the studies of Buddhism—but also people because life is about people and interactions among them that create everyday life and magic. So that’s important to me and that inspires me—learning about people, including myself. I guess generally my art [has] a Buddhist context and influence, but the imagery is hip-hop meets LA meets anime. And I’m trying to modernize all these old concepts—Buddhist concepts—so that they’re relatable in our terms because a lot of times when you go to the temple and they’re reciting the sutra, you don’t know what they’re saying. And [the decor inside] is so traditional, you know? I mean it’s nice, but it’s sometimes unrelatable; it doesn’t feel like it’s something in your life. So this is where I try to interpret Buddhism in the modern world so that maybe even somebody in their teens can say, ‘Oh, that’s kind of cool’ or ‘Oh, maybe there’s something interesting in that.’”

Which mediums do you use the most for your artwork?
“I use mostly acrylic paint on canvas, on wood—you know, different things. But I’m a big crocheter too, so I use a lot of yarn in my crochet projects.”

What kind of things do you like to crochet?
“I crochet those little dolls.... Have you ever been to the Japanese American National Museum? They had a kokeshi show. Kokeshi are the small wooden dolls from Japan that craftsmen carve out of wood. [The museum was] doing a modern take and they were seeking artists. So I submitted giant crocheted versions of the kokeshi, and they were about three and half feet tall and multicultural. One would have blond hair and fair skin, and then there would be an Asian with dark hair and fair skin—just five different skin tones and hair types just to show [not only] the differences but also the commonalities. They’re all shaped the same—we’re all the same—but they’re all [different in other ways].”

"The eye is just the window to see that treasure in each and every one of us." 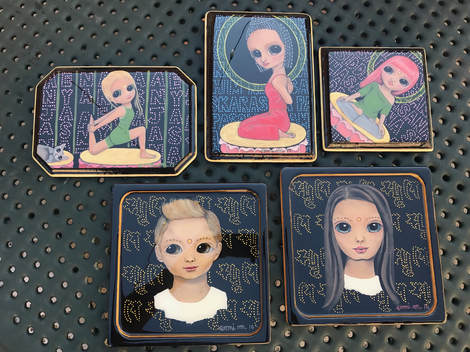 Emi's painted series depicting universality
I noticed that a lot of the pieces that you have depict people with these really large, dark, intense eyes. Is there a reason behind that?
“Yeah, because I believe that [there is] a beautiful potential inside each soul. The eye is just the window to see that treasure in each and every one of us.”

That’s a very good concept! You brought a lot of your paintings today. Are all of these ones a series [referring to a set of small glazed paintings]?
​“That one was a series where I tried to make them look intermixed so that you can’t really tell which nationality they are because of the idea of being universal and just being human rather than being divided by race. So this one was more about seeing the beauty of how everybody is mixed. Even if we’re Asian, we have a lot of mixture in ourselves too. In any country, everybody is really mixed. They say that the original mother was African—just enhancing the beauty of that rather than pointing out the differences. I like that idea of universality.”

How long did it take you to make these ones? What is the material by the way?
“It’s acrylic paint and then it’s an air-drying, pour-on glaze. This took three hours to paint, and then to pour on [the glaze] and wait—you have to wait until it dries. I can finish one of these in two days.” 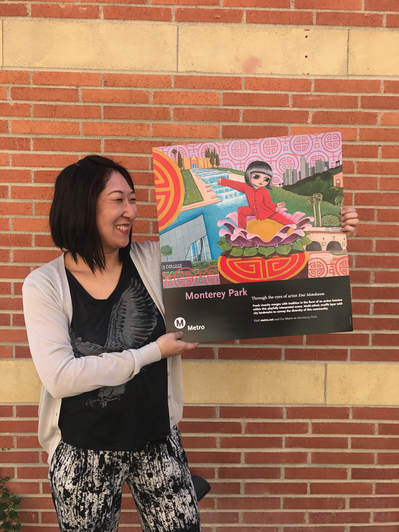 Emi's Monterey Park Metro poster
What’s this one [referring to a painting of a figure with many hands]?
​“If you’re familiar with Buddhist statues and Buddhist goddesses, in English they [call it] “the Regarder of the Cries of the World,” and then in Chinese it’s called Guanyin—it’s the Bodhisattva with lots of hands. She represents compassion in that with all these hands, everybody is so different and their needs are so different. [The idea is that it's] an all-these-hands-can-help-each-one-of-you kind of thing, so then I just modernized her. [Laughing] She’s in hip-hop style. Maybe her hand signs are a little silly, but it’s basically taking an old, ancient concept and modernizing it and making it more relatable.”

Back in 2016, you created a poster for the LA Metro. It was part of their Through The Eyes of the Artist Program. Could you talk about the program?
“It was Metro’s poster program, and what they did was service a lot of cities throughout the Los Angeles County. They chose artists that reside in cities—for example, in my case, Monterey Park. So they had chosen two or three artists to come up with an image of that city, and then out of those three artists, they chose which one was going to represent Monterey Park. So they had chosen mine... luckily [laughing]. There were two sizes [for my poster]. This one went inside the trains because that was how big the casing for it was. And then there was a more rectangular, full-scale one for the buses.”

"I always say my goal is to tickle your soul." 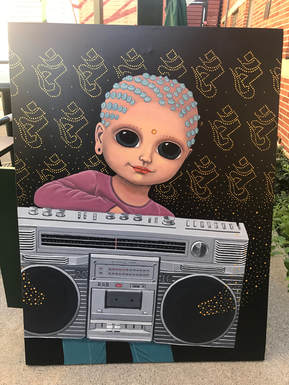 One of Emi's acrylic paintings
What would you say is the most rewarding part of your career as an artist?
“The most rewarding is when people appreciate your art and they get what you’re trying to do. Or even if they don’t get what I’m trying to do, just them thinking it’s pretty or [my work] making them happy [is rewarding] ’cause I always say my goal is to tickle your soul. If it makes you giggle or laugh or smile, that’s great. That’s my reward. That’s my drive. Of course I create these things for myself, but then at the same time as an artist I create it for everybody too to share. That’s important as an artist because if you just keep it to yourself, it’s pointless. So the more people who get to look at it and experience it, [the more] rewarding [it is].”

Do you have any advice for minority artists for how to be successful?
“You have to believe in what you can share with the world and just keep trucking.”

How would you describe your taste in art? Is there a particular aesthetic that you just find yourself constantly gravitating towards?
“I like figurative art and modern artists. Keith Haring has been a big influence on me, or—shoot, what’s his name... he’s my favorite [laughing]—Mark Ryden! He’s current, he’s still living, and he does these really cute figures like this but better—way better. I like a lot of the old Christian art too. And I gravitate towards bright colors, so I like Miro. I wish I could be better with color—I really don’t understand color theory [laughing].”

Is there a project that you are currently working on right now?
“I want to put an illustrated book together. That’s a project in the future. A coffee table book, almost—but it’s still in the working with a Buddhist context—with a simple, probably black-ink illustration [style].” 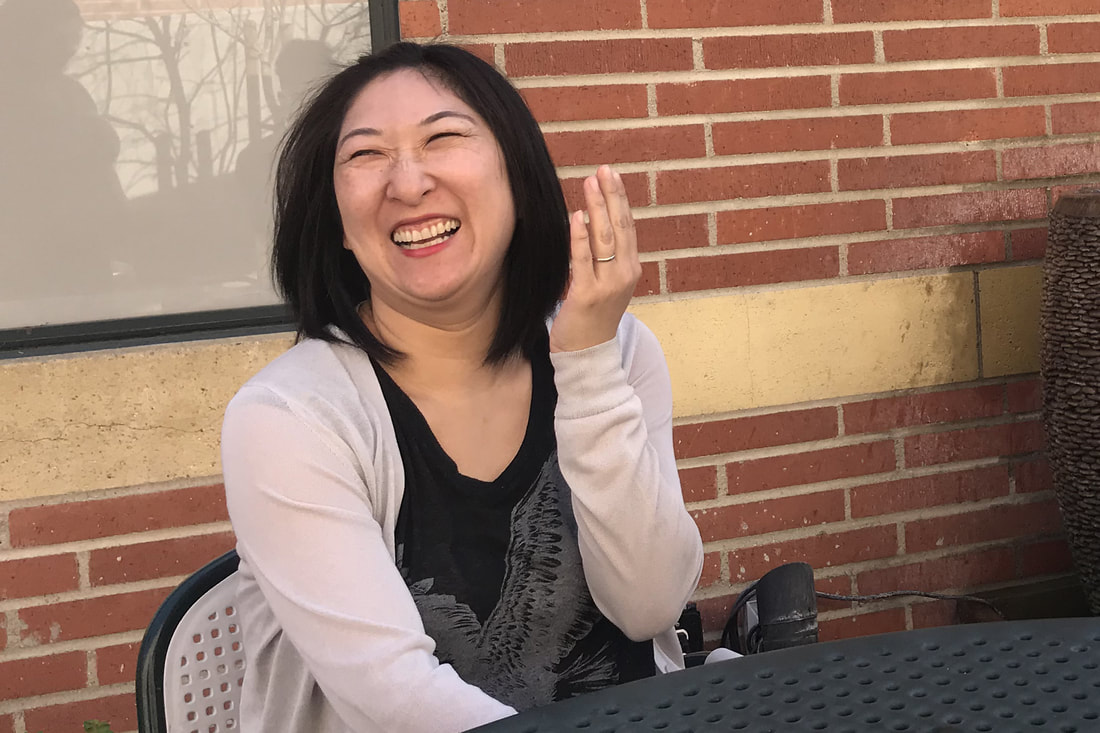 "You have to believe in what you can share with the world and just keep trucking."

Emi’s passion for the concept of universality and the modernization of traditional Eastern art into relatable ideas clearly illustrates her strong belief that regardless of how different people or things might seem, everyone and everything can relate to one another. She has certainly shown through her thought-provoking artwork that if we stop to admire the world around us, embrace our commonalities, and find ways to help share our joys and pleasures with others, just about anything can “tickle our souls.”

Check out Emi's work at www.emimotokawa.com.