Everyday Life:
Then and Now,
​Now, and Then

Written and photographed by Christian Lopez 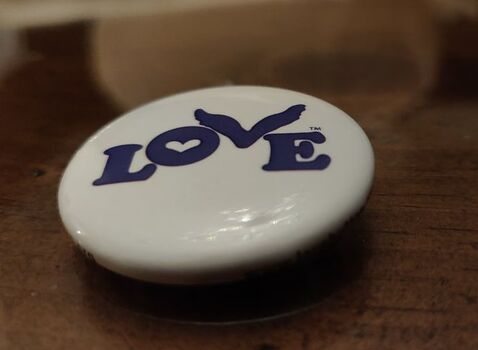 A Love button handed out before the show
The smoky air that drifted in the Hollywood Palladium was palpable and enigmatic all the same. Coldplay was set to go on at any moment, but nobody exactly knew what to expect – the band announced that they would only play a handful of shows for the public to promote the release of their experimental album, Everyday Life, and would return to hibernation immediately after. Upon walking into the venue after waiting two hours in the crispy night breeze blowing down Sunset Boulevard, we were given Love buttons at the door by a couple of greeters.

​These buttons represent the Love organization, which promotes the idea of spreading kindness in our daily lives, all in the name of love.
Pinning those onto our coats, we made our way into the show floor and were met with a rather peculiar stage; stroked with a nostalgic hue of gold, the stage was lit up with warm lights dangling from the ceiling accompanied with cutouts of suns and moons as they drifted delicately back and forth from the rush of crew speeding beneath. There was something about this moment, waiting in anticipation with ten thousand other strangers, who came together for a single purpose. The stillness of that moment struck a chord with me and rang true in a rather peculiar way – even two months later.

The car ride back home from Target was clouded with an unrelenting dour air – my brother and I sat in the car, silent still, as he drove us through the rainy, moonlit streets of Bakersfield. What became the face of all social media platforms, and the several texts our parents sent us just minutes ago would, somehow, soon become a new standard of normalcy: the governor of California ordered all 40 million residents to stay at home to prevent the spread of coronavirus.

The stage, moments before the band went on
Dispelling some of the gloom, Coldplay’s “Lovers In Japan” came on shuffle and my mind went back to earlier this year, specifically on January 20th; in a sea of ten thousand people, my brother and I were listening to this very song, backed with a string section, with life happening all around us at the Palladium. The palpable energy around us was a kaleidoscopic blossom of passion, positivity, and togetherness. Everybody had opened themselves to the band’s music, collectively becoming a conduit teeming with life through and through. The setlist, with an emphasis on songs from their latest experimental album Everyday Life, was simply remarkable; opening with a hauntingly beautiful live string piece titled “Sunrise,” the night would go on to have a church choir in “BrokEn,” a horn section by Femi Kuti and his band in the fiery “Arabesque,” and shine a light on some gems of deep cuts such as “Sparks” and “Amsterdam.” How incredible, intimate, and infinite that night felt, yet now, in the face of a pandemic, I just sat there in the car gazing at all the shuttered local shops pass by, melting into the dark behind us. A night of community, catharsis, and a sold-out venue bursting at the seams with kindred enthusiasm would be exchanged for quiet, somber nights wondering how and when things would get better. How something inconceivable, affecting all of us everywhere, could happen within a span of less than two months – and there I was in the Palladium, cherishing the beat and color of every song, looking forward to what other gifts the year would bring.
Here I am now, staying in at home all day with the unspoken looming over my mind like an unwanted ghost. A sense of the macabre perpetuated every time I strolled past the living room’s tv; tuned to CNN, there was a counter keeping track of confirmed infections and deaths as anchors discussed the urgency of the matter and the uncertainty of the future. A quick glance through social media revealed that the world was attuned entirely on the pandemic as well. All of it was surreal to wake up to, with the matter growing only increasingly dour each morning. Words of encouragement from my professors echoed across my email throughout the day as my friends abroad and in the state messaged me reciprocating what I had been feeling all week. I needed a moment away from all the trouble, so I went back through the camera roll on my phone in search of better days and eventually came across more photos from the concert – and so, I went back there.
​ 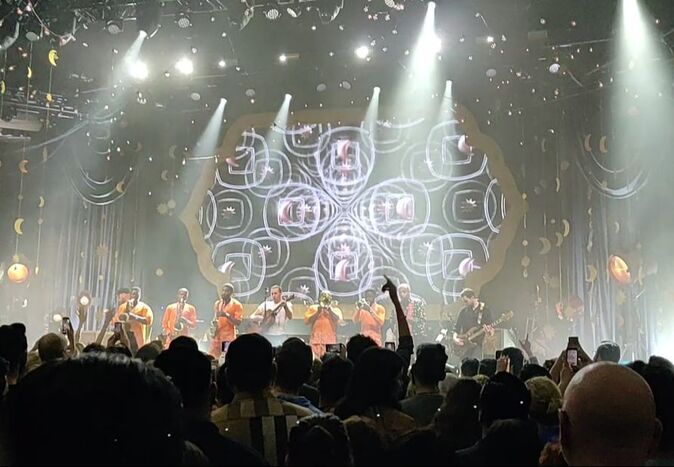 Coldplay performing "Arabesque" along with Femi Kuti and his band
The crowd at the Palladium were undeniably massive fans of Coldplay, as many in the front had fashioned replica outfits that the band wore in promotional material for the Everyday Life, while swaying couples around me later on in the evening crooned every word to twenty-year-old, honey-soaked “Sparks.” Compared to their previous stadium tours, which beamed with exuberant showmanship through confetti, fireworks, and stadium chants, Coldplay’s performance tonight was downsized in correspondence to Everyday Life; the album is a peculiar deviation away from past records, being a personal statement from the band in terms of how they feel about the way things are in the world. A more personal album invited a more personal show, and how: I was able to see the whites in the group’s eyes, the precision with which they strummed on their guitars, and the esoteric gestures they made to each other the way only close friends would. Lead singer Chris Martin, totally comfortable with the audience, even jokingly asked people not to post his attempt at remembering the lyrics to “Amsterdam” on YouTube after drummer Will Champion mouthed him the lyrics across the stage. It was as if the band called upon the Palladium as the hangout spot for many friends, cozily blanketed with the cadence of optimism and love.
Waking up now, news outlets and social media are homed in on the pandemic, with many on the latter offering some levity through their own ingenuity. As the days pass and we delve further into this unprecedented period, people, despite being isolated, are still with everybody – the good graces of technology have connected us together, with the warmth of others triumphing over the bitterness passing through others. Lovely words of encouragement and support shower posts and caring for others has been extended far greater than it has been made known. This kindness is creating a reign of love – the same ideal Coldplay performed about at the Palladium. Being so close to the band that night in January as they performed that gorgeous, lavender-kissed rendition of “Lovers In Japan,” the lyrics and soundscape have resonated greatly in recent weeks. Not only does the sound of lifting each other up sound so incredibly serene and ethereal, we should all have no doubt that one day the sun will indeed come out.