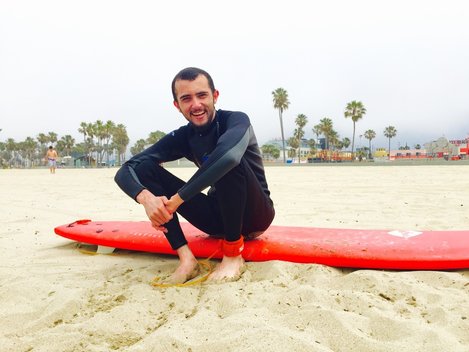 Mansour’s First Time Surfing:
​
“Who wants to go surfing for the first time for an article?”
​When I heard this, I immediately jumped at the opportunity.

Without hesitation, I was putting myself in the front line to experience surfing for the first time ever. The information I had about surfing was very limited. I never knew someone who liked to surf regularly. When my fellow 7500 staff members August and Aziz asked me to join them surfing in Venice Beach, I said I would go and try it out.

At first I was very excited, but had some doubts in my head. Prior to going I didn’t search for ways to start surfing. I just dove in head first. Looking back, I think I would have changed my mind if I had known about the complexity of the sport. "Since I love swimming, how hard could this be?​" I thought.

After a fast tutorial at the beach, we ran to the sea to catch the waves. I was trying to keep balanced while flowing with the waves but it was much harder than it seemed. After every try, it just kept getting harder and harder, as water would flow into my nostrils. Finally, after a couple of bumps from the board, I developed a bad migraine. After continuously trying for almost two hours, I decided to end it. After my first try, I don't know if I will try it again. 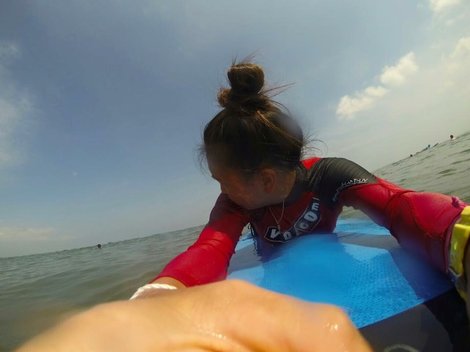 Advice from August:
​
Don’t worry, Mansour. My first time surfing was rough too, but it gets better. It was a beautiful afternoon on Jimbaran beach, Bali, Indonesia. It was hot but not too steamy, the sun touched my skin along with the cool summer ocean breezes. I thought I would be more worried as I am going to surf for the first time in my life, but the weather was too perfect that I forgot my nerves. There were many booths on the beach that rent out surfboards and give surfing lessons to tourists. While my friend and I were wondering which one we should go for, a local saw us from distance and walked towards us, waving his hands. He said he had some nice surfboards for beginners so we followed him to his booth. He looked like Maui from the Disney movie Moana with tattoos on his arms, except, he was holding a can of beer in his hand. His name was Jack. He showed us some moves that we should know, he gave us a demo of how to paddle and duck the waves. He also told us how to put the foot strap on and how to correctly stand up on the board, but all I heard was my heartbeat.

​The next thing I knew I was in the water with my board, I was paddling with my arms, trying to go beyond the break line so I wouldn't get hit by the waves. I was not hoping I would drop in a wave or go through a barrel, I just wanted to catch one wave, ONE. I could barely balance myself on the board but I managed to paddled to where Jack told me to and started waiting for the waves to come. When I thought I could take a little break lying on the board, Jack yelled “Paddle! Paddle!” at me. I turned my head and saw a wave forming behind me. I swung my arms as hard as I can but I could feel the water pulling me back. When Jack was still yelling “Paddle!” the wave built right above my head. It hit me and the tide pushed me to the bottom. My face hit the ground and I got a mouthful of sand. But, the foot strap was still tied on my ankle so I did not lose my board.

​The board was dragging me up but the wave kept pushing me down. I was choking on the water and the sand. I almost lost my breath, another strong current came down and broke the string of the foot strap, sending my board away from me. I finally pulled myself up from the tide and stuck my head out of the water. 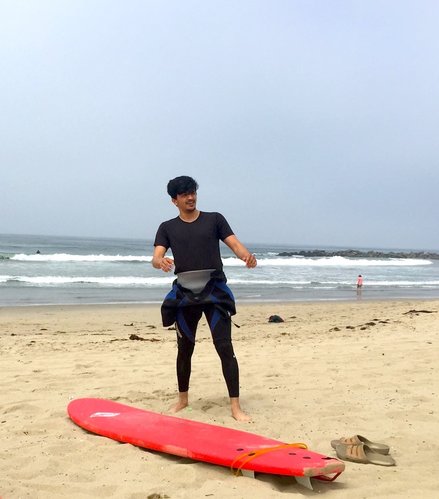 Like August said, we all have to start somewhere. The first time I surfed was in 2013 with my brother Khalid and his roommate Hugo in Newport Beach. The water was cold and the weather was foggy. I started with learning how to do it before getting into the water from Hugo. He told me something important: “If you see a wave that is bigger than you, you should never think of standing up because the wave will hit you back. You should just go under the water.”

​I started to surf with my board for the first time and couldn’t stop thinking how cold the sea water was. I couldn’t stand up on the board just yet, but afterwards it wasn’t a problem for me because I knew it wasn’t that easy to do and requires some balance. I got to know that I should paddle as fast as the wave to stand up, and doing this, I stood for the first time. It was the best feeling, after trying so hard to stand and finding how to balance myself on the board.

Although I stood up, I had forgotten what Hugo said. The incoming wave was way bigger than me and it hit me, flipping me over, and smacking me against a huge rock. I still have the scar on my leg! I swam to the beach to check out the wound, but I found out it was not that big, so I decided to keep going.  Even though I was bleeding, I couldn't get enough of the feeling of the cold water and the waves. Also, seeing my brother and roommate pushed me to keep going because I wanted to do it the same way as they did.

Most people think surfing is easy but it’s not, you just have to keep trying. No one can do it the first time. I find it relaxing when I am in the water. I think about my studies at school and even life.  I think about my own space, what is around me, and what I can do. Some even people speak to the ocean to tell it their problems.  The sound of the waves calms me down. This is why I keep surfing. 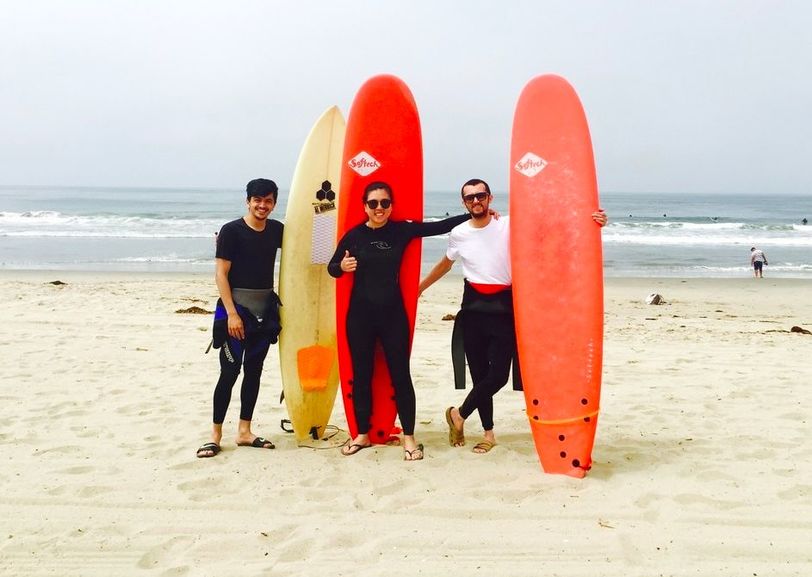 1.    Don’t learn by yourself.
No matter how easy it looks, you need a teacher to tell you the do's and don’ts. It’s for your own safety!

3.    Don’t go for the waves you can’t handle.
Some waves are deadly and even professionals could get hurt. Do not underestimate the danger of nature.

4.    Get a suitable board.
Start with a large soft beginner board. Bigger boards are easier to balance on.

5.    Fuel up and warm up.
Surfing may use up more energy than you think. Prepared to be physically active and warm yourself up before going into the water.
​
6.   Don’t give up!
​Everyone has a hard first time. Don’t let the waves scare you off surfing forever. After all, practice make perfect!