Written and Photgraphed by Addi Staubus 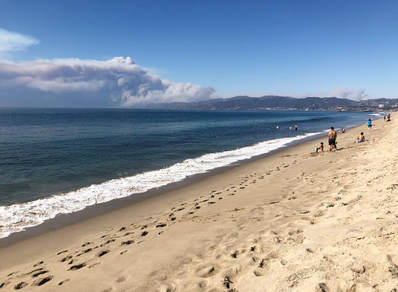 If you have ever watched Animal Planet, you know that the ocean is a terrifying, never ending void. The ocean floor is littered with creatures that are so heinous, their existence should be illegal. Their names do not do them justice as to how terrifying they actually are— and the names are NOT good. Creatures such as the giant spider crab, giant tube worm, vampire squid and pacific viperfish exist, and will potentially rip you to shreds under water and eat you alive. Any creature that begins with “giant” is already going to be a no from me. I do not even want to begin to unpack what a giant spider crab looks like, but rest assured it is what nightmares are made of.

​My relationship with the ocean has never been good due to my mother letting me obsessively read Reader’s Digest at a young age, which is packed full of a variety of ocean related horror stories. Side note— never trust a wild dolphin. They want to kill you. If you enjoy common, everyday pleasures being ruined for you, I recommend picking up a copy at your local Barnes and Noble today. (Does Reader’s Digest exist anymore? I’m not sure. I suddenly have the urge to read it again— old habits die hard.) I have had a poor relationship with the ocean ever since I was a small child. I was on a family vacation in Hawaii, where the ocean is a bit choppier, and was knocked over by a wave that pulled me deeper into the ocean, knocking the air out of me and tossing me like pizza dough. I was traumatized by what felt like a near death experience in my childish mind. That day I learned the strength of the ocean, and how powerless I am to it.
To me, surfing is the epitome of cool. I have always wanted to be the “cool girl” on a surfboard, wowing judges with my tricks while wearing my sponsored surf gear at a competition aired on MTV. If you knew me, you would know that I am in fact, uncool. I am certainly nowhere close to being on MTV, unless it is for the “I Wanna Be Made” series where they teach you how to be cool. Cringe stuff, I know. I knew at the beginning of this challenge that if I was ever going to come close to achieving ultimate “cool girl,” I needed to book a surf lesson.

​After a quick Google search for surf lessons in Santa Monica and a conversation over the phone with a stereotypical sounding surfer dude, I had a private lesson booked for the next morning. I woke up two hours before my alarm went off and laid in bed, contemplating backing out. It was chilly outside, the sun was not out, and I wanted to pull the covers over my head and never leave. I threw my hair up in a bun, put on a swimsuit under my hoodie and left before talking myself out of it completely. 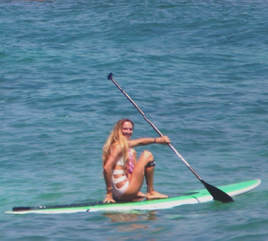 I arrive to the Santa Monica Surf School where I am welcomed by a surfer named Nick. He gives me the whole spiel about their mantra and battle cry, “ride on.” Nick tells me it is all about persistence, which makes me immediately realize I have signed up for something I am going to be very bad at. I am then given the world’s most unflattering wetsuit to wear, and we head out to the ocean.

As I carry my rented board to the shore, I am mentally accepting the loss of a limb. The thought of my feet dangling over the side of the board makes me sick to my stomach. Nick walks me through how we will begin with a few drills, but my brain is not processing what he is saying.

I obsessively scan the ocean for sharks and giant spider crabs. Nothing is there, but I assume they are just below the surface waiting to feast on my wetsuit wrapped flesh.  At this point, I break down and tell Nick I do not want to follow through, and that we can lie to the 7500 staff and say I did this. He responds by reciting inspiring mantras and surfer wisdom, which reminded me a lot of the turtle from Finding Nemo. It worked, mainly because I was embarrassed, and we begin.

I am not going to lie. I did not successfully ride a wave, or stand up on the board. The lesson itself lasted about 40 minutes before I reached my breaking point. I am not any closer to my secret dream of being a surfer girl, but it was never really about that. I did this to face my fear of the ocean and the giant creatures that live in it. Did this early morning, freezing cold, frustrating surf lesson cure me? No. However, I think there is something to be said by following through with a challenge I could have easily pretended to do (I swear I did it, okay?). I was shaking in fear the entire time, but I know deep down that progress was made. There were times during the lesson I was able to let go and truly enjoy myself, and that means something. I will not be returning to the ocean anytime soon, but I grew from this experience, and I am grateful. My takeaway from the experience was that when it comes to facing your fears, you just have to “ride on.”