Food Stands of LA: A Review 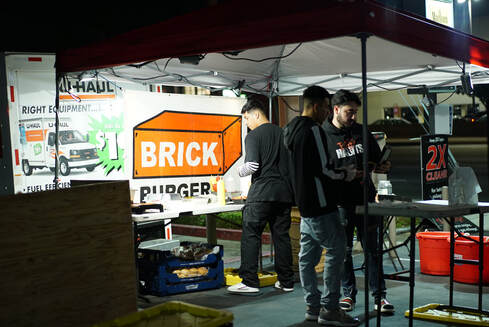 Brick Burger Food Stand
​Driving home from work on a Friday night is a meditative experience. Prepared for the weekend with fresh money in your account, you think about all the different ways you could spend your hard earned money on this new weekend,  But something interrupts that thought abruptly, as you’re stopped at a red light you look to your right and you spot a group of people making something with a heavenly aroma with an even bigger group of people in line behind it.

​Why are so many people waiting for this “street” food? It’s in the parking lot of a gas station, it can’t be that good. Right? You let your curiosity get the best of you and park in the adjacent lot. Thinking you’re in for a quick snack you get your food back and your taste buds are sent on a trip like one they’ve never known before. This sequence of events wasn’t possible in the past, in 2019 LA passed a law that stated it was now legal to own and sell food from a stand. Those food stands that stood in the shadows could now rise to the light and show people what they got.
At the corner of Nordhoff and Balboa there lies a Mobil Gas station, in the parking lot of that station, from 7-midnight or until they sellout every night of the week there's a food stand known as Brick Burger. I noticed this food stand via the exact situation described above, and it was the best choice I’ve ever made. They only provide one thing on the menu, burgers, but they have refined their burger-making skills to an absolute tee, with their special “brick” sauce that lingers in your mouth even after the burger is over, this place is an absolute delight. Even letting you put hot Cheetos on it to further the options available to you.

​Although being relatively new and not as “classic” as the other food stands it doesn’t matter. Their food is so superbly made it has been burgeoned as the place to go in the lower San Fernando Valley. Their service is good even if the people who run it are young, they keep all of their ingredients in coolers and use gloves when they work, even accepting debit and credit cards. A model food stand accommodated for the modern age with food that begs you to taste it,  I highly recommend anyone and everyone to try their burgers, 10/10.

Brick Burgers with Hot Cheetos
​But hidden deep within the streets of North Hollywood lies another food stand, one that's known to be plastered across all social media outlets, some of which being Facebook, Instagram, and Twitter. With the power of smartphones and computers, scrolling to see what your friends are doing is no longer just the case, nowadays you’re bombarded and presented with advertisements surrounding any of the things you’ve recently searched up. So the chances are, fast foods and food stands like Chips and Chicks have probably come up often.

​Set in the heart of North Hollywood, Chips & Chicks is a food stand that creates a wide variety of chicken based foods with a spicy twist. Not only do you have the option of ordering chicken burgers, chicken sandwiches, and all around anything chicken, you also have the option of making your meal spicier based on numerous levels of heat packages. Firstly, and most deliciously, you can add hot cheetos to just about anything, but it doesn’t end there, the establishment prides themselves on having numerous levels of spicy sauces that adds flavor to any meal you want zested up. They start at mild and reach spicy heights of XXX Flaming Hot, created with the notorious Carolina Reapers and Ghost Peppers. They claim to make the food so spicy, that you must sign a waiver stating that Chips & Chicks is not liable for any bodily harm inflicted due to the consumption of the sauces.

"I went to Chips n' Chicks for the first time last weekend during a visit to L.A. from the Bay Area. It will now be my "go to" spot every time I visit SoCal." - Jillian A.
​ 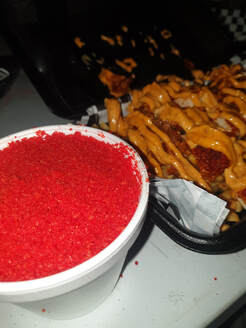 Chicken Tenders and Street Corn from Chips n' Chicks
With logistics out of the way, how was my actual experience at Chips & Chicks? Needless to say, both my partners and I have gone back to the establishment on numerous occasions. The setting is not all that great as it’s a food stand located in what seems to be a shady looking alley in North Hollywood. But appearances aside, the first thing you are greeted by, is a large group of drooling patrons, followed by the aromatic scent of the spicy food. Although the wait wasn’t bad, finding a spot to sit down and eat was quite difficult, as there were nowhere near enough tables and chairs. Onto the food itself; our gang ordered what people would call standard at this establishment. A hot cheeto covered spicy chicken mac and cheese for myself, a ton of spicy chicken fries for Kira, and two fine looking spicy chicken burgers for my partner in crime Spencir. The food looked sloppy, but that wasn’t the greatest issue as it disappeared before my eyes without even realizing it. I scarfed down my sandwich in less than two minutes. The flavors were spot on, the texture was divine, and the portion sizes were simply perfect; not too small, and not overly large.

Beyond taste and presentation, lies cleanliness. Something my family instilled in me as a child was to never eat at a food joint unless I knew the way they cooked and operated was clean. Gloves, clean rags, paper towels, a tighty work space, etc. Chips & Chicks had just that. With an entirely middle eastern crew behind the table, everyone was treating the food as if they worked at a 5 star establishment. Time and care was put into our meal, no one was sweating over the food, and thankfully, it came out cooked to perfection. Overall I have to give Chips & Chicks a solid 8/10. I need to taste more from their menu before I can just come out and give it anything higher, but with that said, this fine food joint stands out as an overall banger. ​ 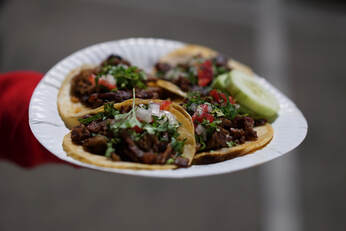 Beef Tacos
​On the opposite end of the Valley, just up the crossroads of San Fernando Mission & Balboa lies an authentic Mexican food stand from the era of old LA. Serving food up at super cheap prices they provide all kinds of tasty menu options like tacos, quesadillas, and horchata as well. Although they have very good pricing, the condition of the stand itself made my partners in taste question the validity. Food stands are not kept up to the condition of health inspector, so it’s up to the customer to decide whether they want to eat there or not, some will see it and think it’s perfectly normal while others might be grossed out. While Brick Burger had all of the food in coolers, used gloves, had hand sanitizer sitting out for the customer, etc, this authentic food stand used no gloves and kept most of the food sitting out in the open. The different drinks they were serving had the lids open 24/7, allowing any type of insect to jump in whenever they liked. The food, however, was very good! The best food they served was definitely the pork quesadilla, their pork hung vertical shawarma style and was seasoned incredibly with delicious tasting (cheddar?) cheese. If you can get past the conditions of the stand itself this is a great choice for a cheap authentic Mexican food in the valley.

​With all that having been said, how does this new age food stand compare to something like the authenticity of an old school Mexican joint like the one above? It’s a tricky comparison for sure, the two are so different, yet share so many similarities. For example, both of the stands are incredibly crowded with the delicious scent of food radiating in every direction for miles. Then you have the food itself. I’ve always been a fan of traditional Mexican food and that place was as traditional as it gets. With delicious food that fills you up for cheap, it's hard to go wrong. Chips & Chicks on the other hand was a bit more expensive but had a wider variety of flavors and more for the pallet, while Brick Burger had cheap delicious food but very limited options. The locations were basically the same as far as elegance goes, besides Brick Burger, which boasted a large stylized poster. But the new age taste and combinations of food were unrivaled, and with a large variety of food putting it above the rest, making Chips & Chicks the best stand of them all.

The Supreme Brick at Brick Burger