In a Galaxy Far Far Away...
By Rebekah Kamemoto

I love Star Wars. One of my first crushes was Ewan McGregor because of Episode I: The Phantom Menace. I sleep with a Star Wars blanket every night. If I could go and live with Yoda on Dagobah, I would! So, when I heard that Disneyland was opening a "Star Wars Land,” I could barely contain myself. Then, Galaxy's Edge opened, and I kept seeing the fun Instagram posts about it. I wanted to go, but didn’t have the time, nor people to go with. Or so I thought - I’m a day older than one of my best friends, and we love joking about being virgos. This year, she invited me to join her and her family in a Disney celebration. Of course, I had to say yes.
To get to Galaxy's Edge, one must walk through what appears to be a cave. The walls are high and vast, and I have to admit I felt smaller than a mouse droid (and I’m 5’7). Then, you see it: Spaceships, giant boulders, robots, the cantina, and even a quaint blue/green milk stand. As cliché as it sounds, my little nerd heart felt at home. ​ 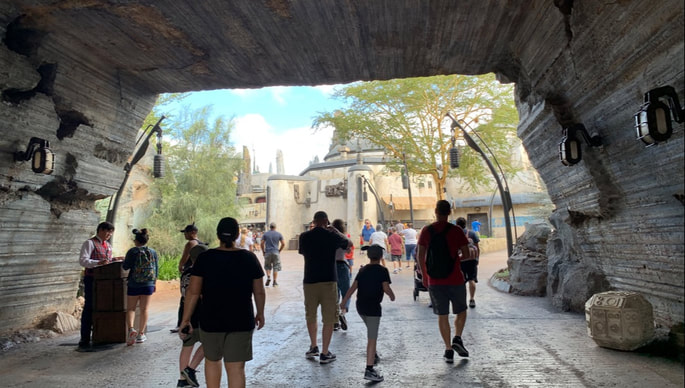 Walking into Galaxy's Edge
Visually, Galaxy’s Edge was absolutely amazing. I truly felt like I was walking around in a seedy off galaxy planet eager to find myself in a cantina and playing a fun game of Dejarik. That is, of course, all due to the handiwork and dedication of the Disney Imagineering team. Imagineers are the designers that bring these fantastical ideas to light. I have been lucky enough to be the padawan (student) of an imagineer. We got to learn about what goes on “behind the scenes” as well as the ability to think like an imagineer. Because of this I was able to appreciate the little things around the park. Because Galaxy's Edge is supposed to look run down, everything had cracks and stains on them, but don’t be fooled, every crack you see, every rusty screw, you notice was a conscious design decision. I loved that everything in Galaxy's Edge looked like a found object that Rey scavenged to sell for food; it just makes everything feel so much more exciting and special.
​
Sadly, we couldn’t go to the Cantina or build a lightsaber, however, we were able to go on Millennium Falcon: Smugglers Run, twice. When you first get in, the ride’s premise is explained by an animatronic of Hondo Ohnaka (I enjoyed this because he was from the Clone Wars TV series). Then, you get to enter the Millennium Falcon, and boy, oh boy, was that a treat. We even got to sit at the famous Dejarik table. After that, you enter the cockpit as you and your crew struggle to smuggle and escape. I don’t want to spoil anything, but I highly recommend the ride. Lastly, I tried the blue milk. It was fruity, and tart, and almost reminded me of a slushie. My friends got the green milk and seemed to have really enjoyed it, so next time I'll be sure to try that one as well.
From a design perspective I was blown away, and from a nerd’s perspective, I was totally giddy about being in the Millennium Falcon. I can honestly say that I had an amazing “hatching day” at Galaxy's Edge, and I can’t wait to go back. 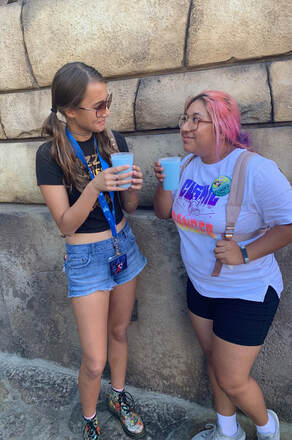