“When I was probably seven or eight, for a period of several months, there was a little boy that would appear in my doorway at night.”  - Dale Fritz 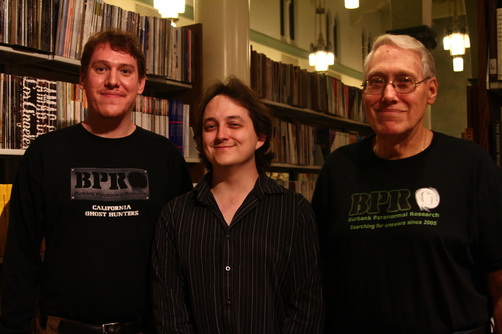 Dale Fritz describes his fascination with the paranormal as he stands with his son, Matt, inside Woodbury Library on a warm October evening. The Fritz's have been invited here by the Library to investigate paranormal activity, rumored to be haunted by the ghost of Mother Cabrini, a dead patron saint, who used to sponsor the school.

Dale, a corporate controller and a Woodbury alum, and his son Matt, a software engineer at CSU Northridge, share a bizarre hobby. This father and son actively investigate paranormal activity all over Los Angeles as a part of Burbank Paranormal Research. The team was founded in 2005 by Matt and fellow investigators Chris Rockriver and Jonine Latar.

“It’s a very, very interesting field,” Matt says of his colleagues’ reaction to his hobby. The most common reaction? "Can I come on an investigation with you?"
​
Dale’s story begins when he was a child and he was visited by a ghost boy who would appear in the doorway of his bedroom. Eventually the boy stopped showing up, but that was just the beginning of Dale’s experience with the supernatural.  Years later, after marrying the woman who would be Matt’s mom, the young couple discovered they were not alone in their Burbank apartment.

“Several years later, when my wife and I got married, our first apartment was haunted,” he explains. “She called me one day and said ‘You need to get home now, I’m getting out of the apartment. There’s a man in here,'  I said, ‘I’m on my way. Call Burbank police-'
She said, ‘They’re not going to come out for this.’ I said, ‘Why not?’  She said, ‘Because it’s only half a man, from the waist up and he’s in the bathroom.’ I said ‘O...kay...’ [laughs]. We stayed for awhile and we went through different experiences in the apartment.”

Their experiences include finding teddy bears arranged in a row against the couch, cans from the kitchen cupboard rearranging themselves onto the floor Poltergeist-style, and Dale tripping over a dog while walking to the bathroom at night, even though they didn’t have a dog. The last straw came during another nighttime trip to the bathroom, when Dale's wife, Julie, saw a ghost butterfly fly down the hall and right through her chest. 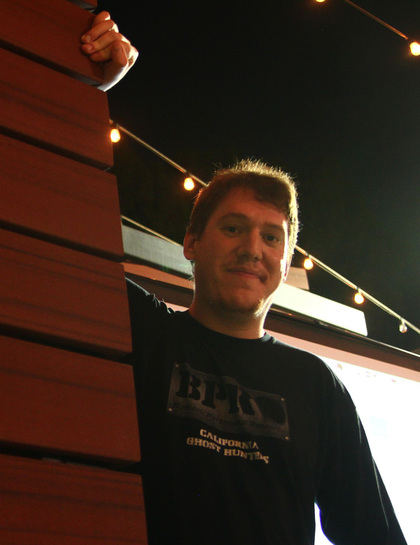 Matt’s formative paranormal experience is a little different than most ghost stories. Riding in the car with his mom when he was about 12-years-old, the two happened to witness a hit-and-run: a luxury car hit a man on a bike, and then kept going. After hanging a U-turn to reach him, they discovered that there was no man, nor any evidence that there had been a crash at all.

​It was that experience that inspired Matt to establish Burbank Paranormal Research, “From that point on, I knew that I wanted to, at least some point when I got older, try to help people find answers to problems they could be having or things they were uncomfortable with, because I never got an answer to mine.”

​The stories are intriguing, and if we all had experiences like that, there would certainly be fewer skeptics. But how do they account for the fact that both men have witnessed such extraordinary events? After the butterfly incident, they ​​​called in Kerry Gaynor from the UCLA School of Psychology to investigate, and he determined that the apartment was haunted, and that Dale's wife was partially responsible.

“They said ‘Oh yeah, this is haunted. There’s no doubt about it.’ They told us…ghosts were attracted to my wife… They said, ‘Yeah, you send out a beacon.'"

Gaynor determined that Julie is a conduit for spirits, hence the family’s frequent encounters with the paranormal. The combination of the haunted apartment and the beacon for the paranormal living there created a perfect storm for the supernatural. Fortunately, since they left the apartment, they haven’t experienced anything quite as serious.

As we walk into the Woodbury Library, Matt informs me:

​"We have thermometers, just in case the temperature drops 10-15 degrees. We’ve had cases where it’s happened, and it’s been interesting."

Woodbury is a small school, so most students are aware of the Library’s reputation for being haunted. Though there don’t seem to be any real stories about ghosts, many can attest to the eerie quiet of the Woodbury Library at night. The common belief is that it is haunted by the ghost of Mother Cabrini, a patron saint who sponsored the school before it became Woodbury. The legends make no mention why the spirit of a patron saint would have unfinished business in this world, or why the spirit of Mother Cabrini, who passed away in 1917 in Chicago, would be haunting a Library in Burbank. Still, the rumors persist, and the the creepiness of the Library at night is hard to deny.

In the spirit of Halloween, the Library has invited Matt and his team, including Chris Rockriver, to present a panel discussion. They begin by showing  an infrared video they shot in a haunted home. Suddenly, a shadow can be seen. It is person-sized and vaguely person shaped, tapering off at the top as is it has a head. But the shadow doesn’t seem to be cast on anything, it’s just hovering in the center of the room. It’s odd, but I’m still not convinced it's a ghost.

Their last video though is harder to dismiss. Matt prefaces the video, saying that it got the attention of Paranormal Investigation teams across the country. Again taken with an infrared camera with no sound, Rockriver can be seen setting up equipment behind a couch, while Matt is at work further back in the kitchen.  After what much have been 30 seconds, about half the students in attendance gasp, and the other half turn and ask what they missed. Matt replays the video, and this time everyone sees it. In the top left of the screen, there is a small flash of light, then in the grainy video, a light shape appearing to be a human face appears in the doorway, then slides out of view. I want to say that it was a glitch, but that doesn’t explain why it appears and disappears so cleanly behind a doorway, rather than out of frame.  This video, in my opinion, was the highlight of the night. I’m not convinced that the video shows a ghost, but there is definitely something strange happening there.

"When you get a man’s face on camera, floating down from the top of the frame, and the place where the camera is pointing is seven and a half feet off the ground, and then you show it to the client and she says ‘That’s my husband,’ we kind of had to say ‘OK, that looks like there’s something going on here.’” 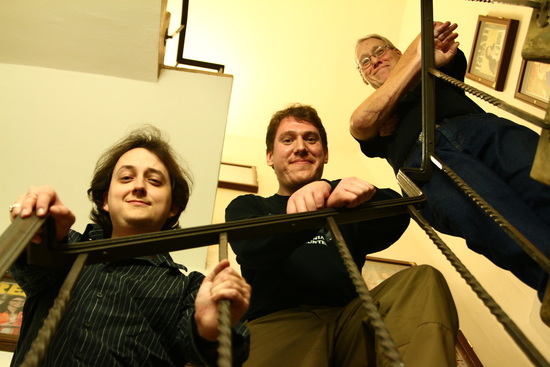 We move inside the library to begin the investigation. Half the group follows Rockriver to the Library Stacks, and the other half follows Matt and Dale to the far end of the library, toward the alter area. The men are equipped with EMF meters (which beep and flash red when they detect magnetic fields), digital thermometers, and a recorder to record the whole event so they can listen for paranormal interference later.

The EMF meter goes off and the men spring into action, but quickly determine that an electric outlet in a desk is the culprit. Matt counts off 10 seconds on his fingers to allow the spirits time to answer on the recording. He then invites us to ask our own questions, to only silence from the meter.

"Stepping a safe distance away, we begin again, asking yes or no questions to any ghosts who were listening."

After a few minutes, however, the EMF meter begin to light up more and more. Dale moves it around: this time it’s not an electric outlet. Dale moves the meter behind Matt, who’s standing in the middle of the former alter. He moves the meter up and down, and stops near the small of Matt’s back. Matt asks, “Is that near my lower back?” as if he can feel something there. The conversation gets more tense, with the beeping following the rhythm of a conversation, going off only between each of Matt’s questions. This continues for a while, Matt asks the spirit to stop touching him, and I begin to worry if this is a good idea.

At one point the old wooden door behind me rattled, and I jumped. I think it was due to pressure differential from the main entrance door at the opposite end of the library being opened, but that could also be the skeptic in me talking. An investigation up in the Library Mezzanine again started with excitement, but after some problem-solving, the team determined that the beeping was too consistent not to be man-made, and we retreated downstairs.

"I formed the team for that expressed purpose of trying to help other people reason out what’s happening, and make them comfortable in their own surroundings, because I still to this day don’t know what happened, and that bothers me."

Having grown out of my childhood belief in ghosts, this whole experience was very interesting. In our interview, there came a moment where I finally had to admit that I don’t believe in ghosts, but the men are quick to assure me that’s okay.

I don’t believe that a ghost kid can appear in my bedroom, or that some people are conduits for spirits, or that ghosts can communicate through magnetic fields, but when Matt and Dale talk about it, I somehow believe it. Most significantly, they make you believe that there is something to be discovered in this field that has inspired so much skepticism. I asked each of the men to put a percentage on how much they do this to help people and how much they do this because they want to know more about the paranormal. Dale says 70-30, learning, and Matt says 90-10, helping. And in that sense, I get it. Matt, and engineer, and Dale’s lifetime of strange experiences that would make any of us a believer, make these two men and their team uniquely qualified and motivated to be the leading Paranormal Investigators in the San Fernando Valley.

A week after the interview, I went into the Library Stacks looking for a book. It was dark by then and the library was mostly empty. I still didn't believe in the paranormal, but the long, creaking hallway to the Stacks was unsettling and quiet. I checked each of the rows to see if there was anyone around. After a scared second, I decided I’d look for that book tomorrow. Maybe Burbank Paranormal has made a believer out of me after all. 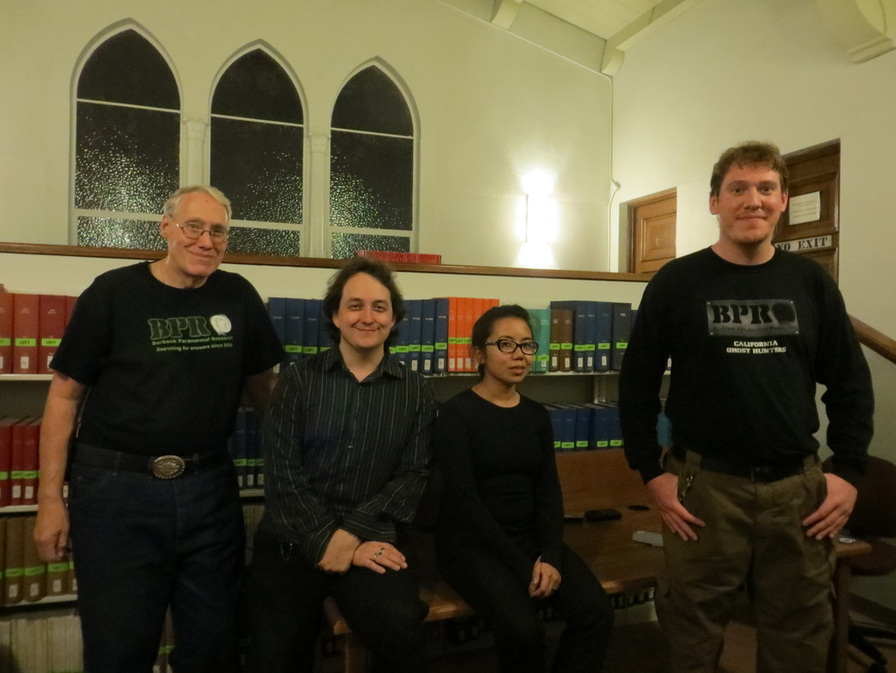