​Written and Photographed by Sarah Elizabeth Clark
I have never been one for so-called healthy desserts. Bring on the ten tons of sugar and the carb overload that will make my belly way too happy, landing me in a comfortable comatose. But, when I’m celebrating my birthday with friends who have gluten allergies, sometimes compromises need to happen.

​Even if one doesn’t have a severe allergy, many people have been increasingly bothered by excessive gluten in their diets. In the past, I’ve tried to cut some gluten out of my diet to feel less sluggish. It is terribly tricky to find replacements for typical gluten desserts, especially ones that aren’t overloaded with sugar or incredibly expensive.
​
So, I should have known that searching for a gluten-free cake that actually had a flour substitute in it would be decidedly more difficult than I had anticipated. I really thought there would be more recipes than when I briefly reduced my gluten intake a few years ago. Isn’t gluten-free baking very popular and widespread? Haven’t they perfected cakes yet? Of course, I only had almond flour on hand, so that did cut out some choices. The limited options may have been my fault, but finally, I found one that wasn’t just chocolate fudge masquerading under the title of cake and decided to go for it. 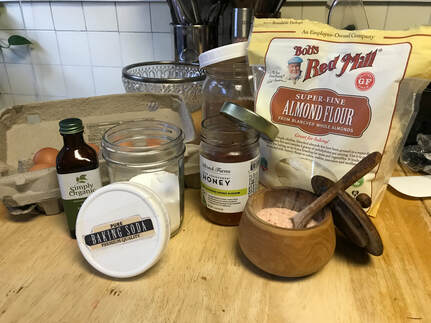 "It was very much one of those moments where you just appreciate the tiny beauties that pop up in life with no questions as to why this small thing is so pure." 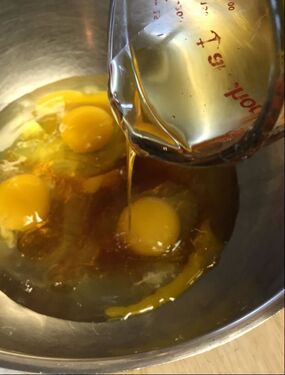 1. First, preheat oven to 325 degrees F and make sure that the rack is in the middle of the oven. Then, line a 9-inch glass pie plate with a circle of parchment paper and grease the pan with unsalted butter.
​
I found it easiest to place the pie dish upside-down and then cut around the bottom part of the dish. I only had to trim about an extra quarter inch off the parchment paper that way and it was pretty easy to make it into a perfect circle.

​2. In a large mixing bowl, whisk together 4 eggs, a ½ cup of honey, and 1 tablespoon of vanilla extract until there is a smooth consistency.

Pouring the honey in was absolutely mesmerizing. That was absolutely the prettiest part of mixing together a bunch of raw ingredients and I thoroughly enjoyed it. It was very much one of those moments where you just appreciate the tiny beauties that pop up in life with no questions as to why this small thing is so pure.
5. Pour the batter into the prepared pan. Bake until center is set, and a toothpick inserted in it comes out clean, 30-35 minutes.
​
I stuck the cake in the oven then looked outside to the most beautiful light rain trickling down as the sun began to set on the horizon. Absolutely gorgeous. I felt like everything was right in the world. For a moment.

"There were tiny crumbs left behind and I was so excited to try it, I pinched a bit together and got ready to taste the yumminess!" 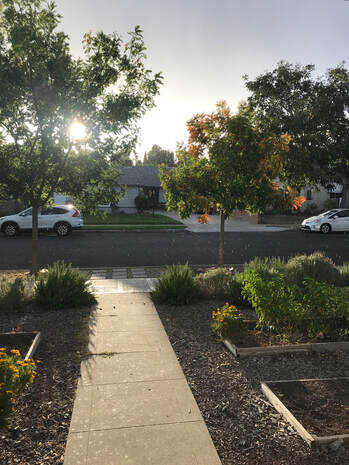 Getting to watch the rain fall against the sun
​​I don’t know what I did wrong, but I had to bake the cake for approximately 45 minutes. I’m wondering now if maybe I need to see if my oven is working properly as I’ve never had to bake a cake for that long that wasn’t abnormally thick.

However, many toothpicks checks later, it technically turned out. I cooled the cake on a cooling rack and then tipped it out of the pan about an hour later. There were tiny crumbs left behind and I was so excited to try it, I pinched a bit together and got ready to taste the yumminess!

And it tasted. . .healthy. Definitely not your typical birthday cake. Absolutely disappointed and regretful that I didn’t go with the flourless cakes that were basically just fudge. It was honestly so underwhelming that I even forgot to take photos of the finished product. I wasn’t satisfied with it, but my mom certainly liked it, so it should be perfect for someone wanting to cut back on gluten or sugar while keeping stuff on the healthier side for a dessert.

​After serving it to my gluten-free friends, I have since then been accused of using them all as guinea pigs and said it was suspicious that it was even my birthday at all! Even so, consensus among my friends was that it tasted good enough for a gluten-free cake, but not something that I would make for myself as it didn’t quite fit my personal taste.
Recipe from: https://healthyrecipesblogs.com/almond-flour-chocolate-cake