Written and Photographed by Peter Martinez and Joshua Jones 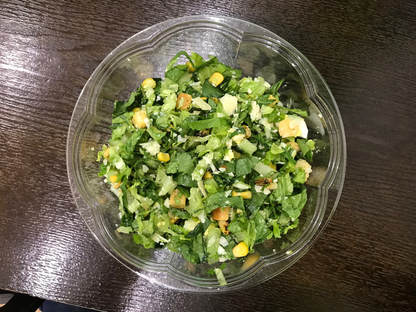 Caesar Salad...YUM!
PETER: Born a carnivore, I grew up in a family where all we eat is meat. I decided to try being a vegetarian for 24 hours and my friend, Joshua Jones, decided to do the challenge with me.  It brings great shame for the true meat eaters out there, but we are taking this challenge in order to prove that we can take on this task and come out alive to tell the world: WE DID IT.

JOSHUA: I’m a big guy and I’m big on flavor. When I eat. I go big or go home. I had to give up meat, one of my true loves, for veggies and fruit which made me feel like I was being unfaithful. Don’t get me wrong when I eat meat, veggies sometimes are the side piece but dating solely veggies is not what this big guy is about. As a part of a 7500 staff challenge, we gave up meat for 24 hours. For whatever illogical reason, I personally went above and beyond and went 48 hours with no meat. I don’t know if I could physically ever do this again. My body started to go through heavy withdrawals and I began to shake, sweat, and itch. I felt like walking up to people holding myself, scratching like an addict with withdrawals, asking them, “Hey man...You got some meat?”

"I felt like walking up to people holding myself, scratching like an addict with withdrawals, asking them, 'Hey man...You got some meat?'"

JOSHUA (7:45 am): I ate eggs and hash browns with watermelon.  Arrived to school and got some oatmeal and fruit.

PETER (9:34 am): Waking up early in the morning, prepping for this dreadful day. On my end, my breakfast began with a veggie shake, made nothing but veggies, and only veggies… just veggies, and it begins.

“​I torture myself as I stare at the staff preparing meat meals for students." 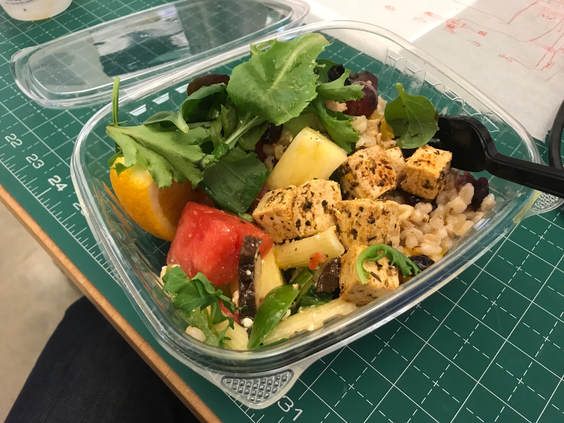 Delightful brunch from Woodys
PETER (11:30am): Upon arriving on campus, my stomach began to rumble louder and louder to a point to where it set car alarms off. I couldn’t take it, so I decided to go to Woodys on campus for some brunch. Today’s special: Roast beef and gravy with mashed potatoes, sweet potatoes and bread, showcased with a bright sign with Thanksgiving themed colors.

​I torture myself as I stare at the staff preparing meat meals for students. Taking a few steps back from the counter where they were serving, I turned quickly to the salad bar behind me and grabbed whatever was green. At the register, I kept looking back, wanting to change my mind in what I was purchasing, but took a deep breath and moved on. I almost forgot to pay for my meal since I lost my train of thought, so I paid for my meal and finally left.

​JOSHUA(11:30 am): I’m so hungry. I’m in so much pain. I need meat… I get a salad and accidentally take the cup of meat that goes with it. I then realize I can’t have meat. I die inside a little.

JOSHUA (2:45pm): I’m hungry again and working around food is not helping.

"I’m so hungry. I’m in so much pain. I need meat… I get a salad and accidentally take the cup of meat that goes with it. I then realize I can’t have meat. I die inside a little." 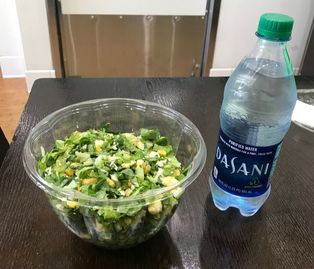 The main course of the evening.
PETER & JOSHUA (3:30pm:) Wishing it was the break of dawn, still in studio, and as Joshua just concluded his last class, we decided to visit a local salad place called Chop Stop. Upon entering this vicinity, it felt very cozy and small, and everything was painted green, from the menu to their employees dress code. I did not understand most of the names that were on the menu other than the word “salad” and “caesar”. So I ordered a basic caesar salad, poured in a small, transparent bowl, ready to be devoured as I am thinking of a nice juicy steak. Throughout the day, I felt weak, in terms of strength and pride, but I was determined to get this done. The food was good, I am not going to lie, I don’t know if there as a special type of sauce or dressing but it turned out well, paired nicely with a bottled water.  The food is great but my stomach tells me, “This needs meat.”

"I personally went to apologize to a bucket of chicken for betraying it."​ 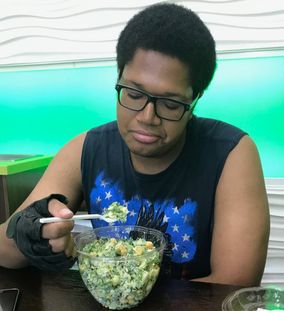 Joshua enjoying his salad.
JOSHUA (8:00pm): I pig out on vegetarian junk food so I don’t eat meat.

It was a tough day. My body craved meat and I struggled to keep my composure.

For dinner, I ordered a Caesar Salad without chicken. The salad was a large portion for the price that was paid and it tasted great, but my body kept telling me this needs something. It needs some chicken.

After the challenge was over, I personally went to apologize to a bucket of chicken for betraying it. I never meant to show my love disrespect. I was just doing what I had to do.

​In the end, I don’t know if I could be a vegetarian but I do know I can rise to an occasion without giving up.
​

"My body kept telling me this needs something. It needs some chicken." 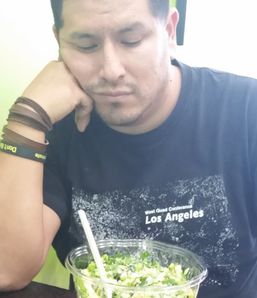 Peter is hoping that this never ends.
PETER (9:30pm): After lunch, I decided to go home, my last meal was another salad, yes…another salad…not as tasty, but it was something. Dinner was crucial, it was taste-less, but I managed to finish it. I don’t usually sleep this early, but needed to due to the suffering I endured all day.

I stay true to eating meat, but I learned that just going “cold-turkey” isn’t as easy as one things, it takes patience and discipline to acquire a “green-only” stomach.

​I praise those who are true vegetarians, but with much respect, I will still eat meat right in front of you.