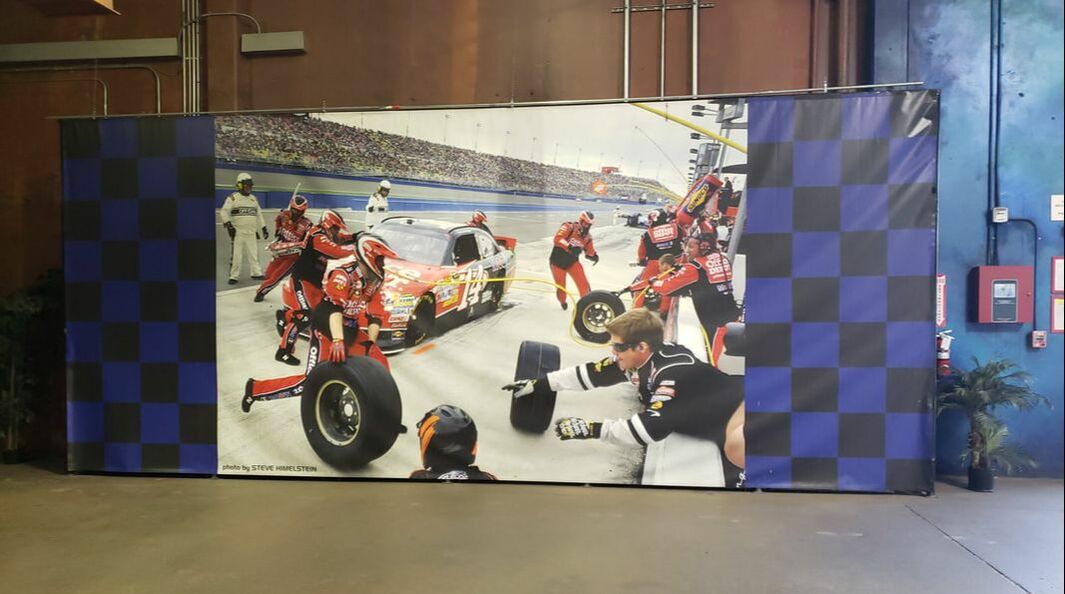 ​After we had finally gotten through our first race, which was 16 laps and really difficult yet exciting, we decided to take a little break because it was too much for us to handle. There was this one turn at the end of each laps and the wheel would tighten up so much to the point where I was about to give up and just stop the car. When I signed up for this, I was thinking it was the easiest thing ever... but nope! The go-karts were pretty cool though. They were so tiny and low to the ground that it didn’t even feel like a car that could go 50 miles per hour but once we started racing, I realized why we all had to be at least 18 years of age. It was insane; the go-karts didn’t drive smooth which is what made it fun but I’m pretty sure I have so many bruises on my back because of how fast and bumpy the cars were.

​It was really worth it to be honest.

​For protection, we had to wear these tight helmets with a ridiculous pink head-wear to cover our hair from getting in the way which made us look funny. The helmets were pretty cool although it was honestly suffocating me every single second that I had to wear it. It made me feel trapped inside and I have no idea how race car drivers always wear them without complaining. If I had to always wear that thing on my head, best believe I will be complaining every second of the day. The second the race was over and  all of us were impatiently waiting to take them off which was pretty fun. It did look pretty cool with them on though, so we decided to take a bunch of selfies. While we were racing, I tried to take videos and pictures but it was so hard to do without the possibility of me dropping my phone, so I didn’t risk it which kind of sucked.

​After our break it was time for the second round of our 16 laps. At first, I wasn't really up for it but what kept me motivated was thinking that right after we were all going to go and eat so that kept my hopes up! 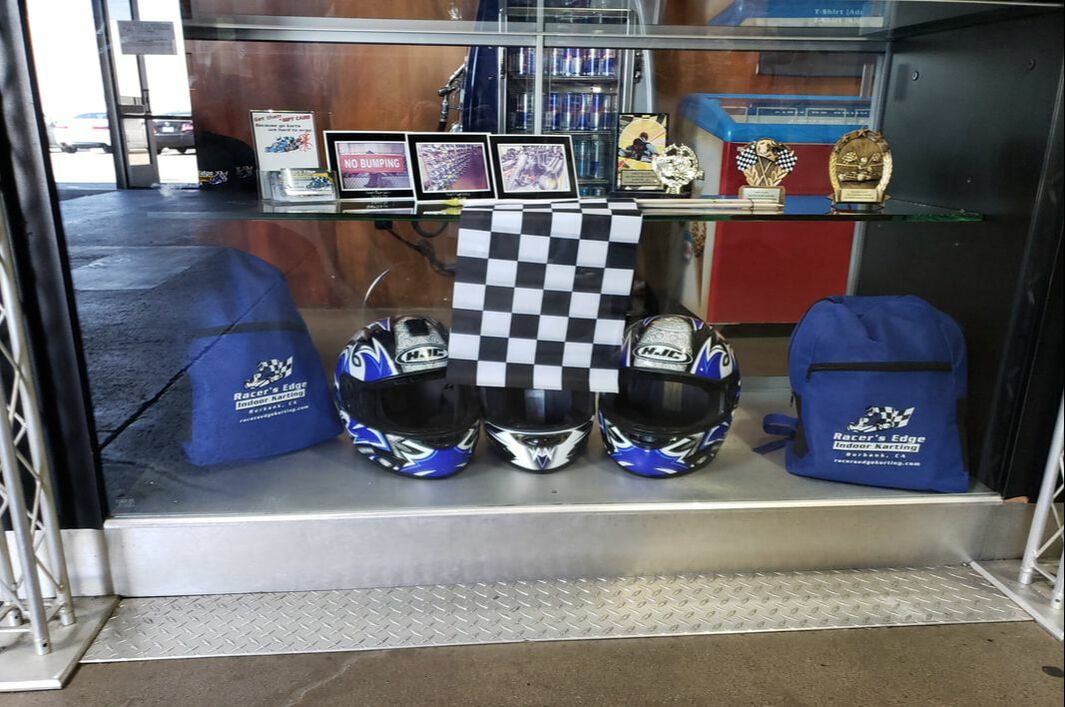 ​“Are you guys ready for your final race?”

​One of the employees asked us - hot, sweaty, tired and sore we all geared up one last time for an epic and shattering final race. As we sat in our assigned go-karts, me being the first kart, we strapped our seat belts on, and waiting for the employee’s nod to begin. While the first race was a little rough and we were following the rules of the signs plastered ever: “Do not bump go-karts.” It didn’t last long because in the second race we turned into professional rebels. A few minutes had gone by and I was smiling and minding my own business driving my kart, and winning the race might I add, when out of nowhere BAM! Andrew rams into my go-kart and makes me lose control and crash into the barricade. I yelled, “Hey!, It says no bumping!” my words did nothing really as Andrew sped off - laughing, followed by Elice and then our friend Stephanie. Sitting there with my over-sized helmet which did not fit, and eyeglasses jumbled up together, I prepared my go-kart and rejoined the others. Who was I kidding… I don’t follow the rules on the regular road I wasn't about to start following it on a race track.

We continued the race with cutting each other off, bumping into each other and aiming not to try and flip the karts over. Sometimes I would look from the corner of my eye and see the two employees looking at us like they should probably say something but decided against it. Continuing the race, an idea popped into my head, I slowed my kart down, took my phone out of my pants pocket and tried to flag Elice, Andrew, and Stephanie down so I can take an action shot of them in the karts. However, they couldn’t comprehend what I was saying, so I put my phone into my hoodie pocket instead of back in my pants pocket, which I regretted instantly.

Part Two: Farzan & Eduardo
We were all pretty excited and anxious to begin the race. The other group of people were being waived down by the course operator to slow down and pull the go karts back into the initial line formation. Now, we were ready to go. The course operator flipped our machines on and one by one we sped off into the course trying to not lose any precious seconds in the race. Farzan was the first one up, followed by another visitor, then myself, another visitor, and finally Maoqiiang. Farzan clearly had no issue keeping the lead and the visitor behind him kept trying to sneak past him at every turn. Eventually, they were beginning to bump one another and Farzan ultimately was able to shake him off his tail and the visitor ended up crashing into the wall. Everyone passed him as he quickly tried to back up his kart and get back in the race. The other visior and myself kept trying to compete for second as Farzan was greatly keeping the lead and was in fact about to overlap Maoqiiang who had yet to come out of last place.

​The visitor I was competing against for second place eventually lost control of her kart and drifted a bit to wide into the curve to the point of hitting the wall and slowing her down, allowing me to pass. However, out of nowhere, the same visitor who had crashed initially passed all of us out of nowhere. He now held his original second place, and Farzan had just overlapped the two people behind me and was about to overtake me. I tried really hard to not have him pass however at one turn he saw his chance after I had turned too wide into the curve and he zoomed past me with a bit of bumping involved. The race was more than halfway over at this point and everyone was determined to pass one another up so the we all got pretty close to each other and began bumping into one another. Maoqiang seemed to be having some trouble going fast so he would literally allow everyone to pass him as they came around the track. He was taking the slow lane for a majority of the race

​He now held his original second place, and Farzan had just overlapped the two people behind me and was about to overtake me. I tried really hard to not have him pass however at one turn he saw his chance after I had turned too wide into the curve and he zoomed past me with a bit of bumping involved. The race was more than halfway over at this point and everyone was determined to pass one another up so the we all got pretty close to each other and began bumping into one another. Maoqiang seemed to be having some trouble going fast so he would literally allow everyone to pass him as they came around the track. He was taking the slow lane for a majority of the race. 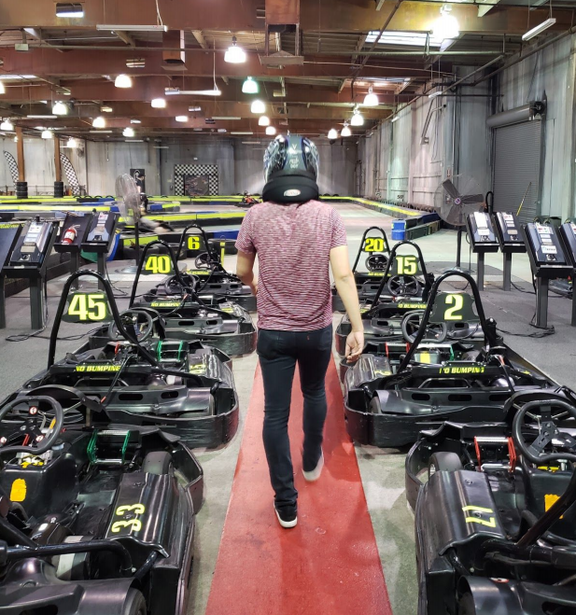 Geared-up and ready to go!
Ultimately, it was the final lap and Farzan and the other visitor seemed to be going neck and neck for the first place and fastest time. Farzan eventually lost him on a corner and pushed through the first lap to make it first place. The visitor followed not to shortly after for second. I came in at third and the other visitor and Maoqiang came in after.

​It was an exhilarating time and by the time it was over our hands and feet were so tensed up from grabbing the steering wheel tightly and flooring the gas pedal. We all came out of there laughing with a bit of adrenaline still pumping through us and that’s when we decided that we would come back again with more people for a rematch. We would definitely recommend this place to anyone looking for a quick rush and having a good time.