Written and Photographed by Amanda Way
I am from here in Los Angeles, a lovely place, usually temperate climate, that rarely ever experiences snow. Eight years ago, we were strangely fortunate to experience a serendipitous flurry of snow in LA for the first time in several years. That was the last time I ever had to encounter snow, and since it was there and then gone the next day, I had the memory of it being fun and cute. Well this snow story isn’t so cute. ​

"It said it would be snowing the two days we planned to be there. Nothing could go wrong there, right?"

For our spring break, my boyfriend and I planned to take a trip to the Grand Canyon. Since we’re broke college students, we opted for the least expensive way to enjoy the national park, which was camping, a whole $36 for 2 nights. We both grew up respectively spending summers camping, so we thought it would be exciting and fun. But we didn’t take into account that the Grand Canyon’s weather is often unpredictable during the winter months, even at the tail end in March. It was about a week before our trip that I started looking at the projected weather for our trip. It said it would be snowing the two days we planned to be there. Nothing could go wrong there, right? Well, we kept our plans, but opted for a plan B just in case it ended up being more difficult than expected, which was to escape to Vegas for the second night. 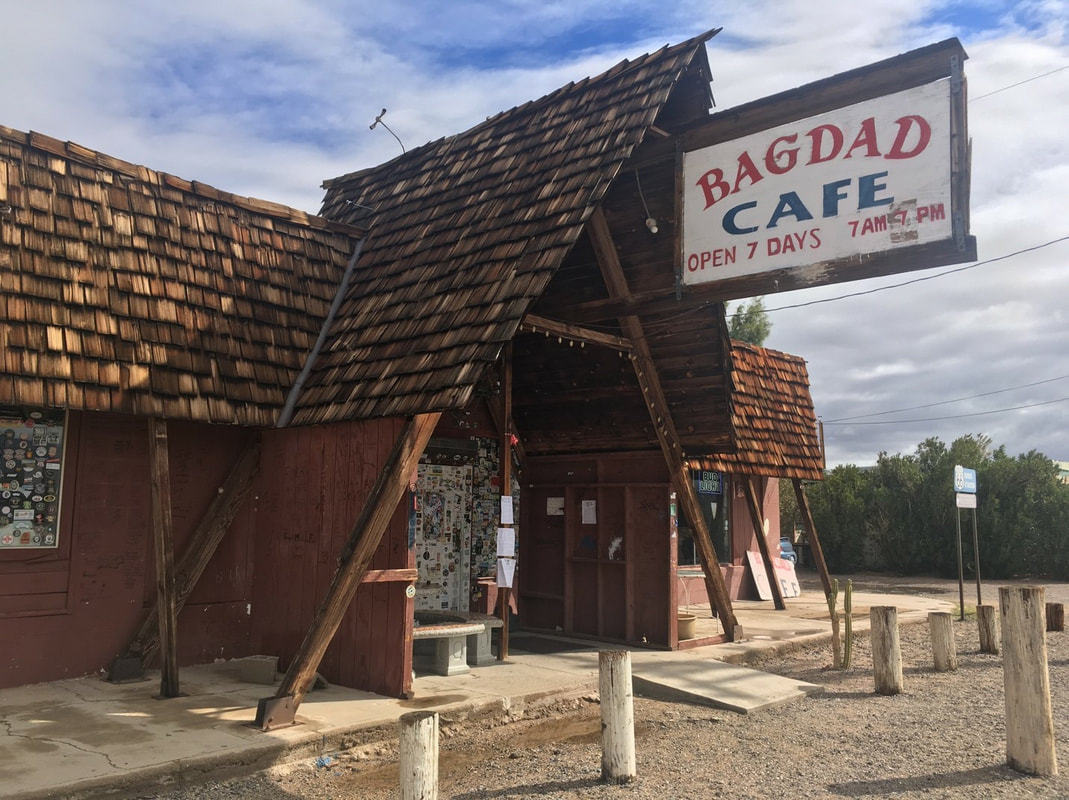 Bagdad Cafe on Route 66
For some reason this trip had constant roadblocks… literally. It started out at 6am, when we woke up to get right on the road. Moments into packing the car I realized we left some vital camping equipment back at my parents, which I thought would set us back about an hour, but once we finally got on the road I knew we’d be getting to the Grand Canyon too late… like, in the dark. I’ve only set up a tent once in the dark and that was neither fun nor easy. The way it was seeming, we sort of expected to sleep in the car anyway. The second roadblock was an actual boulder in the road, that my boyfriend drove over. It seemed like a little rock as we were approaching it, but once it made a big booming contact with my car, we both stopped our conversation and got really quiet. Next thing we heard was a scraping, and the truck behind us started flashing his lights to warn us that the shield under my car was dragging. The timing was just as ironic, as we were 80 miles away from the next town, Needles, CA. From then on we were both anxiously attempting to keep our cool as my boyfriend kept a safe distance behind a 55-MPH truck to shield us and my stupid car undercarriage from the wind. Once we got to Needles, we got the shield fixed and got back on the road, and at that point we just finally decided to take our time, drive on route 66 a bit, and just chill out after the crazy drive we had, since we knew we wouldn’t be seeing the Grand Canyon that night.
We stopped in a few places along the route 66. One of my favorites was the Bagdad Café in Newberry Springs, CA, which was impressively disheveled and grimy. The owners clearly have no shame about the appearance. It attracts a lot of tourists on this sad and desolate route 66 road, mainly due to the popularity of the German movie of the same title that came out in the 80’s. Unlike Newberry Springs, there was a lot more to see in Kingman, AZ. That town was bustling with route 66 paraphernalia that we just had to go through it all. Not only did they have a great restaurant inside of a route 66 themed store, called the Roadrunner, but there were so many beautiful business signs that you could tell have stood there as long as the businesses themselves. Seligman, AZ was also a sight, including Williams, AZ. The gist of it all, though, is most of the stores on the route 66 in Arizona are just fun touristy places to stop and awe at. And the theme is very mid-century oriented.

"We laughed because everyone was leaving the park, but he and I were the only ones on the road going into the park."

Once we finally made it to our destination, it was indeed snowing and had definitely already snowed quite a lot before we arrived. My boyfriend is used to driving in the snow, thankfully, so he took charge of that. The long road from Williams to the Grand Canyon, that was normally 30 minutes or so, was about an hour because of the weather conditions. We laughed because everyone was leaving the park, but he and I were the only ones on the road going into the park. After the day we’d had, it was only fitting of the foreshadowing that had ensued.
Once we got to our campsite we pitched the tent, in the dark, threw all our supplies in the tent, and prepared the car so we could sleep in it for the night. It was 7pm, totally dark and snowing, and there was no way to make a fire. Since we didn’t know the area well at all, we didn’t venture outside of our campsite, and we felt incredibly stuck for the night. It would’ve been possible to maybe go to the market down the road, or even try to walk to the canyon itself, which was about a mile away. But we were nervous about it, and it was too cold. ​
By 10pm, we fell asleep in the car, feeling somewhat accomplished for our day, but also a little disappointed that there wasn’t much to do, and pretty uncomfortable from the weather. Around midnight, my boyfriend woke me up in the stuffy darkness of the car, to ask if there was any way we could just leave. I kind of expected this to happen, but I thought I’d be the one who would want to leave first. We opened the door, letting in a brisk snowy air, and saw the damage. There was no way we could just pack up in the dark and leave, with how much it had snowed over the car, the driveway, the tent even. I had to reassure him while I started to also feel anxious about how trapped we were in that moment, that we had to sleep it out that one night. For the next 20 minutes I was trying so hard to convince myself that it was going to be ok, while beginning to wonder if maybe we would die in the car without the window down because of an over amount of carbon dioxide (is that even a thing?). We tried to comfort ourselves and each other, rolling down all the windows just a bit, and hoping we could just get through the night. ​ 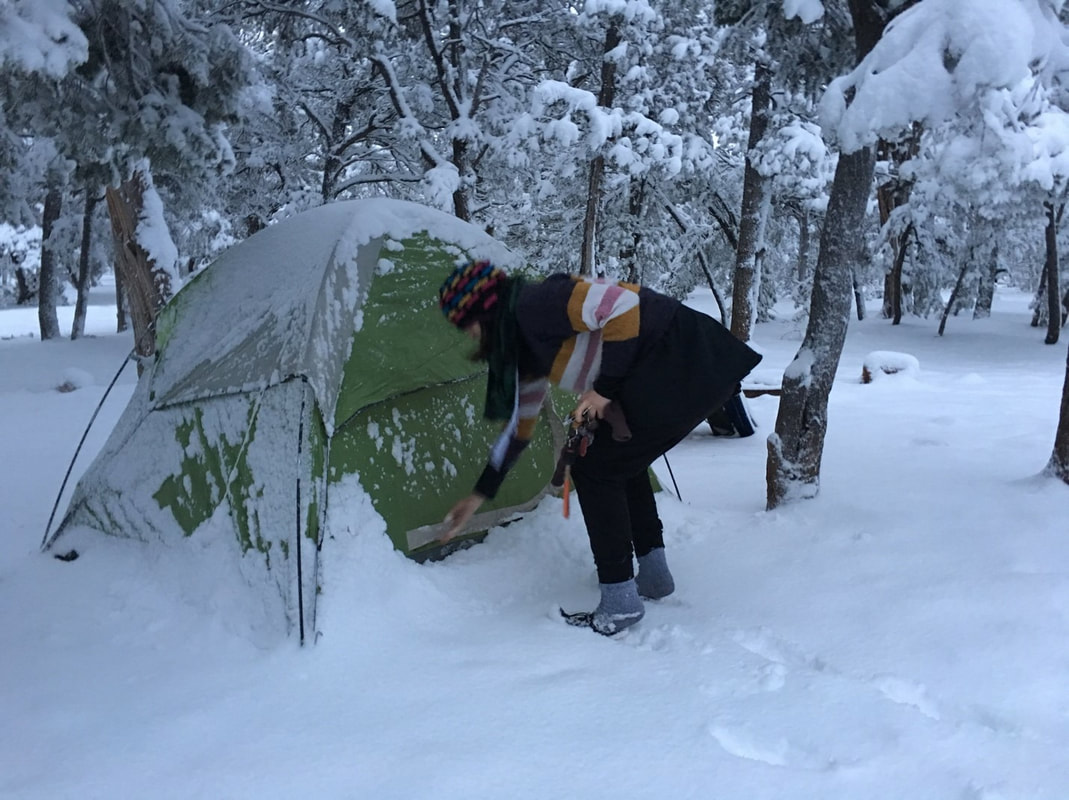 The tent after the 5 inch snowfall
The next thing I knew it was 6am, a good enough time to get up and pack everything, go see the Grand Canyon quickly, and go back to a civilization we were comfortable with. That was the plan, get out as quickly as possible, before it snowed more and we were legitimately trapped. It snowed 5 inches overnight, including the 3 or so inches that were there prior to arriving. We hurriedly packed up the supplies and tent, and I tried to make some breakfast but it was just too inconvenient in the snow and the wind. My gloves were on, then they were off so I could make the food, then back on because my fingers were freezing, etc. That went on all morning. We were frustrated with the tent not being able to fit back inside that teeny tiny bag it came with, that always worked before. Things were getting irritating, even not being able to wash the 3 dishes we used for breakfast because the faucet is closed for the winter. Finally, we shoveled off a path with a plastic crate I had in my car, broke off the ice on the wheel wells with the poles from my tent, and got the hell out of there, driving a mile away towards the Grand Canyon. 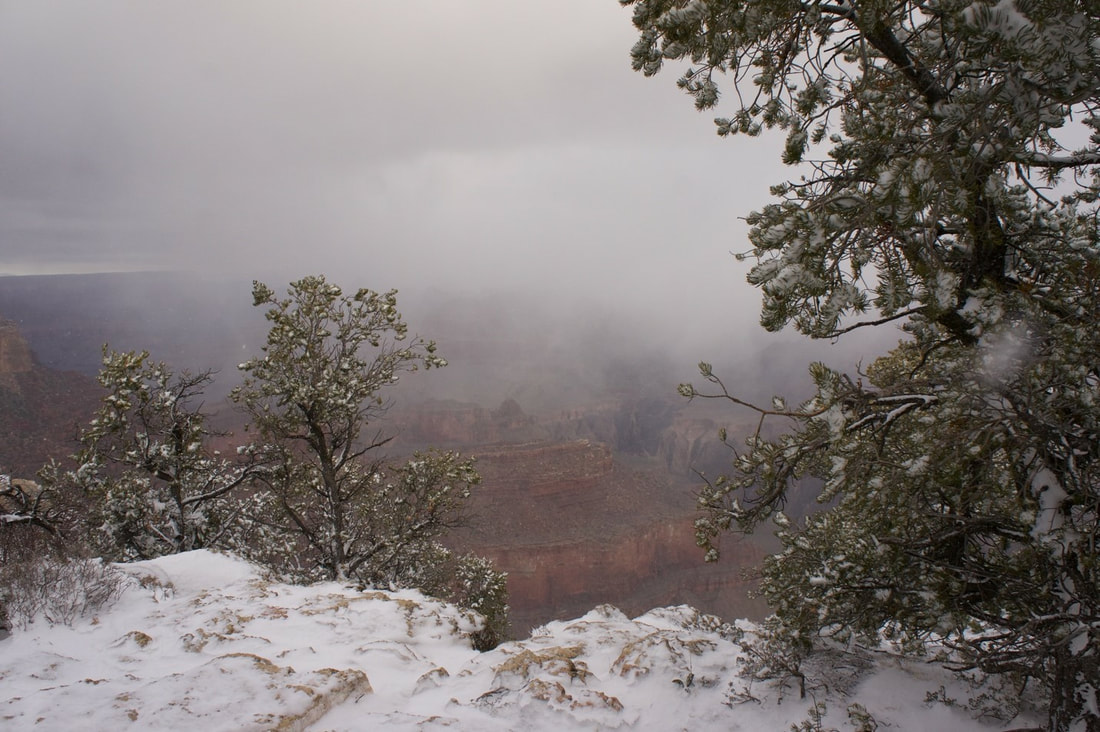 "The next thing I knew it was 6am, a good enough time to get up and pack everything, go see the Grand Canyon quickly, and go back to a civilization we were comfortable with. " 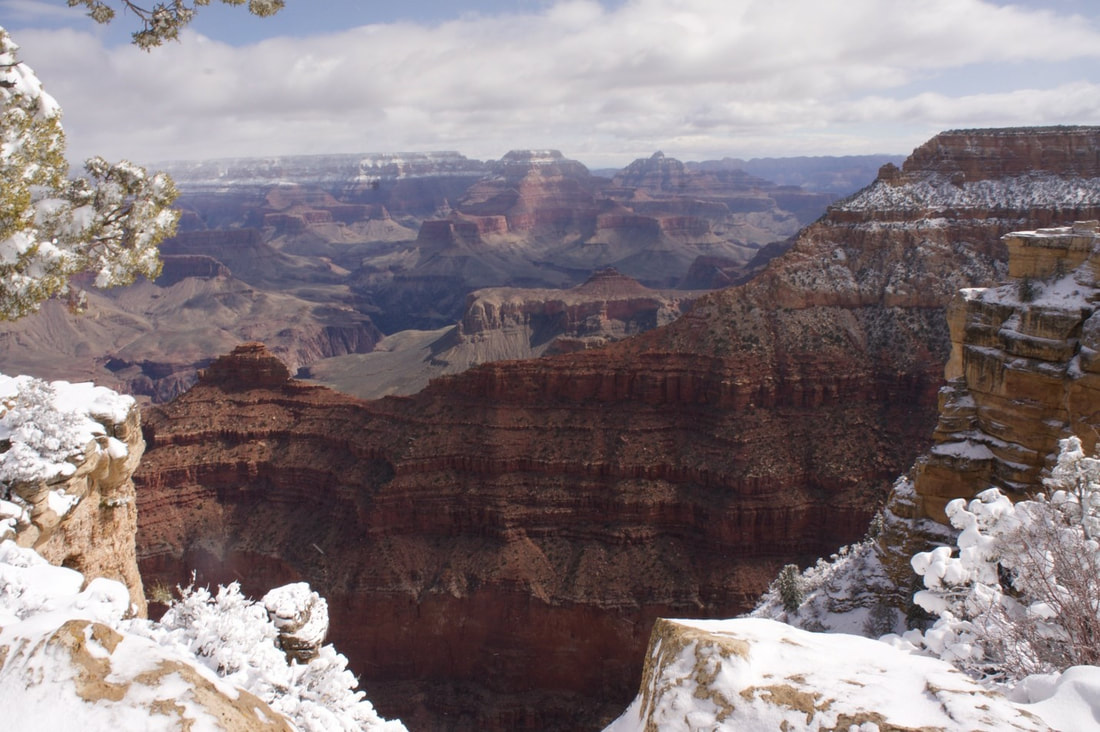 More impressive view of the Grand Canyon
​At that time it was close to 9am, and the snow and fog was too strong for anyone to get a clear picture of the Grand Canyon. My boyfriend sighed at the sight of it, saying it was underwhelming and that our previous trip together to Yosemite was one hundred times more exciting and beautiful. He was over it, and I was too. We were close to just leaving for good, when we decided to stop at the market down the road and get some tea and sit before the long road to Las Vegas. After readjusting, getting warm, and getting some energy at the market, we drove back to the Grand Canyon, and the sight was unbelievably gorgeous. This was finally what we were looking for!

Panorama of the Grand Canyon

After walking about three miles of the Grand Canyon, we finally said our goodbyes, and left for Las Vegas. But there was one more road block we had to deal with while we were driving down the road to Williams. That shield that was dragging a day earlier from a collision to a rock, had struck again. The snow was basically being dragged by the shield as if it was our very own makeshift shovel. This time we decided to cut it off because of the danger of it hitting one of the tires and making the whole car go flying. The timing couldn’t have been worse, as there was nowhere to stop for 20 minutes while we were making our descent from the Grand Canyon. Once we finally did, it was at the Flintstones themed Bedrock City, which upon turning into the weird attraction, actually pulled off the shield leaving us worry free and giving Arizona a little souvenir of our own. We finally were free, heading to Las Vegas. 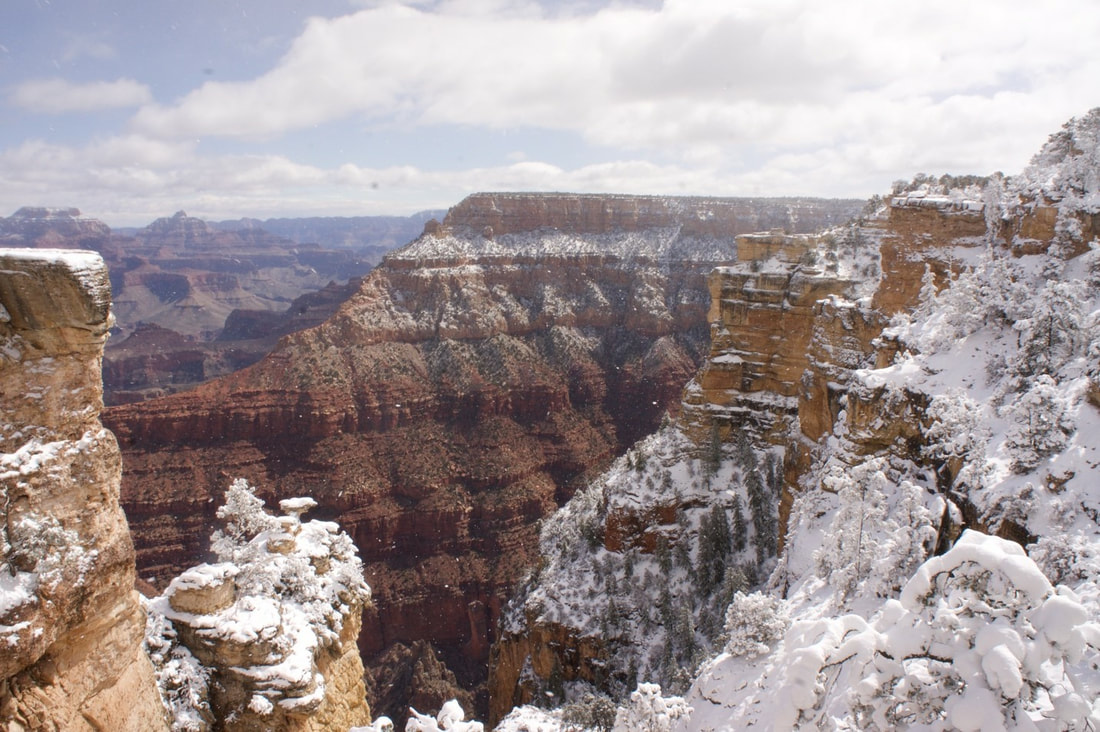 The view during intermittent snowfall
I’m sort of a person that trusts in fate. If enough things go wrong, I take it as a sign and back off. But this time we both had too much determination to go to this beautiful place that we thought would still bring us a fun time, even though it was obvious that it would be difficult. So many signs were there, but we just kept fighting it. I’m glad we did, because it makes for a good story. But more importantly… I’m glad we didn’t die from carbon dioxide poisoning in the car at the Grand Canyon. ​