Written & Photographed by:
​Dulcie Yamanaka
switching between Norman and The Green Goblin, his villain alter ego demands poor Norman to seek vengeance against Peter Parker AKA Spiderman. It's hard to believe that a mansion so beautiful could look like it's in a completely dark and grim city in films.

​​Greystone Mansion is location just off of the Sunset Strip. The estate grounds have been designated as a public park open daily from early morning to early evening. For first timers (such as myself), unless you’re with someone who has once visited the mansion before, the route to the mansion itself is a bit poorly marked. It was quite hard to tell if you actually made it to the correct location since all you see in front of you is the large rustic driveway gates which leave first timers gazing through the gates and seeing what’s on the other side. That is, until your eyes have traveled around enough, you only then notice that there’s an incredibly unproportioned teeny tiny Greystone sign in front of you this whole time. ​ 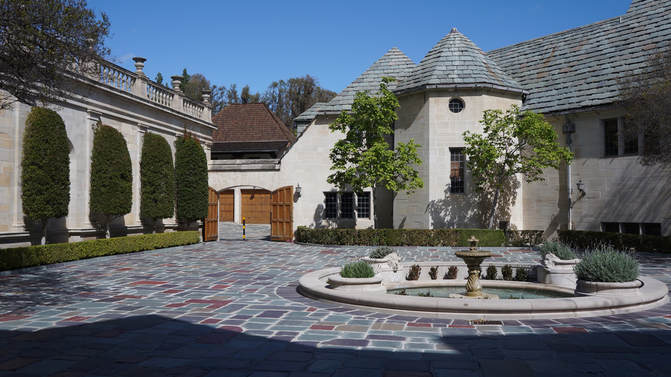 Entrance of the Greystone Mansion
The old Greystone Mansion, also known as the Doheny Mansion, is a lavish Tudor Revival mansion on a beautifully landscaped estate with lush English gardens, located in Beverly Hills, California. You’ll be surprised to know that a lot of films that you may have watched growing up were produced at this mansion. Just to name a few, films such as Ghostbusters, The Bodyguard, Guilty by Suspicion, The Big Lebowski, Batman and Robin, Spiderman, Austin Powers, Charlie’s Angels, The Muppets, and The Teenage Mutant Turtles were set here.
Beautiful architecture that makes it appear historical, stone lined walkways, elegant fountains that I’m sure only the bourgeois birds sip from, and a Zen lily pond with little koi fishes make this place even more tranquil and peaceful.  The stroll around the mansion was perfect, there are many secret passageways that only leads you to another area of the mansion. One secret passageway led us to a cute and small little well with absolutely no water (I got my hopes up for nothing); the second passageway, led us to a stunning lane of tall and strong cypress trees (the location where most married couples take their wedding photos); and the third passageway brought us to an old tennis court with a very classy seating area (a sport only for the upper class, as you can see).
​So now that you found the tiny sign and you know that you officially made it; the entrance from the front gates guide you to the heavenly classical gardens leading down to a beautifully elegant mansion. The wide and vast green garden flattens in waves with each gust of wind, making it appear like the meadow where you’d find Sister Maria singing her heart out in the Sound of Music.
Since the inside of mansion is not open to the public as this place is in high demand for events, meetings, and weddings, you can still have a lot of fun discovering outside the mansion that you probably can never afford to have. But it’s nice to know that there is a mansion in Los Angeles open to the public where we can at least pretend to feel like Audrey Hepburn strolling through the Eternal City in Roman Holiday.
Greystone Mansion
https://www.greystonemansion.org/
905 Loma Vista Dr.
Beverly Hills, CA. 90210