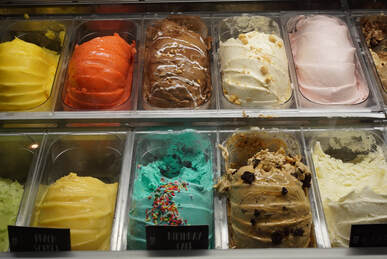 Owl's Crafted Ice Cream
​One of the things that America is most known for is franchises. They not only spread all across the country, but across the whole world. There are different types of them, like food, clothes, supermarkets. Think of any little thing and America will have a franchise for it. It came to a point where people are scared to go to the places that are not a part of a big multi-million company. However, the biggest problem with the franchises is the lack of choice and variety.
​
I’ve always loved ice cream, it has been my favorite dessert for a very long time. There are very specific things that I enjoy about ice cream, and specific things that I think are unacceptable. In my three years of living in America, I got really bored of eating the exact same cookie-cutter ice cream like Baskin Robbins, Ben and Jerry’s and Coldstone. The process of making that ice cream is so automated, there is nothing special or interesting about it. So I decided to go around the city and visit different ice cream places to see if I can find places that would be better than well-known franchises. I was pleasantly surprised by the results. Here is the list of ice cream places with short reviews so you can take a look and decide for yourself where you want to go. 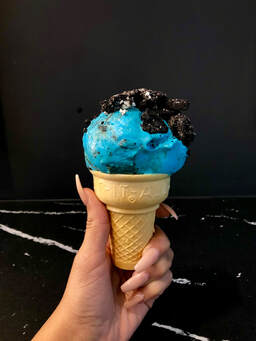 Cookie Monster from Afters
Afters Ice Cream - Hollywood
​
Afters Ice Cream has multiple locations across Los Angeles and Los Angeles County. It doesn’t have a lot of flavors, however, the ones that they do have are definitely very good. They are most known for their Rick & Morty specific flavors such as “Caramel Portal Ice Cream” and “Dark Matter Brownie Batter”, which tastes about as rich as it looks. My personal favorite is their “Cookie Monster” ice cream which is blue-colored vanilla ice cream with Oreo and chocolate chip cookies mixed inside it. Not only was the ice cream creamy and delicious, but the chunks of Oreo and chocolate chip cookie balanced out the creaminess very well. They can also put your ice cream inside of a freshly baked donut. I wouldn’t say that all of the flavors are completely spot on, but most of them are really good. One of my favorite flavors are lavender and cookie monster. 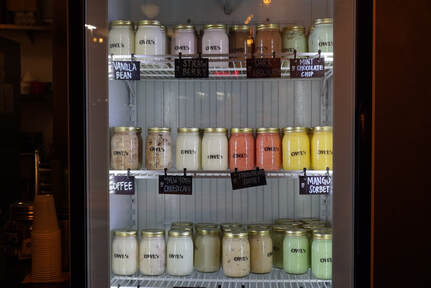 The ice cream shop itself is very aesthetic and pleasant to look at and be in. They have a lot of space for good pictures. As for the ice cream, they offer a great variety of both ice-cream and sorbets. The taste of the ice-cream is very good, it’s not overpowering, it’s very soft and creamy. Not only have they upgraded their waffle cones to feature multiple flavors but they have also added a multitude of tasty flavors that they rotate often. Even though it’s not too unique, Owl’s “Cookies & Cream” flavor is something out of this world. Not only is the creaminess factor unmatched, but the flavor is unlike any cookies and cream I’ve had before, amazing stuff. They also have a stamp system that you can earn free ice-cream with. They have the best looking ice cream I've ever seen - it look extremely appetizing.
​
Variety: 10/10, 10/10
Atmosphere: 9/10, 10/10
Taste: 9/10, 10/10
Total: 58/60 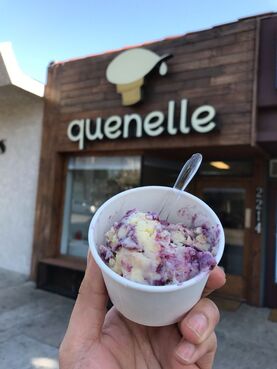 Private ice cream places differ from the bigger chains because they can be a hit or a miss, unfortunately, Quenelle was a miss. In their case, the huge variety of unique tastes is not a good thing. I tried a Red Bull flavored ice cream, and it tasted nothing like Red Bull. The earl grey tea that I got was so overpowering and sweet that I couldn’t finish it. And I always finish my ice cream. The taro ice cream that I ate had pieces of ice in it as if it melted and then froze again. I couldn't finish that one either. The texture of the ice cream was strange and almost grainy. The layout of the place was weird, the entrance and the exit are two different doors. The checkout was located in a completely different room away from the ice cream itself.
​
Variety: 8/10, 7/10
Atmosphere: 3/10, 3/10
Taste: 2/10, 3/10
Total: 26/60 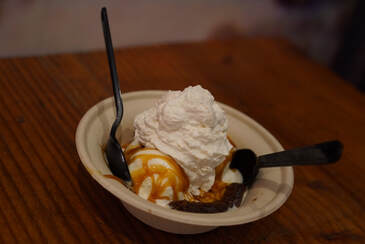 McConnell’s has been around a while, so they have some street cred for the underground ice cream business. The first time I went to this place, I was very skeptical about it. Usually, I don’t like pieces of food in my ice cream. But when I tried McConnell’s, it completely blew my mind. A big variety of precisely assorted flavors are all so well combined. The ice-cream is creamy and soft. The pieces of food are small enough not to bother you while you eat. The taste from McConnell’s is definitely very subtle, I recognize that some might find that amazing but personally, it’s not for me. The texture of the ice cream was definitely amazing though. They have a nice long bench outside that you can sit on and enjoy your ice cream. However, the place inside needs some more seating. One of my favorite flavors from here are Sweet Cream, Honey and Cornbread, and Earl Grey.
​
Variety: 9/10, 6/10
Atmosphere: 9/10, 8/10
Taste: 10//10, 9/10
Total: 51/60 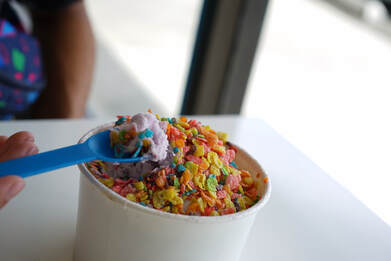 Although it does seem a bit unfair to put it on this list with the other giants, Sweet Snow on Google was listed as ice cream so it’s only fair to compare it to the others. This isn’t your regular ice cream. It is frozen ice cream that is shaved into a bowl. Because of it, it feels very light and melts in your mouth within seconds. Unfortunately, that’s about everything good about it. It was the worst of both ice cream and shaved ice, I think shaved ice is strongly inferior to ice cream in every way, but I would gladly pick up a shaved ice bowl instead of Sweet Snow. It was colder than normal ice cream and was difficult to eat, the texture was strange and half melted in your mouth, half turned hard but wasn’t inherently bad.  The toppings that are added all cost extra, and without toppings, it really feels like you paid for nothing. When I was there, they forgot to put the syrup on top of it. They only have around 5 or 6 flavors, which is not great considering they keep ice cream frozen blocks, which means they can make a lot more flavors. The tables are located very close to each other, you don’t feel any privacy. In the end, it felt like I paid $7 for a cup full of air.
​
Variety: 2/10, 2/10
Atmosphere: 5/10, 5/10
Taste: 3/10, 1/10
Total: 18/60 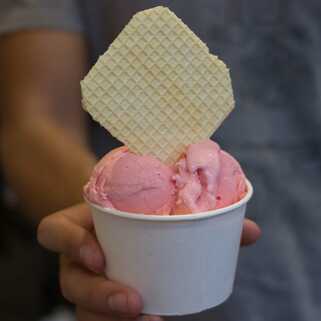 A Middle-Eastern ice cream shop full of unique flavors like cucumber and jasmine. The flavor I tried was Pink Rose, which was magnificent. Although some of the floral flavors are considered overpowering by some, I believe the Pink Rose was delightfully strong. They have a very big variety of flavors, which include cucumber, pomegranate, jasmine and more. If you want to try something different and something new, this is a place to go to. However, they still need some work on their ice cream texture and flavors. Some of the flavors were a little overpowering and ice cream texture can be inconsistent and have bits of ice.

HIT!
Sometimes you can find the most wonderful ice cream in the smallest places, bakeries and shops hidden all over this great big city. And I believe that the experience that you get from these tiny places is way more pleasant than just going to the closest Baskin Robbins and buying the same scoop for the 10th time in a row.
​