Written and photos by Meg Shimizu 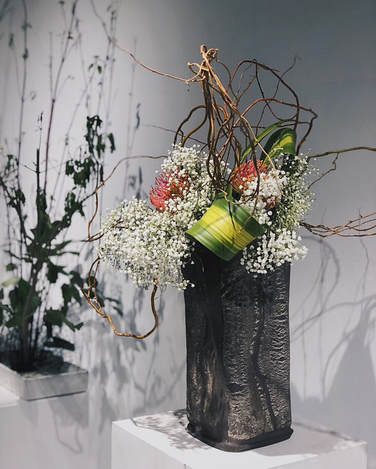 Ikebana, it is a Japanese flower arrangement. “Ike” means alive and “bana” means flower in Japanese. Ikebana is not the same as the Western-style flower arrangements you see at the restaurants or hotel’s reception. Arrangements are made based on some certain rules and it values the beauty of asymmetry. Ikebana does not only have one style. Ikebana consists of more than 300 schools and it holds more than 700 years of history.

The style I am learning is called “Sogetsu” style. The Sogetsu style was founded in 1927 by Sofu Teshigawara and it is considered a newer style. I have been practicing Ikebana over 8 years and yet I am still in the process of learning to become a better artist. Even though Sogetsu is considered a “new style,” with its unique and dynamic style, it is considered one of the biggest three schools in Ikebana. There are a lot of people in United States who are learning Sogetsu style Ikebana. Sogetsu LA Branch has been active over 40 years.

​​You do not need any designing background to start Ikebana because you will start with learning rules for Ikebana first. These are the equipment you need to start learning Ikebana. 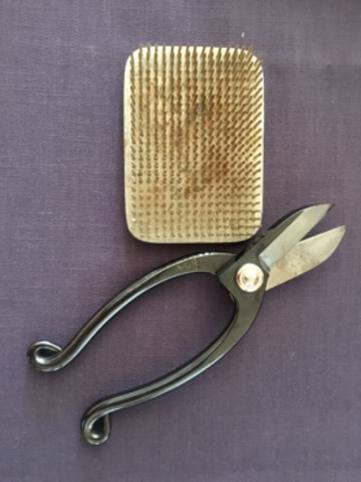 ​The basic rules of Ikebana are Shin, Soe, Hikae. Those are the main pieces of the arrangement. Shin is the longest stem. It should be at 1.5 times of length or width of the vase. The second longest stem is Soe. Soe should be around three-quarters of the length of Shin. Hikae should be half of the length of Soe. Other stems besides those main three branches are called Jushi, which means support branches in Japanese. Those stems are to compliment the main branches.  The number of branches are also important. It is considered that odd numbers always more balanced than even numbers. 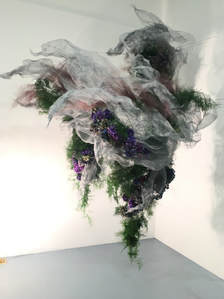 I keep mentioning that there are rules in Ikebana, however, Sogetsu is more of a freestyle compared to other schools. After two years of learning basic rules, you will be able to break the rules and really express yourself.

For materials, there are no rules. We do not only use flowers, but you can also use dried materials, fruits, vegetables,  and non-plant materials, such as wires, papers, plastics and so on. We had an exhibit recently in Little Tokyo in November. For my individual work, I used huge leaves which were half dry to play with the texture of the plant.

​As for our group project, the theme was mystique. We used chicken wire and window screens to create mass and shape and make them into a huge tornado with both dried and fresh hydrangeas.

Ikebana can be very therapeutic. When I am stressed, Ikebana makes me concentrate on one thing without thinking. Ikebana can express a flower's organic beauty that a simple bouquet cannot express. There is no right or wrong in Ikebana. It does require practice, but it is an art that everyone can express themselves.

​If you are interested in taking Ikebana classes, here are some classes available in LA County Area:
www.sogetsula.com/classes