Written and Photographed by Marta Huo 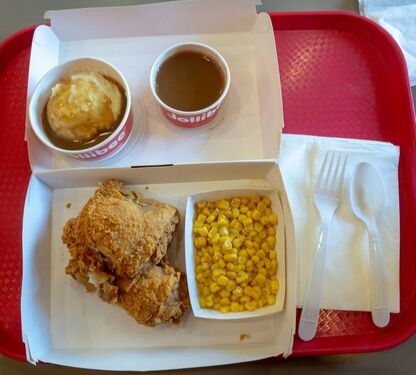 Rocky nudged me to my right and there it was. Jollibee, home of the famous ChickenJoy had the sun shining down like it was some kind of a sign. Although, I had seen the restaurant’s name before, I wasn’t exactly sure what it was. “Jollibee is kinda like a combination of McDonald’s and KFC,” Rocky explained. “I think it tastes okay - it’s only fast food, after all. But it’s really popular in the Philippines, so as a Filipino I love to support it!” Approaching the double glass doors, I was greeted by a smiling, waving red bee, who I assume is Jollibee’s mascot - a jolly bee. I opened the door and walked in, feeling slightly overwhelmed and kind of weirded out by this 5’6” red bee staring at me.
​
It was 5 P.M. on a Thursday, and dinner rush was in full effect. Without thinking, I got in line and before I knew it, it was my turn to order. Right off the bat, I was thrown off course when I read menu items like Jolly Spaghetti, Chickenjoy, and Jolly Hotdog. In a panic, I ordered C2, which was two pieces of ChickenJoy with buttered corn and mashed potatoes. After receiving a fancy food alert disk, I zig-zagged through the crowd into one of the clean white tables with surprisingly comfy red couches. The fancy food alert disk buzzed, while I was still taking in everything that was happening around me and trying to figure out what the heck Jolly Spaghetti was. I picked up my tray of nicely packaged food from the front and returned to my table.
​Opening up the tan paper box, it revealed two pieces of golden crispy fried chicken with a tray of yellow corn. The buttered corn was exactly what it sounded like: corn cooked and covered in melted butter. In my own personal option, the corn tasted exactly like KFC’s buttered corn. Nothing to complain about; it’s a great side dish. I moved on to the mashed potatoes, peeled back the plastic top, and was immediately hit by the smell of the gravy. ​ 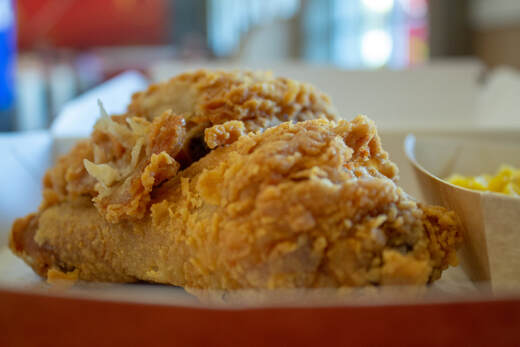 ​Opening up the tan paper box, it revealed two pieces of golden crispy fried chicken with a tray of yellow corn. The buttered corn was exactly what it sounded like: corn cooked and covered in melted butter. In my own personal option, the corn tasted exactly like KFC’s buttered corn. Nothing to complain about; it’s a great side dish. I moved on to the mashed potatoes, peeled back the plastic top, and was immediately hit by the smell of the gravy. I was not excited, because I was not the biggest fan of gravy. I’ve always wanted to like gravy, but I still hated it after trying it every time I see gravy on mashed potatoes. With my fork, I picked up a small bite size of the creamy white mashed potato with the least amount of gravy on it. The texture was wonderful, soft, and creamy, but the taste of the gravy distracted me. The overt saltiness with the slight bitterness killed my taste buds. The mashed potatoes were out and done with. I still hated gravy.
​
Washing down the last bits of tastes of the horrible mashed potatoes, I reached for the chicken - wait, sorry, ChickenJoy, not chicken. Which reminds me, what in the world is Jolly Spaghetti? Looking over to the people beside me, all I saw was ChickenJoy, mashed potatoes, fries, and some weird meat patty with rice, but no spaghetti. Oh well, I continued with my ChickenJoy. Biting into the slightly greasy, crispy, perfectly battered chicken, I was overly satisfied. The juicy meat on the inside with the crunchy shell on the outside was the perfect balance. Now I know why they named it ChickenJoy and not just chicken. 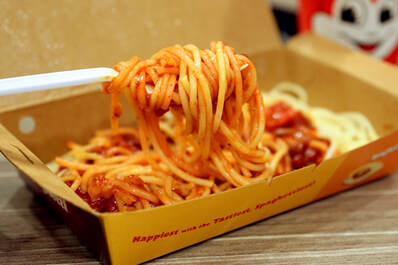 Eventually, I finally had the time to go back to the infamous Jollibee and try their Jolly Spaghetti. For only $4.99, this sweet-style spaghetti sauce with ham, sausage, and ground beef was topped with cheese and also came with a fried chicken leg (and the nasty gravy!). I did not know what to expect when I took my first bite, but I did expect it to taste “jolly”. To my surprise, the sauce wasn’t sour or tasted like tomatoes at all. It was sweet, very sweet! Confused, I looked up on the internet what this mysterious sauce was, and found out that it was banana ketchup. I learned that the Philippines started to use bananas when their supply of tomatoes diminished during World War II.

The taste is definitely a unique taste, and I honestly can’t say that it’s my favorite spaghetti sauce. However, if you like a sweet meat sauce without the taste of tomatoes, their Jolly Spaghetti might be able to bring you the joy that I sadly did not experience.
​
​Wiping off my mouth and my fingers, cleaning up my tray, and walking out of the restaurant, I was full and happy - mostly with the fried ChickenJoy. Jollibee with their unbeatable prices, and a menu that combines the Filipino and American food culture together, definitely made me want to come back. Rocky did say that he liked using Jollibee to introduce his friends to Filipino culture, and I now understand why. “Their mascot is a jolly bee! Cute and friendly,” he said. “And the restaurant has foods that many people are familiar with, like fried chicken and cheeseburgers. But if you wanna try out Filipino food, they also have tapsilog and halo-halo. There’s something for everyone.” At Jollibee, I had a taste of both cultures - America with their fried chicken, buttered corn, and mashed potatoes, and the Philippines with their cheesy spaghetti and banana ketchup sauce. One day, I’ll perhaps be daring enough to try out the other staples of Filipino food culture, but I wouldn’t mind coming back for their ChickenJoy.