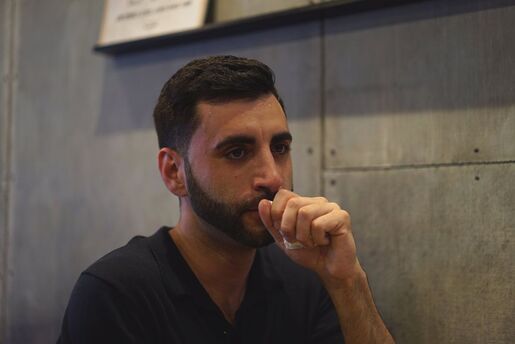 Kas enduring the fiery pain from the Spicy Chicken Stew!! #Bruh #YousaidthiswasEasy #YouGood? #BYE!
I had the privilege of bringing three gladiators who were brave enough to take on this fiery challenge. I wanted to challenge their taste buds because prior to this challenge, Kas, Spencir, and Chris were super confident that the challenge was going to be a walk in the park. They were prepared because even before they arrived, Spencir brought some Zantac prior to the challenge and Tums for after the challenge. Since they mentioned they’ve handled other spicy cuisines, Korean spicy foods tend to be overwhelming, so I knew this was going to be tough. However, they had no idea what they were going up against.
​ 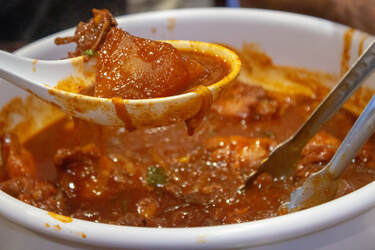 The Spicy Chicken Stew with: Potatoes, Rice Cake, and Noodles #K-Town #Y'allthoughtthiswaseasy
As our group was seated, I could see symptoms of nervousness manifested from my peers. However, Kas assumed we were just here to enjoy the food because he didn’t want to damage his stomach further. Kasra claimed, “This made me feel at ease because I thought it wouldn’t be so bad, mainly because I’m dealing with stomach issues for the past month and have had other issues in the past”.

​However, I directly told him we came here to challenge. Once I told him they were going to take on the spiciest one, Kas wanted to back out. But, he kept his word, and was prepared with two others in taking on this beast.
Plus, as a recommendation, I also ordered side dishes. The side dishes were traditional Korean sides, rice balls coated with perilla leaf oil, and a spam mayo rice ball. The side snacks were to balance out with the spiciness of the stew. In a sense, the side snacks were a palate cleanser. ​ 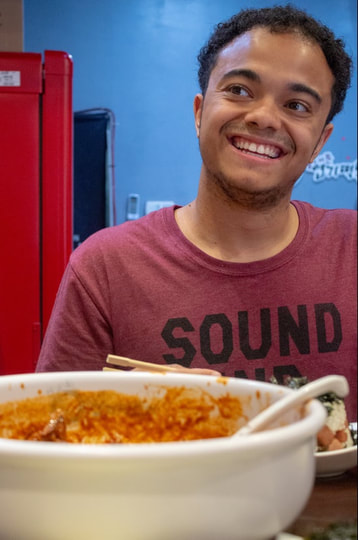 "Although spicy, that didn't stop me from having a good time!" #Delicious #Swag
After waiting for about 15 minutes, the king of spice arrived. The meal was poured in a giant bowl with the colors of sauce looking dark reddish orange. The pungent aroma of the stew was so spicy that it made me tear up in a way. All of my peers that witnessed this fiery dish with an alarming look. As they began to consume the soup, there were already signs of sweat upon their faces. Surprisingly, as much as they were shocked with the heat, they were cruising along as if it was just another meal. The three challengers surprised me and I began to wonder if this level of spice was nothing. In all honesty, I began to feel a little concerned that rather than this being a challenge, the event almost felt like a new food joint they’ve never been. Especially Spencir, he looked calm as ever and gone on to say, “ I went into this challenge expecting the heat to burn right through my esophagus and to destroy my stomach. After I took my first bite I felt confidence overflowing within me, “This isn’t even that spicy, in fact, it’s delicious!” is what I thought to myself”. As soon as he continuously consumed the fiery dish, the confidence began to dwindle down because they’ve already crossed the point of no return.

Then at about the halfway point when the food is left with all the sauce, signs of struggle begins to manifest. They began to not only consume lots of water, but they also received a complimentary yogurt drink from the check-in on Facebook. My friends began to sweat as if they were in a sauna, especially Kas and Chris. Chris at one point took off his glasses due to the aroma of the spice hovering his face. In the latter part of the challenge, Chris began to struggle and stated, “I found myself wiping away mass amounts of sweat from my forehead and eyes just to be able to eat comfortably, whereas my tongue and mouth had been completely fine and intact”. In the end, these three gladiators were able to take down this fiery beast and were able to claim that they were able to finish it. The bowl was completely cleaned leaving only small traces of the salty soup on the bottom. They won the bragging rights even though there were no formal awards given. However, with all the smiles and cheers, the next segment was the afterburn. The pouring sweat from my peers was a manifestation of a true warrior. Luckily, Spencir came through the rescue with Tums to help alleviate the pain of the aftermath. Even one of the employees was very surprised to see them complete the challenge exclaiming: “Wow, I respect you guys a lot!” My peers displayed showmanship and determination because most people in the restaurant weren’t brave or crazy enough to take on this diabolical fiery challenge.
​
It takes a team to overcome this fiery traditional Korean food and for myself, I was happy to see that they enjoyed it rather than doing the challenge just to complete it. As the individual who is not a fan of spicy food anymore, I don’t think I can go back to Yup-Dduk due to the pungent aroma of fire that hovers around the restaurant. It’ll be difficult to go back because the vast amounts of spicy foods I used to consume in the past caused me to have constant acid reflux. Due to the constant acid reflux, my doctors prescribed me Nexium, and I used to take medications for high blood pressure because lots of spicy foods contain high sodium content.  Next time you’re looking for new food joint that involves spice, visit the fiery red coated sign of Yup Dduk in Koreatown, Los Angeles and make sure you select wisely. Be careful what you wish for because this challenge is not for the faint of heart. If you do decide to take on this challenge just like my peers did, they recommend: “Make sure to bring and take a pain reliever for your precious stomach.” 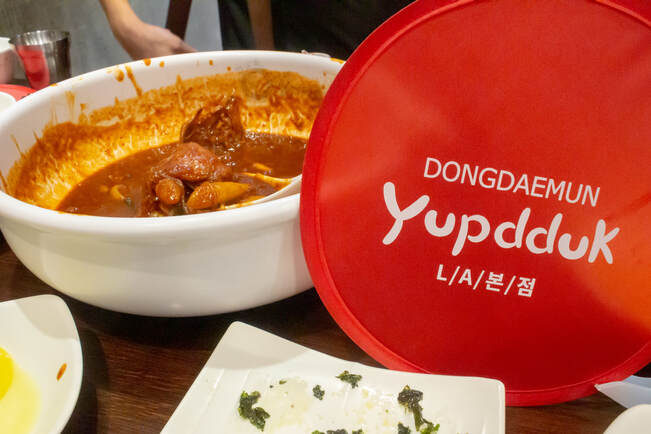