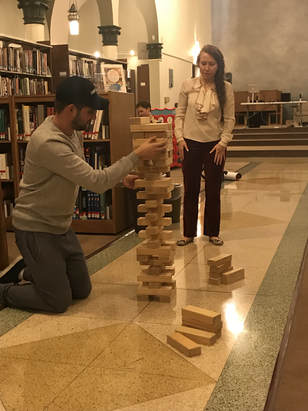 Architecture Students compete at Giant Jenga
If you’ve ever watched people playing a game of Jenga, you’ve probably experienced anxiety each time a player pulled out a little block from the stack - imagine that on a much larger scale...literally. Woodbury University’s library was filled with board games and life-sized fun on Friday, Nov. 3.

Games and Taco Night was hosted by Healthy Living Program (HLP), 7500 Club and the Library. Healthy Living's Risa Williams and Library's Karla Bluestone made this event come to life with the help of Joymode and Daniel’s Tacos. If anything is an indication of a good time, it’s running out of food. They initially expected around 50 people to show up, but with almost triple that, it definitely exceeded expectations.

After grabbing a bite, students battled it out for the “Games Expert” title. Eight popular games were selected as part of the competition: Jenga, Exploding Kittens, Twister, Battleship, Guess Who, Kings in the Corner, Catan, Jenga, Sorry and UNO. 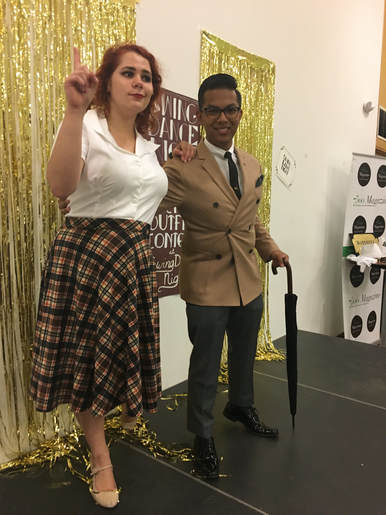 Swing Dance Night hosted by Healthy Living and 7500 Club
DJs (yes, there were two) Malik Walker and Nico Madia made sure to blast upbeat tunes throughout the night to keep players pumped.

By the end of the event, there were about 120 students and faculty gathered in the Library. Only the lucky 8 winners took home a hat with their new expert title, USB flash drives, and a $10 Starbucks gift card.

This was just one of many events hosted by HLP (Healthy Living Program). If you’ve ever seen flyers about Improv Comedy, Yoga, Meditation, Self Defense, Art Night and the Museum Scavenger Hunt, now you know who’s behind them.

HLP has worked with 7500 Club and the Associated Students of Woodbury University in the past and look forward to more collaborations in the future. After a successful Swing Dance Night on Monday, Nov. 16, Williams looks forward to expanding the genres and possibilities of next semester’s itinerary. The event was a combined effort between 7500 Club’s Executive Board; Anahit Kardzhyan, Andy Barrales, Liz Grigoryeva, Amanda Orozco, and Laura Gutierrez.

Danielle O'Neill, an instructor from Fred Astaire Dance Studio in Pasadena, taught students East Coast swing and danced all night to Louis Prima, Benny Goodman and Cab Calloway. There was also a retro outfit contest, in which Taylor Speights claimed the $50 prize for her retro red ensemble.