​Lighting the World Around Us
An Interview with Angela Gundelfinger

Written By Sarah Olmedo, with photos by Brad and Laura Peach, and Angela Gundelfinger 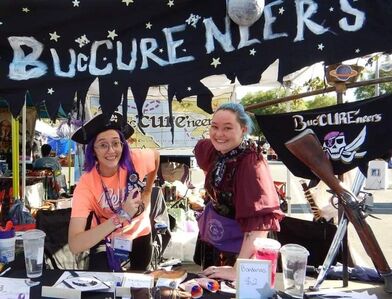 Harley(left) and Angela(right) hosting the team booth | Courtesy of Brad Peach
Hardship is a great motivator for pushing forward to make a difference. Societies and fundraising are born from struggle, from people who want to make a better place for those hurting in the same way. Angela “Peach” Gundelfinger is one of these people, proud captain of an American Cancer Society Relay For Life team.

The Relay For Life stands for fighting back against cancer, while celebrating those who are currently fighting, survivors and remembering those we have lost. It’s about creating a community of support for this disease that affects many of our lives. Angela is proud to be serving as a Relay captain fighting daily in honor of cancer's effect their life and the lives around them. 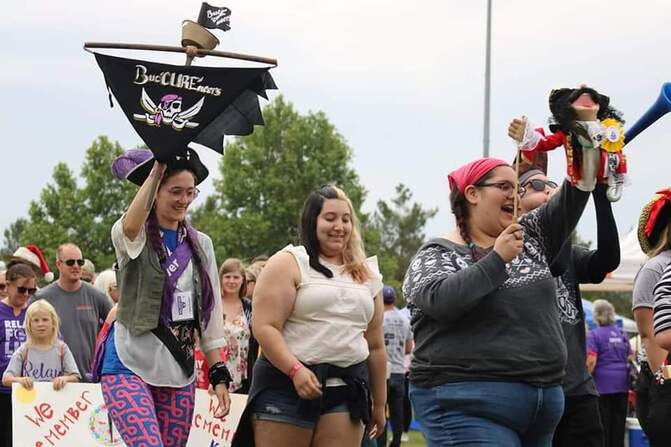 Relay For Life team track walk with members Harley (left), Hunter (middle) and Omi (right) | Courtesy of Angela Gundelfinger
Before the pandemic, Relay was a 24-hour event. “Cancer never sleeps, so neither do we,” Angela told me. They also expressed that they viewed Relay as more of a 48-hour event for the teams, because of setting up the day before, and tearing down the day after. It would take about 6 hours the day before to set up any tables and decor for the team booths before the event. At 6 am the day of the event, the teams would set up everything else. This includes games, prizes, for sale items, and mission statements that inform people about cancer.

​For any new members joining or those looking to join, Angela really recommends asking questions. There’s no need to be afraid when you ask, because there’s always new things to learn. Even after 22 years of relay, they’re still learning. Some teams are dedicated to helping out new teams, so Relay is built on support and community. Obviously, Angela also recommends following the rules, but they also had there's nothing wrong with having fun while you’re at it! There’s no reason to hesitate to be yourself and be imaginative about your work.

"Learning how strong people are makes me feel like I can do anything." 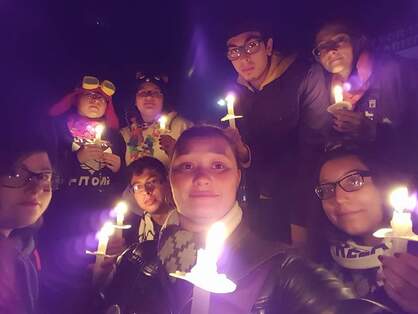 Luminaria ceremony team selfie | Courtesy of Angela Gundelfinger
By far, Angela’s favorite part of Relay is the Luminaria ceremony. To begin the ceremony, a speaker tells their story with cancer, or the story of someone they’ve lost,  holding a candle.  Everyone at the event is also holding candles at this time. Then, the speaker lights their candle, and begin lighting the candles of those around them using that same candlelight. It represents how cancer touches everyone around us. "Learning how strong people are makes me feel like I can do anything." Angela said about the stories shared. It's a beautiful, vulnerable moment where many people express their feelings and the wars they silently fight every day.

The track in Central Park is lined with luminaria lanterns, little paper bags that have been decorated in honor of those we have lost to cancer. People then take a lap in silence to look at the bags while a slideshow of those lost plays on the stage screen. Angela loves it because it truly shows the heart of the relay community; "There's never a dry eye in the audience," They explained. "You know everyone around you is going through the same thing."

"The scariest thing is being told I have cancer." 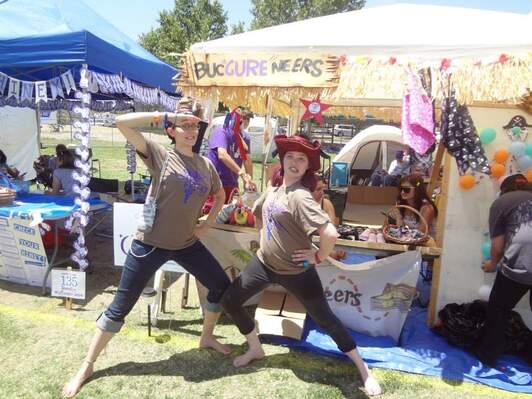 Harley (left) and Angela (right) posing in front of the team booth | Courtesy of Laura Peach
The Relay For Life is vital for getting information out about cancer. “The scariest thing is being told I have cancer,” Angela said. This is why it’s so important to them and others at Relay to spread awareness about cancer and do everything they can to help. It also helps raise so much money for those who don’t have the means to handle the diagnosis. For Angela personally, it was something to keep them going and what helped them get through substance abuse. They always made it a point to be sober at Relay, and the support from the community has really helped them stay sober to this day.
​
New teams are always welcomed and much needed at Relay. There’s no age minimum or limit, there’s a team that even as a captain who is eight years old! And, as you can see, it's an event that is truly worthwhile and genuinely helps out the community. So much change has happened because of the American Cancer Society–The Cancer Action Network is the reason why there are warnings on cigarettes that they cause cancers and why smoking is not allowed indoors. It’s something that leaves such an undeniable impact that will go on forever, and I’m incredibly excited to be a part of this year’s Relay for Life myself. I hope you will consider joining, too.

More information about Relay For Life can be found at: https://www.cancer.org/involved/fundraise/relay-for-life.html