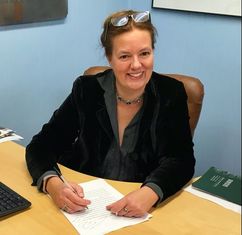 The trees turn into an orange sea as fall creeps onto the streets. Dogs being walked as cars drive by; sun setting across from the rugged mountains that will turn the sky into a sea of deep purples in and pink. In the small city of Monrovia lives Professor Linda Dove. When she isn’t teaching at Woodbury or PCC, Professor Dove is in an award winning poet, pushing her limits and exploring the impact her words can create. Her newest chapbook This Too is a monumental piece and stepping stone in her writing. Monrovia, home for Linda Dove, is still a mystery to those who only drive by it on the 210 freeway.

How long have you lived in Monrovia?
5 years this coming month actually. 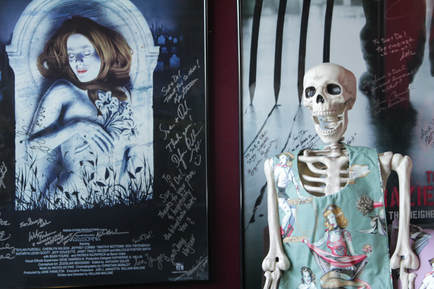 Dark Delicacies, Burbank
​Have you seen the city change in the last 5 years?
I think that there is a lot actually a lot more vibrancy going on now than there was 10 years ago. There were not as many nonprofit organizations, writers organizations, and arts organizations that I think there wasn’t money to support events and readings and various art shows. And it was I think really difficult for a lot of creative types for a while there; people were not hiring and people were not giving grants, it was harder to come by events and venues to do readings and that sort of thing. I found a writer’s community 9 years ago by starting a blog and looking for other bloggers in the area who were writers. I communicated with several writing groups in the area that way but it was less organized than I feel like now. There are many more magazine publications in just 10 years.
​
I have to ask, Monrovia it’s pretty small. What's the weirdest thing that’s ever happened to you in Monrovia?
Monrovia is a pretty staid place I have to say. I think it’s too "Mayberry" for weird stuff. There are a lot of bears-in-swimming pools level of weird, though.

What is your favorite find in Burbank?
I do like the thrift stores and other funky-inspired shops along Magnolia Blvd. If you’re looking for that odd piece of vintage clothing or goth-inspired jewelry (octopus necklaces! or spider rings!) then that street has you covered. I once bought a pair of crystal-covered skull earrings at Dark Delicacies, for instance. Awesome. As for food, Tony’s Darts Away is my go-to. I found them about 8 years ago, or so, when I was eating vegan, as half their menu is devoted to plant-based foods, but I continue going back even now, in my more vegetarian/pescatarian phase, because I like the laid-back vibe and they have stacks of board games you can play, which is cool even if you don’t play them.

Is there a place in Burbank that has inspired you to write? If so where?
La Tuna Canyon has a nice little hiking trail—or maybe had, I’m not sure what’s happened to it since the fires. Driving La Tuna Canyon since the fires and mudslides, it has looked like an absolute moonscape. Like it can’t be real, those brown and gray hills mounds. It looks fake. Not a tree or bush or grass in sight. That made it into a poem recently. I just drove by the other day, and there is sudden lavender everywhere on the hillsides. Which is a different sort of unbelievable.

Best place to get a cup of coffee in Monrovia?
There are a couple of coffee houses in Monrovia apart from Starbucks. In downtown Monrovia, I mean I love the Myrtle Tree Cafe which is a very funky little store and cafe that sells olive oils and wine and soap and honey-they have food there they have fountains there they have couches there. It’s nice to go there and have- they have wine they have meals and they coffee. So, I will have coffee there with friends usually, and I would recommend them.