How to Load a
35mm Film Camera

Written and Photographed by Nick Bianco
It’s no surprise that history repeats itself, the culture and artistic taste is no different. Living in the digital age that we do, it seems that we’ve become increasingly fascinated with things that are seen as “vintage”. Why is that? Well, in the simplest sense, we’ve become obsessed with what we can’t have, or more importantly, what we can’t easily recreate. In addition to this key element, the minuet distinctions and flaws that we see in some of these vintage things, seem to be a billboard for authenticity, especially in photographs. Over time, the mediums we use to take photos have actually implemented specific filters and editing technology that will add the flaws of grain, light leaks, and lens flares, after the photo has been taken.

​STEP ONE
“This is my roll, there are many like it, but this one is mine!”

Rolls are typically separated by ISO speed, ranging anywhere from 50 ISO, all the way up to 800 ISO, and that is just your typical, run-of-the-mill film. Without getting too into semantics, ISO is the sensitivity of the film. The lower the ISO, the less sensitive the film is, and vice versa. Image sensitivity ultimately leads how much light can be exposed onto the film, without compromising image quality. For example, if you are shooting in the middle of the day, you should have no problem getting away with shooting on a film that has an ISO count of 100 to 400.

It is also important to keep in mind that the higher the ISO count, the grainier the image will be. A good rule of thumb I like to live by while shooting is that the “vintage” grain tends to be more than enough in the 200-400 ISO range. Once you’ve picked out your film, you need to figure out how to actually get it into the camera.

STEP TWO
Getting Your Hands Dirty

Getting the leader to catch into the gears will take a bit of practice, so I recommend starting out with a cheaper roll of film, possibly FujiColor C200 (ranges between $4-$6 a roll). In my experience, I’ve noticed that the vast majority of cameras have a distinct “load film here”  signal, indicating where the leader of the roll needs to feed into.

STEP FOUR
All Wound Up!

You’d be surprised how quickly thirty six images go by. Especially in this day and age, we’re essentially given free rein to take as many photos as we can of one thing, and then pick out the best one afterwards. This ends up being a blessing and a curse when shooting on film. Once you’ve shot on a few different rolls, at varying apertures, shutter speeds, and ISO counts, you’ll get a much better idea of what your final image will look like. 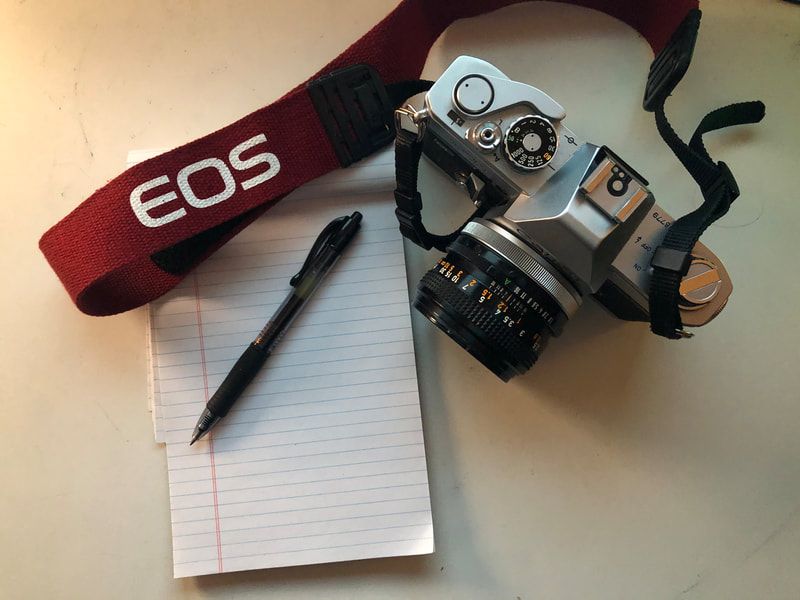 Until you reach this level of professionalism however, I recommend carrying a small piece of paper and a pen on you, while shooting, to take notes of what the three key settings are (aperture, shutter speed, ISO count) and what image number it is in your roll. It doesn’t even have to be on a piece of paper, it can be on your phone, as long as you are keeping track of your settings and the photo count, you should be able to go back, after the development process, and reference which photo was taken at which setting, ultimately finding the sweet spot of your camera and the film you’re shooting on.

A FINAL TIP
It Ain't Cheap

If I can be completely transparent here, picking up film photography is not a cheap hobby. I started shooting 35mm in early April 2020, and have easily spent in the $500-$600 range. Paying anywhere from $10-$14 for a roll of film, not including development prices ($13 for color, $18 for black and white), is a common occurrence. If you have the available funds however, this is a great learning experience for those visually creative individuals out there. Being able to shoot only thirty six photos on a roll, while it can be limiting, definitely raises the stakes when it comes to what you’re shooting, at what times, at specific settings, and makes sure you feel confident about the composition of the frame.

BUT MOST IMPORTANTLY...
Enjoy The Results!