Nature vs. Us: Malibu Cafe

Written and Photographed by Galia Gharabeg & Brittaney Bautista
It was a clear, sunny Friday morning when my friend Galia and I decided to grab lunch for the first time at Malibu Café, a local gem nestled between the Santa Monica Mountains. Galia and I made it to our destination thirty minutes before the café even opened and were the first customers there for our reservation at 11:30AM. Talk about punctual!

"I didn’t know it, but I picked a great day to get attacked by nature."

Giant trees loomed the entrance welcoming the both of us. We pulled up to the valet and decided to walk around the premises to kill some time. Small gusts of winds began to pick up as we walked around. Trees rustled in the background, the chandeliers hanging from the trees began to clink while leaves began to slowly fall to floor. At the same time, Galia became more and more eager to show me everything that makes this café so unique. ​ 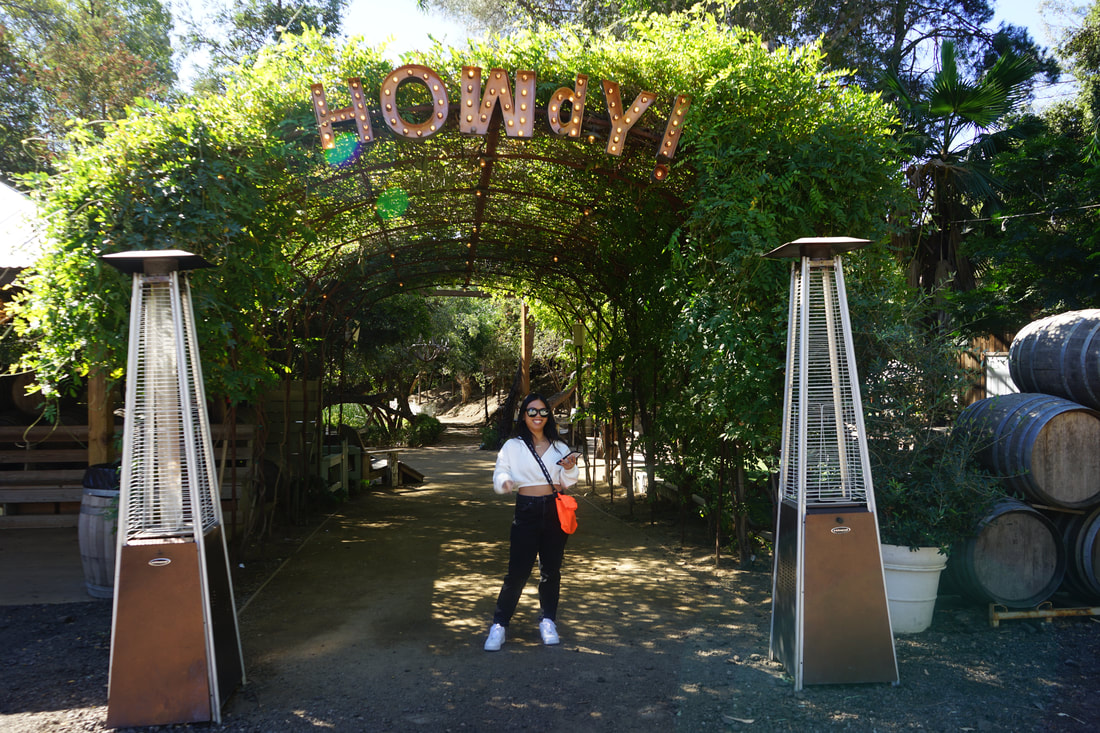 Hidden off Latigo Canyon Road at Calamigos Ranch is the whimsical Malibu Café. This gem goes five generations back in the Gerson family. The Gersons were inspired to create a dining experience unlike any other that greatly reflected their roots of cowboy lifestyle. Malibu Café puts a modern twist on family-style barbecue, fusing the Gerson family heritage and California’s heritage. Malibu Café has been featured in Los Angeles Magazine, ABC 7 News, and LA Weekly, thus making Grant and Helen Walter Gerson’s café one of the most talked-about cafés.
Knowing that information, we decided to visit Malibu Café to see what all the hype was about. Of course, knowing Galia, being on time is not enough. You have to be thirty minutes early even though the café is not even open yet. After few U-turns and missed stop signs, we found the entrance to the café and entered the parking lot speeding like we were racing.

"I was driving like I was Dominic Toretto from The Fast and the Furious."

The lot was empty, which confused us because we didn't know where we could park until a man approached the car and told us that he would park the car.
Once we approached the entrance, they told us that we were not allowed to enter yet because the café was not open. We decided to wait near the entrance and that is when Mother Nature decided it was a good idea to start attacking me. As we were patiently waiting to go in, a branch from the largest tree around decided it would be fun to break on my head and see what happens. Luckily, I survived and had a good laugh. Mother Nature did not take it as well as we thought. A few minutes later, a few bees came after us, and everyone around us got to see the first “Galia and Brittaney” live comedy show. As Galia was running away from the bees, acting like a lunatic, a three-year-old boy standing next to his parents was watching us with this confused look on his face. ​​

"At that moment, I realized how ridiculous we must have looked: two grown-a*s women running around like animals."

Finally, the clock hit 11:30AM and, before we knew it, we were already looking at the lake and how the sun rays sparkled on the water. If you stayed quiet, you could hear the ducks quack and swim around. We took the opportunity of being there super early to explore before it started to get crowded. The main area was covered by oversized games, such as chess and jenga. We decided to try our luck and play. We successfully stacked all the jenga pieces on top of each other and started to play. Thanks to Galia’s awesome jenga skills, I was almost knocked out.
A little past 1:00PM, we decided it was time to eat something. I wanted to have one last meal in case Mother Nature decided to come after me again. We went up to the café area, where a young woman brought us water and handed us the menus. We started looking at our options and after twenty-five minutes of staring at the menu, we ordered our food. It took me a while to decide what I wanted to eat because I had to make sure that at least my salad or burger would not try to kill me as I tried to enjoy them. After all, revenge is the number one cause of murder. So, I got a steak salad, to which Galia made a weird face at, because “that bowl has too much green stuff in it.” Galia decided to get macaroni and cheese with freshly grilled corn. You would think we would be able to enjoy our meal without worrying about all the other things we might accidentally swallow. After taking a huge bite of my salad, I was about to take a sip of my water when I realized that there were tiny pieces of wood in the glass. I then reached for my Coke, only to find a fly stuck in it. At that moment, it became clear that Malibu Café was not the place for us. We paid the check and rushed out, praying that we would get home safely.
Even though our experience at Malibu Café was interrupted by nature’s jealousy, the food itself was great and the Café itself was beautiful. Malibu Café offers American food such as salads, burgers, and sandwiches. They are most famous for their Calamigos Chopped Salad, Steak Salad, Beyond Burger, and Blackened Avocado Chicken Sandwich. The café is also known for its breathtaking sights, oversized games, and, of course, the lake, which would be the ideal place for a family brunch, a girls’ night out, or even a romantic date.

"I would suggest to make sure to put aside all grudges against Mother Nature, because that woman will come after you."

Now it is time for you to experience Malibu Café for yourself. Make sure to try the juicy burger and the buttery corn, but watch out for flies who love free Coke. ​ 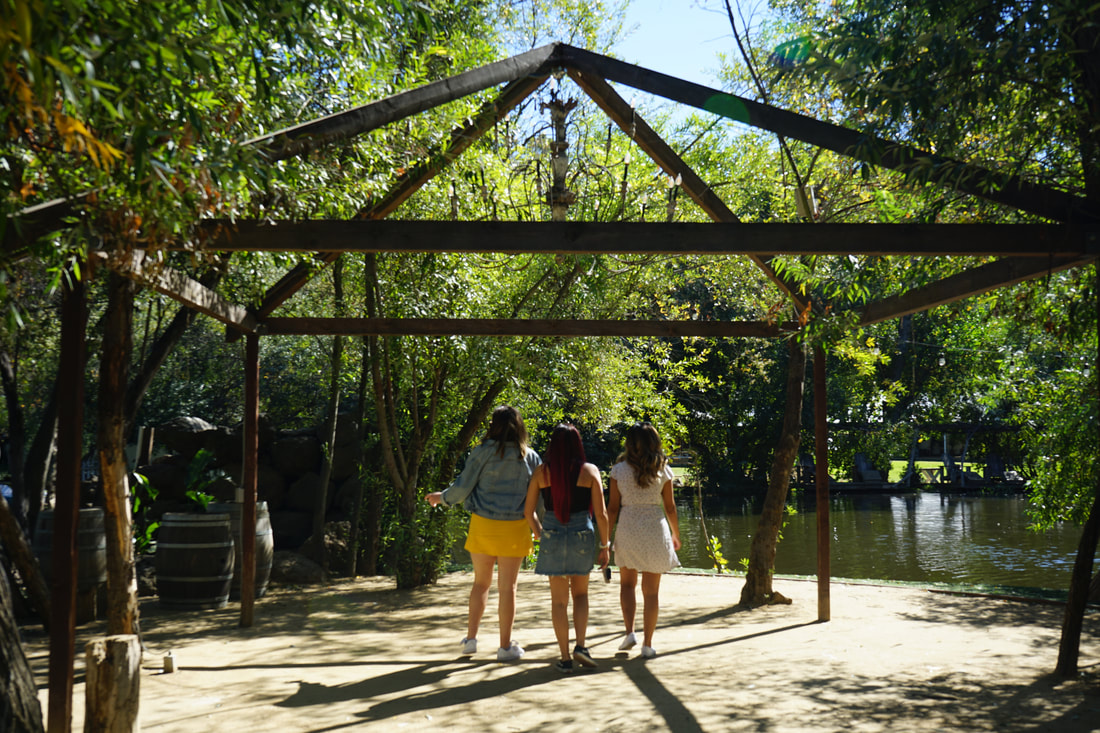 Atmosphere (5/5): Awe-inspiring dining experience. Instantly evoking curiosity in every person who has never been to Malibu Café. The backyard feeling automatically welcomes guests in.

Price $$-$$$: Moderately-to-expensively priced. A fulfilling meal would cost up to about $30.

Convenience (3/5): Difficult to get to if you’re not familiar with Canyon Road. Guests can easily miss the entrance to the café due to it being located directly after a sharp right up the mountain. Furthermore, regardless where you are coming from, there will always be traffic.