Written by Solomon Carreiro
​Photos by Solomon Carreiro & Amanda Way
“I was able to visualize on paper.” Mark stated about his childhood. His father, prolific photographer Douglas Kirkland, wanted him to think about jobs and careers even at a young age. “Talking to my dad made me realize that every object around me, somebody at one time drew it. Like that fan on the floor, somebody drew that.” Mark realized he wanted a job drawing, and he knew if he got a job he loved, it would involve drawing.

"Talking to my dad made me realize that every object around me, somebody at one time drew it. Like that fan on the floor, somebody drew that."

He assisted his father on different sets of documentaries and behind the scenes of big budget films. His father was very encouraging of him exploring his talents and bought him a super 8 camera when he was thirteen. This camera started his career in animation and live action. His father recognized a creative talent and wanted to cultivate it.

"You are teaching constantly because you are having to explain to a crew member what it is you want, sometimes how to do it, especially if you have new people.​"

At younger ages, people would ask me “Do you want to teach?” I would say: “Not until I'm older.”  I was too busy, that was the other thing, but I always thought I would be most valuable later, after I had decades in the industry.

On the job you do a lot of things intuitively, you've learned how to do it and you just do it. Teaching makes you step back and say: "What am I doing here and how do I explain it to some else?" The very act of directing in animation, you are teaching constantly because you are having to explain to a crew member what it is you want, sometimes how to do it, especially if you have new people.
​
There are ebbs and flows to production where it seems like there are not many shows being done, it's very competitive and it's hard to get a job, the best people have trouble during those times. There's a time where there's a whole bunch of people that want shows, and they're hiring a lot of people, and you are fighting to train people. When those times happen, you are training a lot of people. I was always helping staff members with how to do a layout, how to compose a picture, how to draw a figure, helping with film grammar or story structure.  I was doing that on the job, so to start doing it at Woodbury, it wasn't too strange, or unfamiliar.
Did you always want to teach?
​I’ve always wanted to teach, the teachers I had made the difference in being able to have my career, and I recognize now especially, you don't teach for the love of money, you do it for another reason. The teachers that really made the difference to me were the people who had long careers, they were teaching stuff that they had learned in their careers to help me have my career. 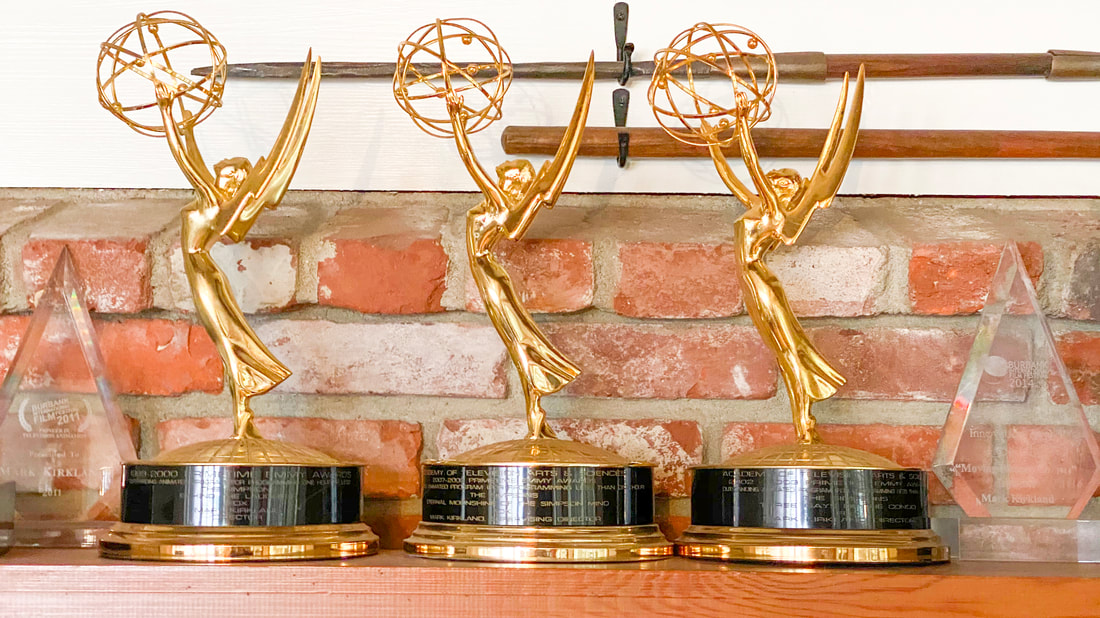 Some of the awards from the Burbank Film Festival for his live action films and Emmys for The Simpsons
How did you get involved at Woodbury?
Through Sue Kroyer, she and Eddie Rosas both recommended me to Angela Diamos (Co-Chair of the Animation Department). Angela and I had met at CalArts in 1974 when we were taking art classes together. I had a meeting with her and I brought a bunch of projects, sketch books, and portfolios to show her, and she said you would be perfect.  There is a big push now in schools  to teach more storyboarding because that's the entry level job in animation today. Every company, every animation needs storyboarding.
What are you working on now?
I am now working on personal projects, I'm going to be teaching more from this point on. It looks like I'm lined up to be teaching figure drawing to the animation workshop at UCLA. I taught a cinema class workshop, a master series class last year and Glenn Vilppu, anesteemed figure drawing instructor to our industry, saw me in class and mentioned that he would be retiring from UCLA.

Glenn said to me, “You have been doing this for a long time and you would have a point of view that would be valuable to the students”. I shadowed Glenn in his class, took some classes, met his class and sort of just been taking over his class. If everything goes smooth, I'll also be teaching the animation figure students in the fall.
We study a lot of things in storyboarding besides just drawing a storyboard.  We study cinema, film grammer, story structure, like how do you put a story together? We would watch Charlie Chaplan movies and analyze it, diagram how this story is put together. I hope to be teaching for a long time. ​

"There is a big push now in schools to teach more storyboarding because that's the entry level job in animation today.​ Every company, every animation needs storyboarding."

In my personal art, I'm taking painting and drawing, and I want to do fine art for myself. I am lucky to have met and befriended Olie Johnston, the last of Disney’s Nine Old Men. I visited him frequently and did a photo story about him. I also saw his interests, which included his backyard trains. Walt Disney visited him and rode the train and that got Walt interested in it, which got Walt thinking in three dimensions, and that led to his theme parks. Olie continued drawing and painting on the side and then he got into the trains. His wife said to me, "Olie isn't the kinda guy who comes home at the end of the day and just shuts his mind off, he's got to do something." It probably saved his marriage because he came home interested in things.
Why do you collect antique cameras?
They're toys, but they are important, I restore them and some day they will move onto another collection. I'll sell them, I'll donate them. But for now I enjoy them, the way Ollie enjoyed his trains. You know, Ollie’s trains that he collected were older trains, trains from his youth. They were history and so I feel that way about the cameras.
Mark is someone that that has accomplished so much and is so very humble about it. I admire his dedication to improving his skills as an artist. He has inspired me to not only try to grow as an artist but to be the best version of myself. I look forward to seeing his next film project he is working on, featuring his father Douglas Kirkland. I feel incredibly lucky in having met Mark and Letty. They are both so friendly and I thank them for welcoming me into their home for this interview.

"The teachers I had made the difference in being able to have my career."

Update: Mark has accepted a position with Bento Box Animation Studio! Although he will not be returning to teach, he will be returning as a guest speaker. Leslie Park will continue teaching storyboarding and will also be taking on a role working with Mark at the studio. He does enjoy teaching and will hopefully be back someday.