The Artist Warrior: Mear One

Written by Johnathon Harter
Mear One is an artistic visionary looking to fight the troubled world with his paintbrush and palette at his side. Using his variety of street art such as graffiti, painting, and sculpting as his way to communicate ideas, he hopes to influence the world’s view on our government and manipulated society. Los Angeles is his heart, art is his soul, and he is painting a new path that the world should follow. Mear One plans to push his ideals and movements through his new book, The War on Art, hoping to change the world one step at a time.

As I sit in this nicely decorated room with an orange glow of light above me, I inspect this visually appealing manual that holds the answers to the world’s biggest problems. I flip it around and thoroughly investigate it. I look in the back where the barcode is supposed to be and instead find “F*ck a Barcode” in its place. A smile appears on my face as I become aware of the free-spirited author that I am about to read from.
​
Flipping from page to page, slowly learning the message of Mear One, I realize that he is a man of depth with many layers, but he is so transparent that it makes it easy to get to the center of his motives. Mear One had a fast-paced and free-spirited beginning, starting in the 70’s, running through the street, taking every opportunity to do graffiti art. He was fighting the war even before the 1992 LA riots. From his beginnings, and until today, Mear One describes graffiti art as a kind of “don’t give a f*ck” attitude that cuts through the corporate robotic bullshit. This speaks to me because I myself believe that everything today is corrupted in media and Mear One serves as the speaker of truth for the city of LA.
​

"Graffiti is the voice of the dissatisfied soul and we made sure it was heard."

"Art is about exposing ideas that society has trained us to be turned away from."

The deeper I go into this scripture, it slowly goes from art being the victim of manipulation to the population as a whole. This book doesn’t just refer to art, but the way our entire society chains itself down and allows it to be controlled by the corrupt monopolizing government. I then realize that Mear One's message isn’t just for the artists, but for people of all walks of life.

"Wars are being fought allowing a small percentage of the elite population to continue playing their game of monopoly on the back of humanity." 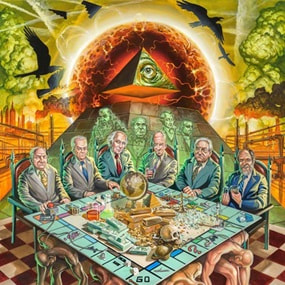 Photo Credit: Mear One
As I enter the final page of The War on Art, I am met with many emotions: curiosity, inspiration, understanding, and hope. This book, unlike some others, isn’t restricted and edited by the chained members of society and is completely truthful. Mear One is what it truly means to be an artist. He understands that expression and connecting with others is what art is meant to be. Spreading ideas, beliefs, and emotions is what makes art so valuable. The War on Art brings up so many issues with our society today, but it doesn’t mean that it is hopeless. Mear One sees the potential in humans throughout history as far back as 10,900 BCE. People can take a lot from this book and Mear One's ideals. Society is at a point where change is something that can come only if they allow it. We can be free and live life the way it is intended to be and Mear One’s art serves as masterpieces that the world can learn from.

"Freedom for humanity has been a quest of mine." 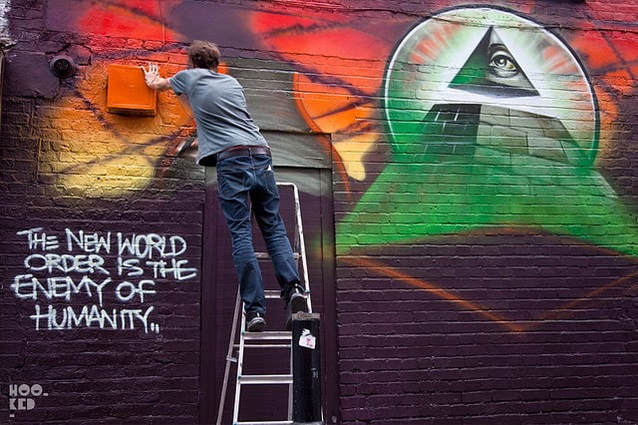 Photo Credit: Mear One
A few weeks after reading this book, I began to become more curious by the day about his beginnings, his primary goals he wants to achieve, and the reasoning as to why he chooses to use art as his message. Through Mike Sonksen, a close friend of Mear One, I was able to get his email. As I sit at my desk with my shaking hands, I began to type out some questions, knowing that they would be seen by the artistic warrior himself. After a few days, I hear a bing in my pocket and see an email notification from Mear One. I began to feel the excitement rise up as I open my email and read the answers written by Mear One.

​​
​Why do you choose art to evoke change?
I chose art as my tool of communication because it transcends language. All of humanity can read art and so that helped me to discover my unique way of speaking through it.

Tell me about your artistic process and the steps you take to create your pieces.
My artistic process starts from my interest. I am deeply fascinated in science, history, revolution, philosophy, spiritual realization, and nature. In these complexities I find my work waiting to be chiseled out.

What do you want to change the most?
I want to change myself. If I can be a better person than maybe everyone can too. I’ve made a lot of mistakes and they have allowed me to see the other side. I’m grateful but aware how close I’ve come to irreversible moments that I couldn’t have fixed. If I can inspire anyone else to change, I would introduce them to what it is we are unconsciously doing to the world and how nature is all we really have. Real change will take a mass consensus of conscious objectors who see the future and are ready to go there now.
​
Why do you choose Los Angeles to be your canvas?
I grew up in Hollywood in the 1970's and running these streets from such an early age permanently stamped this city into my being. In the late 80’s and 90’s, I spent a lot of time doing graffiti from the freeways and rooftops to allies of Melrose and train yards in the valley. The city has been a treasure chest of fun for me and as I have become a painter, sculptor, writer, whatever. I’m in allegiance with this city. We have rolled together through some crazy times and it seems like it’s still rolling. I love LA, it feels like Mad Max, Blade Runner, and The Matrix, somehow insanely directed by David Lynch. See you in traffic.

"The city has been a treasure chest of fun for me and as I have become a painter, sculptor, writer, whatever. I’m in allegiance with this city."