Written and ​Photographed
​by Johnathon Harter 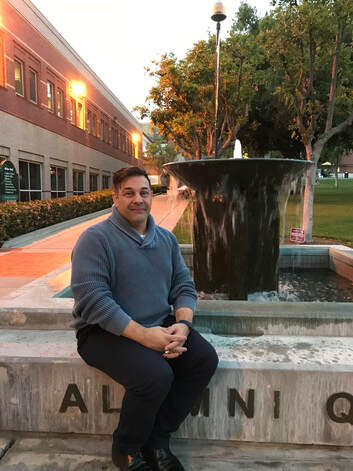 Having previously been interested in the film industry, Michael Annetta decided that it was time for him to take part in interactive media due to his passion for storytelling. I first met Michael when he came into Woodbury as a panelist for a storytelling class I was taking. He provided excellent advice on how to improve my story and was already showing signs of a great game design professor.

Soon after our encounter, one of my old professors Bryan Jaycox, intrigued Michael with a potential teaching position. As time went by It was announced that he would be teaching at Woodbury. This was a great sign that the game design program was advancing. Michael has great experience in the industry regarding production and what it takes to get a game delivered on time and that is what made him the perfect candidate for my senior thesis. There are so many aspects of game production and due to his experience he was able to help push us in every aspect of the process.
​
We might be small here at Woodbury but, it’s not the quantity, it’s the quality. Michal Annetta has impacted the game department students with his extensive knowledge and helping push ourselves to unlock our full potential. With new professors emerging, the Woodbury game department is on a rocket ship to success and Michael Annetta has served as the thrusters to help push us into the next level of the stratosphere.
What are some projects and experiences that you’ve been a part of being in the games industry?
I’ve worked with, among others, WEVR (designer on the Proto Award-winning Samsung GearVR Launch title, theBluVR), Walt Disney Imagineering, Flying Mollusk (executive producer and VR lead for Nevermind), MatterVR's Wonders of the World (Lead Experience Designer), The Annenberg Innovation Lab, The Alchemists, and Guillermo del Toro’s Mirada Studios. I’m currently working at Sony Pictures Entertainment as a Designer and Producer for voice-enable games for smart speakers like Amazon’s Alexa. I’m the production lead for Jeopardy! and Who Wants to Be a Millionaire for Alexa, in addition to working on several other as-yet-unannounced projects.

What do you find to be the most difficult in your field?
Like any creative field, there are more people looking for employment than there are jobs available. I consider myself very lucky that I’ve not only worked on some wonderful and innovative projects, but I’ve also worked with some amazing and wonderful people and companies as well.

What advice would you give to someone who is interested in pursuing a similar field?
Several things: Learn to program, even if you never intend to work as a programmer. The ability to think logically and lay out a game (or game process) in pseudocode helps set up a game's processes and can lead to better team communication (and if you're working alone, it allows you to prototype quickly, always a valuable skill). I continually keep learning how to program in various languages, even though my day-to-day job doesn't really require me to write code. It helps in the way I think.
​
On the other end of the spectrum, game makers should think outside of games. There's a great old Extra Credits video on getting started with making games that begins with a question, "What should you learn if you want to be a game designer?" and the answer is "Everything." What they mean is not that you need to know everything about game creation, but that you need to have life experiences outside of games. Games made by people who only know about other games tend to be repetitive and self-referential and that's not ever going to lead to innovative or interesting games. Play sports, play an instrument, read comics, see movies, watch theatre, see an opera (no, really), start hiking, take an improv class, learn to cook, make crafts, garden, interview older people, skateboard, etc. The idea is that the most innovative thinking in games comes not from looking at other games but from looking at arts and activities outside of games and broadening your thinking about how games work (or how things might work as a game that work differently in other media or in real life).

​Don’t be a jerk (though usually I use much stronger language). Like most of entertainment, games is a very small community. Reputation matters and the person you might be a jerk to today may be someone who could hire you in six months. The attitude of some online game fans (who like to rail against individuals and companies) doesn’t translate well to being a game professional.

"Like most of entertainment, games is a very small community. Reputation matters and the person you might be a jerk to today may be someone who could hire you in six months. The attitude of some online game fans (who like to rail against individuals and companies) doesn’t translate well to being a game professional."

What do you strive to change or impact in your field?
Games lack all kinds of diversity. As an industry, it is too male, too white, too straight, and too obsessed with youth. I strive to get as much diversity in the industry as I can, from all vectors. Games will only get better when we have a diverse set of storytellers behind them.

What bothers you the most about the state of the games industry today?
There are several things, but I think the thing that bothers me most is the lack of stability for the workers of the industry (the designers, the engineers, the artists, etc.) Layoffs are common and game developers tend to move from project to project, studio to studio. This not only deters any stability in the sense of building a sustainable career, but it also negatively impacts the industry as a whole because we then tend to deemphasize expertise and longevity. This shifts the workforce of the games industry to young, inexperienced people who haven’t learned from common mistakes. It also means that people “age out” of the industry, which is high problematic as the audience for games (all games) is incredibly broad.

What are some changes you would like you see in the games industry within the next 10 years?
There’s currently a movement in the industry to organize labor, either through unions or professional guilds. Within the next decade, I’d love to see the games industry follow in the path of the rest of the entertainment industry and create some sort of organized workforce that can collectively bargain for standardized pay, insurance benefits, and work-life balance.

What got you into Indiecade, and what specifically have you been involved in?
I have been involved with Indiecade as a volunteer, a judge, a speaker, and a presenter. I initially got involved when I was still in school as a volunteer (IndieCade, though sometimes referred to as the “Sundance of Indie Games,” is still a nonprofit organization that requires a lot of volunteer workers to run). I first volunteered at IndieCade “Prime” (the original, West Coast based festival) over the course of several years. Later on, I was asked by the organizers if I would be a judge for the festival (again, these are volunteer positions). In more recent years, I’ve presented games at IndieCade and, at IndieCade 2018, I spoke about organizing a geographically dispersed development team to revive what once seemed to be a discarded game project.
​
What are some tips you would give to somebody pursuing career as an indie developer?
​Don’t quit your day job! Seriously, indie development, especially for someone without a serious portfolio of shipped titles, is potentially creatively and artistically fulfilling, but not usually financially fulfilling. Project planning skills (or someone on the team with very good project planning skills) are essential because the margins of operation are very tight. If you can, start development on nights and weekends (not unlike every startup “garage band”) to build a solid prototype of the game before you seek some sort of funding. There are several sources available, ranging from crowdfunding to angel investment to publishing deals, but they are all challenging in their own ways and each source might not be appropriate for each project or team. If I had one piece of overarching advice for indie developers it would be to approach development on your game as a sustainable business, not just as a one-off project.

"If I had one piece of overarching advice for indie developers it would be to approach development on your game as a sustainable business, not just as a one-off project."