A Little Bit of Micro-Wrestling, A Whole Lot of Passion

​Written and Photographed by Brody Angeles 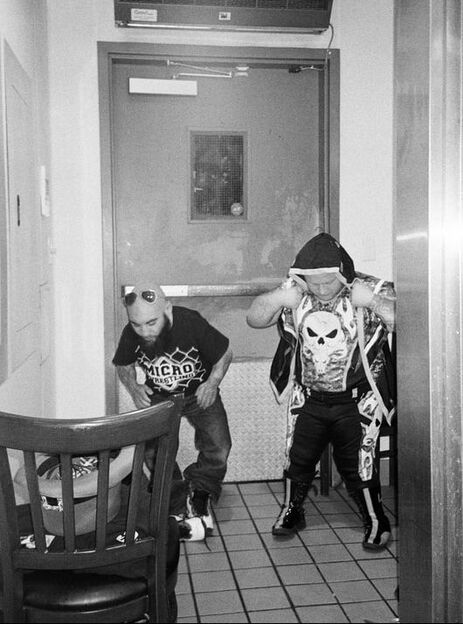 Lil Show (on right) gearing up for the match.
​On the two hour drive to Riverside, excitement filled my body as my crew and I drove to film wrestlers for a documentary that I had always wanted to make about professional wrestling. After having numerous conversations with “Lil Show the Redneck Brawler” through social media, I imagined meeting a wrestling superstar who would have many stories to tell. And I had thought that I had found the perfect subject for a documentary. So we arrived at the Tilted Kilt, a franchise bar and restaurant, where the night’s main event would take place, and as we stepped out of the car and prepped our gear, I messaged Lil Show (his real name unknown) that we were outside. We stood in front of the restaurant waiting for the big muscular WWE superstar to come out- Now before I reveal something major, I must give some context.

I was in a panic that I would not find a luchador in time for the shoot, so my crew and I messaged 30-50 luchadors asking if they would like to be apart of the project. So when Lil Show got back to me, I was so excited about someone willing to join, that I never bothered to look at his profile, or to look at photos of other than his profile picture.  However, it was accidentally the greatest thing I had ever done.

Lil Show, so it turns out, is a micro-wrestler who has made a name for himself on many platforms such WWE wrestling, and now Micro-Wrestling. He comes from Tennessee and has a lovely wife and kids back home. 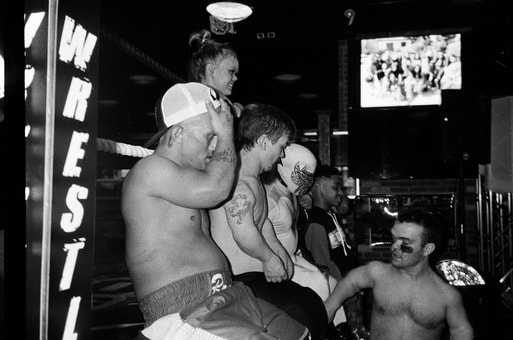 The Micro-Wrestlers getting a breath of air after the show.
​​After we got ready to film and started conducting interviews, I watched Lil Show practice and noticed something beautiful. I noticed that these guys really love what they are doing, and they don’t care what you think about them.

They are living their dream and they are doing the best they can to make a show for themselves. Even in front of 30 people, they put on a show as if they were selling out Madison Square Garden. It was inspiring to me.

“Lil Show the Redneck Brawler” aimed to fight like the next Triple H or Undertaker despite his size. Lil Show had more tenacity and dedication to his art than anybody I have ever met.

Lil Show is on the road every month of every year. He gets chairs to the head every night, crashes through tables every night, and bleeds every night. He may be a “micro-wrestler”, but d*mn does he fight like any other wrestler would. 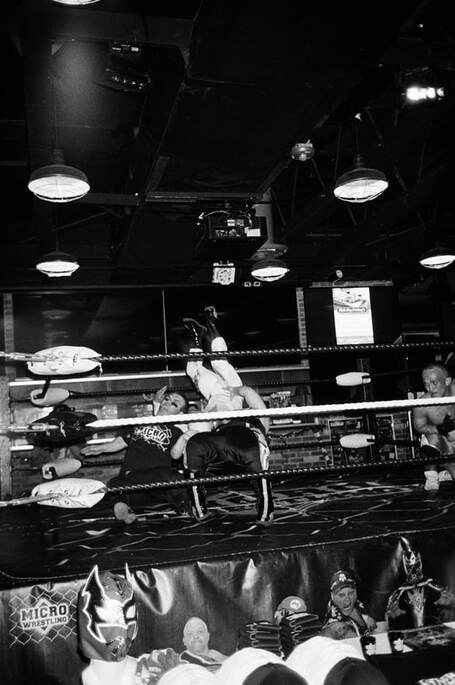 I still couldn’t wrap my head around just how dedicated someone could be to a sport that does so much damage to one’s body. Micro-Wrestling is a very small wrestling federation that is being independently run by one person. They play small venues on weekdays, and on a lucky day they sell out a warehouse. So why stay? Why the dedication?

“The doctors told me I would need to stop wrestling soon and I said you could say that til you're blue in the face - I ain’t quitting. This is my life, wrestling is my life.” ​ 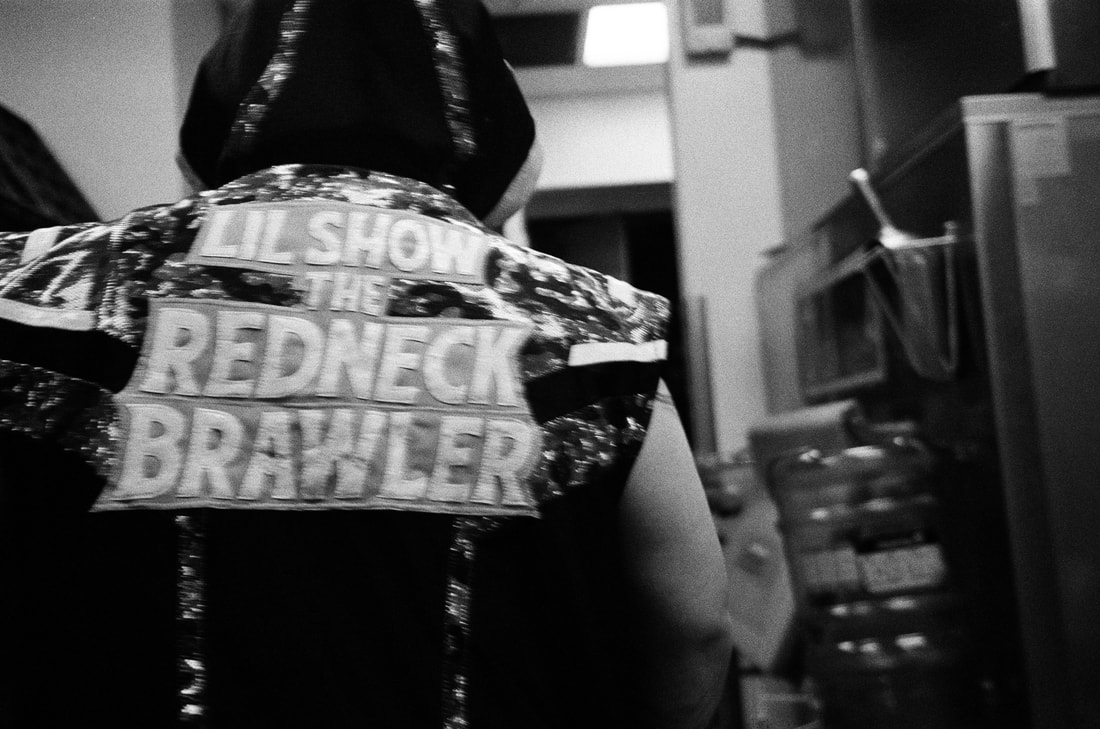 As Lil Show said this sentence, he stared at me long and there was a silence that filled the room. It was at this point during the interview that I had realized that this isn’t about being in the ring or the attention. Lil Show doesn’t just travel around the country performing in bars and warehouses because he wants to make it or entertain audiences. He does this because he’s found his one true love, which is wrestling!

After getting to know him more throughout the day, it was evidently clear that here is a man who loves what he does so much he is willing to do anything he can to be in that ring and give it all he has. He doesn’t do it for the money, he does it because it is what he grew up fantasizing about. It’s what he dreamed of doing, and at the end of the day, if he’s just performing in Tilted Kilts, he’s going to be happy no matter what as long as Lil Show gets to do the one thing he loves more than anything in this entire planet, to wrestle.  If that isn’t some inspiration... I don’t know what is!

As we filmed the guys fight and practice, I felt this warmth. It was like I was with a family hanging out, just having fun. They didn’t see wrestling as a sport, or as entertainment, they saw this as a form of art. They plan on doing this until they absolutely can't. They are unapologetically themselves. Don’t let their height deceive you because these guys are in it to win it, they are the most dedicated, fun, respectful, and loving people I have ever met.
​ 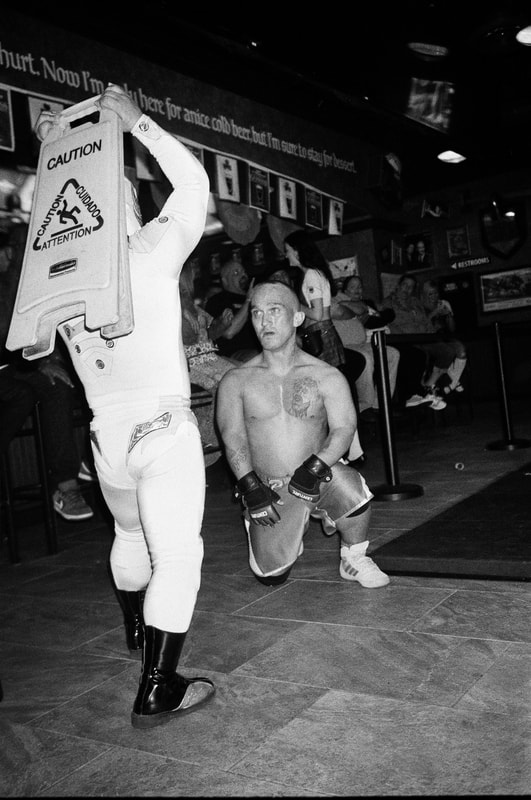