​What’s your favorite way to eat an Oreo? Do you twist, lick and dunk or just bite into all of its crunchy glory? For me, the only option is to stick a fork in the cream, soak the cookie in a glass of milk then enjoy. Not only is there a variety of ways to eat this beloved snack, there are plenty of flavors to choose from as well.

I can’t call myself an expert, but I’m definitely a fanatic. Oreos have been my go-to snack since my childhood. It’s what I left for Santa - rather than the plain old chocolate chip! It was my nickname in highschool and I even gave an informative speech about it in college.

It wasn’t until recently that I branched out from my double stuf or mini preferences. While shopping at Target, I noticed a package of white Oreos, labeled as a “mystery flavor.” I grabbed it in hopes of winning $50,000 for guessing the right flavor, but after a quick scroll through social media, it seemed like everyone agreed that it tasted like Fruity Pebbles.

During that same trip at Target, I discovered 11 other flavors … yes ELEVEN! I’ve always been hesitant to try their “Limited Edition” ones because a) what if I like it then it’s gone forever and b) what if it’s disgusting and I just wasted my money to find that out? I’ve been perfectly content with the plain old formula, until now. Below is a list of all the ones I got my hands on and my thoughts on each of them. I even have a cup of Oreo hot cocoa mix to go along with it - which tastes like warm chocolate milk with soggy Oreo pieces in it, but we’ll move on … 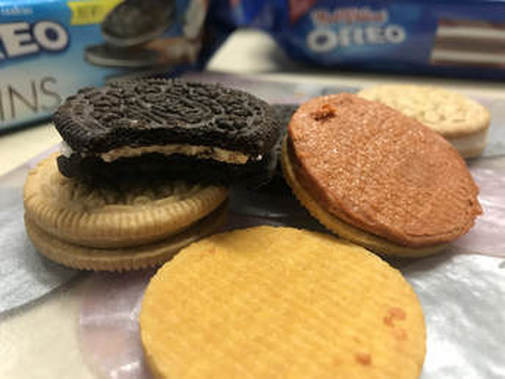 ​Salted Caramel
I’m a fan of the golden cookie and am slowly adjusting to the thinner ones. I knew this would be a great combo because I’m a sucker for anything salted caramel. No saltiness at all and just enough sweetness to satisfy a slight craving. Let’s just say I wish it was a thin cookie, with double the stuffing.

Hot Cocoa
I was NOT expecting this to be so good!!! I can’t tell if they simply took the original filling and chocolate filling and put it between the chocolate wafers, but it’s a delicious combo. The white filling tastes slightly marshmallow-y so I think that might be the kick there. Super sweet, but it’s perfect with milk.

Pumpkin Spice
Not gunna lie, I almost fainted from the scent itself. I refuse to cave into the pumpkin spice craze every fall and I kinda wish I didn’t go for this one. I was veryyyy scared to try this, but pleasantly surprised. It tastes like pumpkin pie y’all! I could barely finish a whole cookie, but it wasn’t the worst ...

Cinnamon Bun
I think I was over the cinammon by the time I got to this one, but boy is it overpowering … cinnamon cookie? No thanks. It has a super strong artificial aftertaste and I couldn’t wash it out for a while. I’m going to stop there because I never want to think about or try this one again.

Coconut
Another thin cookie, which I actually appreciated with this flavor because I don’t see myself reaching for coconut anything, ever. You get a good whiff of the chocolate wafer more than you do of the filling open lifting the tab of the packaging, so I wasn’t turned off by that. I just didn’t like the consistency of the filling for some reason. Taste-wise, it was mostly vanilla to me with a hint of coconut - refreshing, but muted.

Update: the longer I had the package open, the more I could smell the coconut.

Apple Pie
You can use this as an air freshener, or to trick your friends into thinking you actually baked an apple pie then just hand them a plate of Oreos. Good call with the graham wafer, Nabisco, and the filling is spot on! There is definitely hints of cinnamon, but it works very well considering it's one ingredient that could make or break an actual pie. Of all of them so far, this was the closest to the actual food flavor they were aiming for. 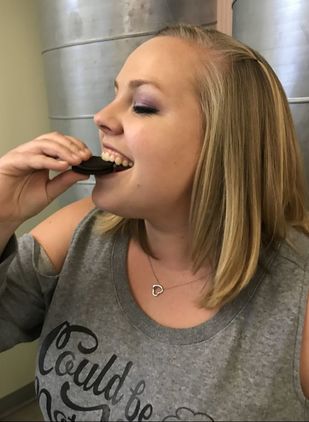 Taylor Kowalczyk tries a Hot Cocoa Oreo.
S’mores
Another chocolate/vanilla filling mashup and graham cookie. I guess this is their new thing … but it’s good, really good here. I don’t feel the need to roast marshmallows or rip open a Hershey’s bar just to get my fix anymore - I can eat one of these Oreos and go on my way.

Red Velvet
Right off the bat, this had me SHOOK! Not a chocolate, graham or golden cookie … but a red velvet one??? Also, the cream cheese was going to be a hit or miss and they sadly missed. I can’t even explain what the filling tastes like, but it’s NOT cream cheese. Oddly enough, I could smell the sourness of it. It actually smelled like a red velvet cake, but didn’t quite taste like one. I enjoyed the cookie, though. I always argue that red velvet is just red chocolate batter - it essentially is - but this red batter has a richer taste that doesn’t compare to the original chocolate cookie. I really, really wanted to like this one!

Dunkin Donuts Mocha
If you know me (and my Starbucks order) you know I like my coffee cold and sweet which is why I looked forward to this flavor as it combined my favorite breakfast essentials. I’m pretty sure just one of these cookies is capable of keeping me up all day. There is a perfect balance of caffeine and the wafer does its job of enhancing the flavor.

Cookie Butter
Ugh, more cinnamon and graham cookies … as one of the few people on this planet who doesn’t reach for cookie butter during every trip to Trader Joe’s, I wasn’t sure how I would react to this one. I cringed a little, but it was with good reason. The filling was chunky, you could see (what looked like) ground cookies in there and it was a bit much. I didn’t like the texture as a spread and I don’t like it as Oreo filling.

Mystery Oreo
As mentioned before, this is basically a Fruity Pebbles cookie sandwich. Weird, because it’s a chocolate wafer and white filling, but you’re smacked in the face with fruitiness the second you open this bad boy. My jaw literally dropped because I stuck my face in a box of the cereal just to prove that they’re literally the exact. same. smell. If you just eat the filling it tastes like the milk left after eating the cereal. Anyways, I’m going to submit my guess to Nabisco in case they decide to split the winnings with all the other 300 million people who already guessed this.

In conclusion, @Nabisco just give me all the double (or mega) stuf Oreos in the world and I’ll be happy. Also, bring back Cakesters, those were life changing - Starbucks has a dupe, but it’s just not the same. Give these a try for yourselves and let me know what you think!