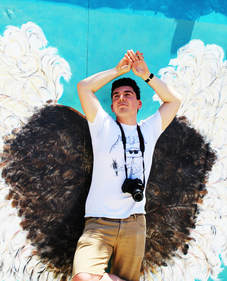 Brandon confronts ostriches
The following is a true story told by two people facing their fears.  The first person is Brandon, a student at Woodbury University, who has been diagnosed with an incurable form of Ostrich-phobia.  Okay, that’s not a real thing… but he is scared to death of ostriches. Ornithophobia is the proper name of his undiagnosed fear of birds (specifically ostriches).  Mel, on the other hand,  is also a student at Woodbury who has an irrational fear of dead fish. She’s been diagnosed by friends as having a bad case of ichthyophobia, which actually is a fear of fish (both living and dead).  As you now know, the names of the innocent have not been changed because identities aren’t worth protecting.  Both Brandon and Mel were challenged by each other to visit a place in Southern California to face their fears.  Since no dual Ostrich & Dead Fish farms exists, we first visited an ostrich and emu farm in Solvang, CA called Ostrich Land. Afterwards, we visited Santa Barbara Fish Market.  No animals were harmed, well… except for the fish (but that was before we arrived)…
​This is: Ostrich vs. Dead Fish! 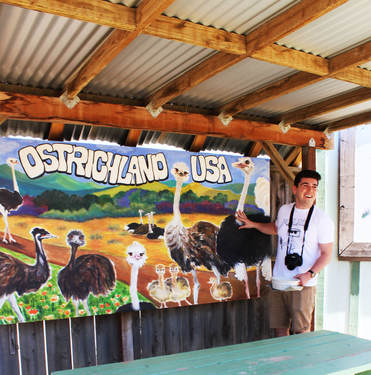 Brandon: EIGHT...TEEN…YEARS…That was how long it had been since my last close encounter with my greatest fear.  I was a little boy in Mexico playing with myself at the beach. Meaning I was playing with sand and making little castles… with myself.  My parents were sunbathing forgetting they had a little squirt to watch. I wandered off by myself, as a dumb kid does, and walked into a wall… well, it was really a tall gate. No, I did not walk far enough to the border, but I did walk to a little farm on the beach where a guy was raising these tall, big, clumsy, scary, raptor-looking creatures… OSTRICHES. I had never seen one in person before, and one of them charged at the gate, hitting it causing me to fall backward! I then looked directly at it as it is moving it’s terrifying neck around, staring at me with it’s big ol’ eyes as it towered over me. As I wept in fear, my Dad came running and picked me up. I was scarred and traumatized by this encounter. Every time I see one at the zoo, my palms sweat into a waterslide. Whenever I see a picture of one, I get nervous. I am terrified of these mean species and the last thing I wanted to do was drive two hours out to go to a farm filled with them.  But, nothing ventured... Nothing gained.

​Mel: I woke up feeling excited and optimistic about the day ahead of me. I have to admit I was a little naive thinking a day full of facing fears would be a good time. I woke up, did my normal routine and headed to campus where 5 hours of sitting in a car with two strangers lay ahead of me. We all jumped in and before I knew it, we were lost in conversation, enjoying the views and music all around us.

Brandon: It was time for me to face my fears with my new friends, Justin and Mel, as we traveled out past Santa Barbara to Ostrich Land USA.  Patriotism at its finest. Housing ostriches and emus, I was not aware of how many there were until we went in. It felt like there were more ostriches than students at Woodbury at the farm. I was shaking, I even dropped the cards out of my wallet while getting my ticket because I was so frightened of what was about to come. They gave us some bowls with handles to feed them with but we weren’t allowed to pet them… thank goodness! Each step I took a hint of piss went down my shorts as I got closer to the monsters.

Mel: After being distracted for what felt like ages, we arrived at what seemed to be an actual Angry Birds farm, also known as Ostrich Land. With legs cramping and sweat dripping down our necks, we all crawled out the car and looked forward to being outside. Brandon’s anxiety began to kick in as we saw how many ostriches were on this farm. Justin and I looked and laughed together, completely oblivious to what we were getting ourselves into. We walked in, paid our dues and felt a bit more relaxed after hearing all the employees casually talk about the ostriches. 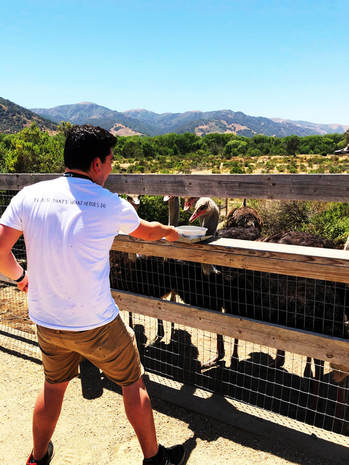 Brandon: I glared at the oddly happy folk who felt jolly and free as they fed the long-necked fiends and I questioned their jubilance. I hesitated to get close to them, but I knew I had a mission. Luckily the handle on the bowl was fairly long… and my arm was longer… as I extended it to the first dim-witted ostrich. The ostrich pounced hard at the bowl and kept going up and down, hitting it like a Whack-A-Mole! I screamed as another head came in and aggressively fought it’s way into the bowl. I had almost dropped it out of pure fear, but I took it like Jesus on the cross because I knew I had to STAND MY GROUND.  PLANT MYSELF LIKE A CACTUS...as more of these savages dug into the soon-to-be-empty bowl. As soon as there was nothing remaining, I took the bowl back in relief and took a nice, giant breath…

Mel: We were handed two bowls filled with pellets; shocked that we were going to be able to actually feed the ostriches, we anxiously approached the fences. Looking around us, we were instantly overwhelmed with kids screaming, birds cawing, and the sun beating on our skin. Describing this place as chaotic is an understatement. Determined to get this assignment done, Justin and I encouraged Brandon to feed a friendly-looking ostrich that approached us on the side. I watched the ostrich peck at the bowl and remember thinking “Why would anyone be afraid of these?” Looking through my lens, all I remember is Brandon’s smile turn into an a nervous frown as we were ambushed by what seemed to be a 100 ostriches, in all different shapes and sizes. The tall ones attacked the bowl in Brandon’s hand as the shorter ones pushed and shoved to fight for food.

​"The ostrich pounced hard at the bowl and kept going up and down, hitting it like a Whack-A-Mole!" 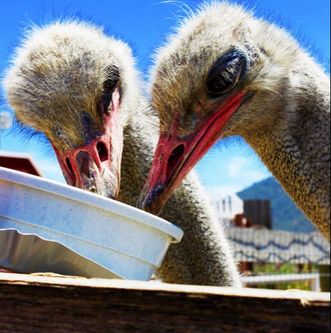 ​We jumped back and stood in shock as we realized how naive we were to have walked into this bird-filled hell. Brandon decided to give them a second chance and picked up the food bowl again. This time we walked towards an area of the fence that had a block in the middle for us to feed them. Thinking that this would keep the birds back a little, Brandon approached the opening. Again, we all jumped back after seeing all the ostriches weave their necks through the open bar and reach out towards our hands. Suddenly, we were surrounded by long necks and pitch-black eyes relentless to grab the pellets. After a few more jumps, about 100 more photos, and a million emus looking into our souls we decided that we were tired of this ostrich-madness and headed back to the car.

Brandon: My fear of encountering the devil birds was over and my friends, Mel and Justin, also developed a new fear of both the ostriches and the growling, red-eyed emus. Their growl sounds like thunder… from down under. I will never have to do that again…  for hopefully another EIGHT…TEEN…YEEEAAARSSSSSS…. 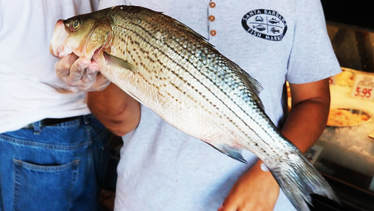 Mel: With an hour of driving ahead of us, I sat back and relaxed in Justin’s car as we made our way towards my biggest fear. I knew I wasn’t going to enjoy being surrounded by dead fish but I figured it wouldn’t be as hectic as the Angry Birds farm. We arrived at our destination and I instantly felt relieved to see that it was more of a small shop instead of the big, gross fish market I had imagined in my head.

​Brandon: After all of the commotion with the angry birds, it was nice to step back and relax for a bit in a place that I did not dread going to...The fish market!  As we made our encounter with the place, I thought it would be bigger. What was bigger than I thought was Mel’s dread as she saw the dead fish, crabs and shrimp on display for the hungry folk out there.   Mel told me if she were alone and stranded out in the ocean with a plate of fish, she would eat her own legs first. As I was filming, I was giggling with joy getting b-roll of Mel biting her nails. Don’t lie; everyone feels some happiness of the misfortune of others sometimes.  We had to get the shot and Mel really facing her fear, so I asked a sweet-looking young lady who was working there if she could hold a dead fish so our friend could touch. Shockingly, without hesitation, she said “sure!” And zipped to the kitchen to get us a fish corpse!
​
Justin and I giggled hysterically as the lady stepped closer to Mel as she was cornered from across the room!  I wanted to get the room to chant ”TOUCH IT, MEL! TOUCH IT, MEL! TOUCH IT, MEL!” But I was using my energy to get footage and capture this moment.  My laughing had slowly disappeared and I found my sympathy for a stranger who had become a friend that day. I thanked the woman for her patience of holding the little, dead rascal without Mel having touched it.  It was an odd day, an odd mission and an odd one I will never forget with new friends who I will never forget.

"In that moment I knew I would now be leaving with two fears: Dead Fish and Fish Mongers." 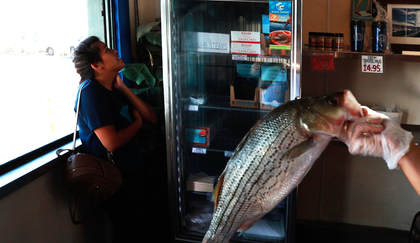 Mel hides from dead fish
Mel: We walked in and I forced myself to look around at all the different things this shop had to offer. At first it wasn’t bad, since we were only looking at basic sea food, but my anxiety began to grow when I saw all the fish that lay in front of me. With their heads lined up in rows, I felt I had seen enough and was ready to leave. However, Brandon and Justin had a different idea and suggested that I hold a fish. I looked over and felt positive the fish lady would say no considering how afraid I looked. Contrary to what I thought, the fish lady looked at me and grinned excitedly as she walked over to pick up one of the dead fish. I quickly let her know that I didn’t want to touch any fish, but she insisted I grab it. She inched closer and closer to me until I was practically cornered and held out the fish for me to touch. In that moment I knew I would now be leaving with two fears: Dead Fsh and Fish Mongers. Filled with anxiety, I moved towards the exit in an attempt to escape this stench-filled trap. Luckily, Justin and Brandon realized how overwhelmed I felt and let me off the hook with touching the fish. The evil fish lady backed off and I quickly grabbed my stuff to leave before she came at me with another one. The three of us walked to the car and laughed all the way home, talking about how silly we must have looked all day, trying to feed ostriches and running away from dead fish.