The Trial of the Brazilian BBQ:
​Pampas Grill

Written by Tuan Nguyen
Photos by Tuan Nguyen and Ali Al-Sulaiti
​
Where would you take a buddy who’s fasting for Ramadan? It probably wouldn’t be a place that has slabs of meat hanging openly with a bunch of side dishes just there to tease him as his willpower deteriorates with each groan of his angry stomach. It probably wouldn’t be a place where people stuff their gluttonous faces with a plate full of spaghetti, mashed potatoes and meats. But, if you were an evil prick like me, then this is exactly the perfect place to bring this person along just for the enjoyment of watching a friend suffer immensely. So that’s just what I did, and we went to Pampas Grill. 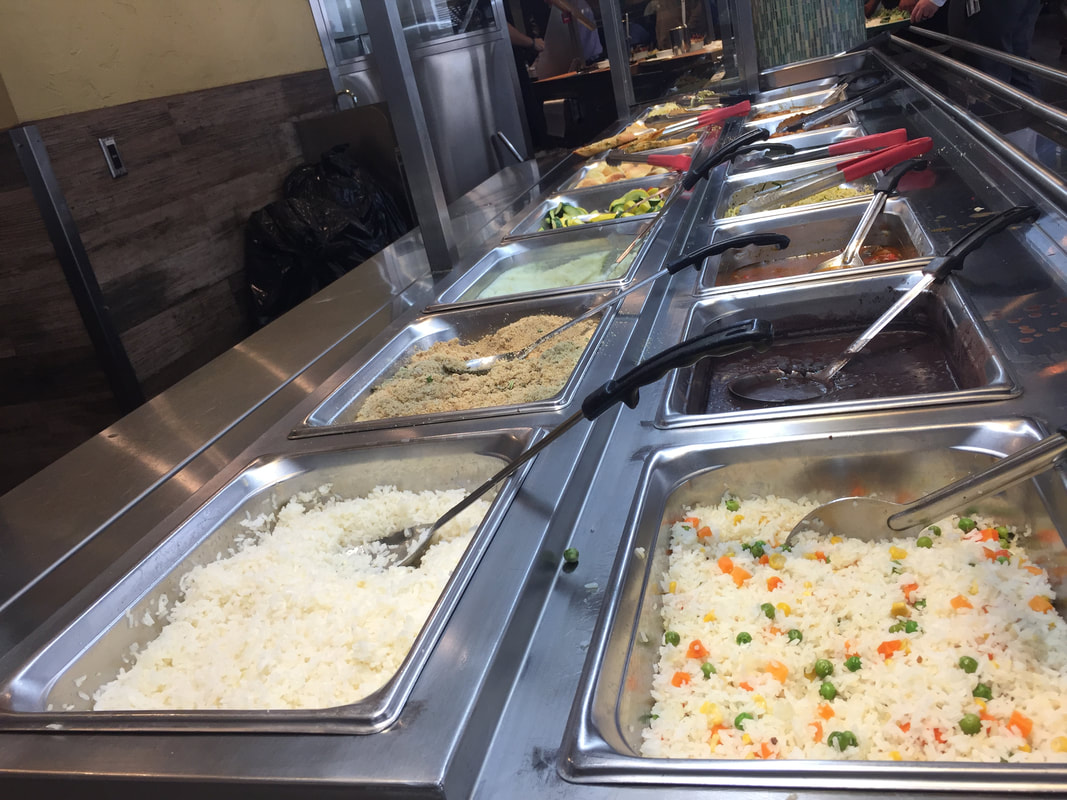 ​Pampas Grill is a Brazilian restaurant in downtown Burbank that offers an assortment of side dishes in a buffet style, and their meats grilled on an open flame on giant skewers. The selection was quite plentiful with Caesar salads, fried plantains, beets, mashed potatoes, garlic spaghetti, garlic rice and other dishes that actually looked surprisingly appealing under a sneeze guard.  Pampas has a good selection of meats with spicy chicken, tri-tip, top sirloin, pork sausage and lamb. I hear a light whimpering behind me as my buddy solemnly sits at a table, as I carefully consider what meat to get. Uncertain as to when I’ll have this opportunity again, I got all the meat that was available. It is unusually satisfying watching the cooks swiftly cut a hot piece of pink meat to be served onto your plate. With such a heavy looking meal, it would be remiss of me not to have a glass of wine to wash that down. “You really going to eat all that now?” My buddy asks me with quiet disgust as his stomach growls. Yes. Why, yes I am.​

“'You really going to eat all that now?' My buddy asks me with quiet disgust as his stomach growls. 'Yes. Why, yes I am.'" 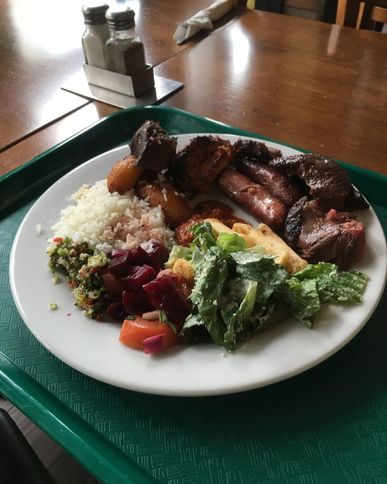 I suppose I can mention how the food that I was agonizing my buddy with tasted, which was quite good for the most part.  I’ll start with what didn’t work for me which was the tri-tip. It was tough and lacked much flavor outside the few specks of salt that was sprinkled on it. It was unfathomably chewy, and I eventually gave up dealing with this meat flavored bubblegum, although it did have the added insult of me wasting food in front of a person who’s starving as I question why he’s friends with me. All the other items were much more manageable and had great flavors and texture. The sausage had a crisp casing that had a great snap when I bit into it, followed by some juicy fat bursting from it. The top sirloin was perfectly pink with the right amount of chew and salt, which highlighted the meat’s natural flavor. As I blissfully stuff my face making sure to recognize all the nuance of flavors that run through my mouth, my buddy stares vacantly in envy and agony. “So, how’s your meal?” he asks in a puppyish whine. I take this cue to make sure I tell him about the smoky flavors that penetrate the flesh from its own fat dripping on the open flame of the grill. It was very much sublime and at that moment I may have seen a single tear drop from his face. Lastly, I enjoyed the spicy chicken which was the boldest in terms of spices and flavors, combining garlic, chili, salt and paprika that complimented the natural flavors from the chicken.

"It was very much sublime and at that moment I may have seen a single tear drop from his face." 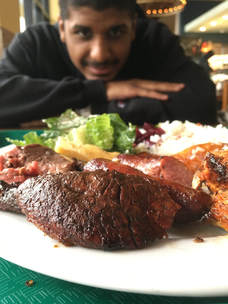 I felt like a tyrant swirling a glass of wine before noon on a Tuesday and it certainly looked that way as he continued to sheepishly look at my food like a broken-down puppy. A cruel smirk shot across my face with each hedonistic bite I took, even my plate was something of a sin, mixing meats from four different kinds of animals like some kind of monster. Despite all my attempts of light torture, my buddy took it in stride much to my chagrin. His happy disposition did not deteriorate, and I was actually amazed by his overall composure and discipline. “Maybe there’s something to fasting that really does focus one’s energy in a positive way,” I thought as I chewed on one delicious piece of meat after another. “Maybe by taking all the distractions that bombard our minds away, we can focus on what’s really important,” I thought as I swirled Cabernet in my hand, sipping on the alcohol before midday. “Perhaps we can be better people if we just took the time to appreciate everything that we currently have and see how lucky it is to be here,” I thought as I unbuckled the top button from my pants once my stomach expanded and I continue to eat even passed the point of it even being enjoyable any more.

"I learned much about this man and I believe his fasting was central in him focusing his attention away from food and into people."

Needless to say, my attempt at unwarranted cruelty didn’t have the outcome I was hoping for. But all was not lost as I came out of this meal a slightly more understanding person watching my buddy watch me eat as his stomach shrieked, like it was trying to put a curse on me. But he, ignoring the pleas of his stomach, was focused on asking me questions about my life and I reciprocated with unusual candidness about my experiences in the military, my opinions on my classmates and where I felt my future was heading. I learned much about this man and I believe his fasting was central in him focusing his attention away from food and into people. We had a great conversation and we were both attentive to what each other was saying and our phones were nowhere to be found. I’m not exactly a religious person, but maybe I should give it a try one of these days as it could make me more of a caring and understanding individual.
​
But for now, I’ll just look for more creative ways to be a prick to my friends.
​ 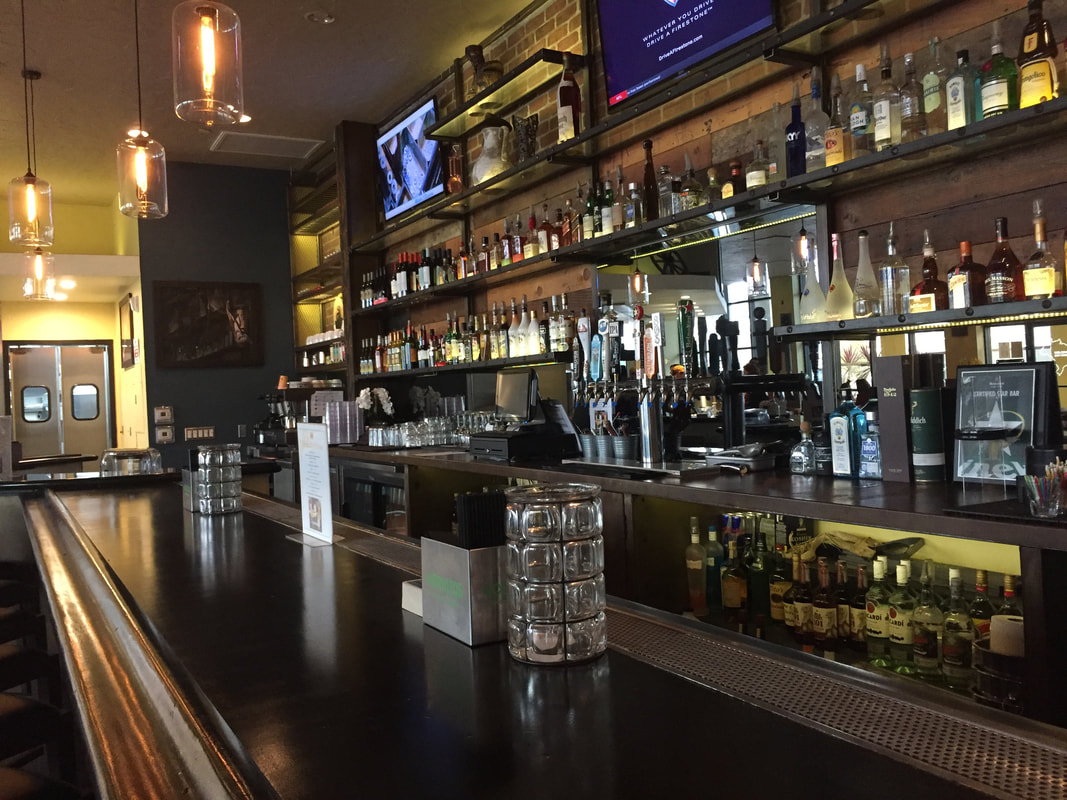