"I guess in the past my art has always been about making stuff for myself, so now it's more about making art for other people."

And so often, you know, it's like I guess in the past my art has always been about making stuff for myself, so now it's more about making art for other people. But then it’s also like, for me to do the design well, I have to enjoy doing it. So, it's always images or films that I like, kind of have a connection to or want to draw, and then it's just trying to find something which is unique in its own way or to me, that also has a connection to other people and that they that would like. It’s basically kind of picking, depending on the style of the show.

" It's just having that belief in yourself, in your talent, and what you want to do."

Knowing what you know now, what advice would you give to someone who’s just starting out?
I think it's something that there's so many online forums now that you can just kind of do, like I don't do TikTok, but you can be like a mega  TikTok person but yeah, you know, it's just kind of putting it out there and seeing what the reaction is that you get from it. Like, when I started the trading post was kind of where I started selling to friends. Then it kind of is just like a really organic growth, sort of getting feedback from people as to the designs and the styles and then people being like, yeah, I'd wear those on t-shirts. Just figuring out a balance between what people want and how I want my art to look, but yeah, doing the market and putting it out there and getting that feedback was a good thing to do as well. Just having that belief in yourself, in your talent and what you want to do. It’s kind of hard putting yourself out there and having your artwork be judged, and if it’s not successful right away you have to be self motivated.  ​
So I did some research, and you have some big names in your Instagram followers, such as Thirteen Reasons Why stars Dylan Minette and Brandon Flynn. What has been the highlight of your career?
It’s very cool when people, you know celebrities or whatever, come into my shop or at the market and like my stuff or buy my stuff or wear my stuff. The biggest highlight in probably my space here, it’s still kind of in the works I guess, since everything isn’t open fully. But to have a space on Hollywood Boulevard, it’s a highlight.   ​

"You could be at the beach and then you drive up the 2 and you could be in the Los Angeles National Forrest on the same day..." 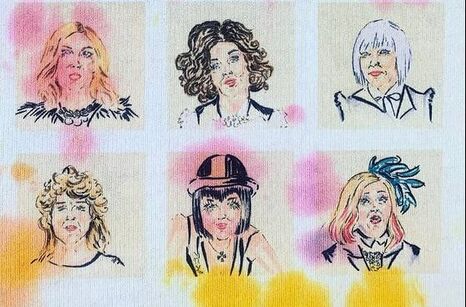 What drew you to LA?
I went to Otis College, which is like an art school on the west side, so I came to do my MFA and then I just stayed. I love the weather and like, the space of everything. Even though the traffic part of it kind of sucks. Coming from a really small island, I like that it’s expansive and really spread out. You could be at the beach and then you drive up the 2 and you could be in the Los Angeles National Forrest on the same day. There’s so many opportunities, and I think that LA is just such a unique place. It’s like what we were talking about with the celebrities, or film culture and the industry. To not be part of that, but still be inside of it, it’s interesting to be able to observe, like people watching. Always see crazy sh*t.
My conversation with Matt was an enjoyable and inspiring one. His outgoing and friendly nature as well as immense artistic ability and talent is surely a combination aimed at creating major success. Anybody who has the opportunity to stop by the Paper Eight storefront at 4685 Hollywood Blvd, should take it and add a true piece of art to their closet.