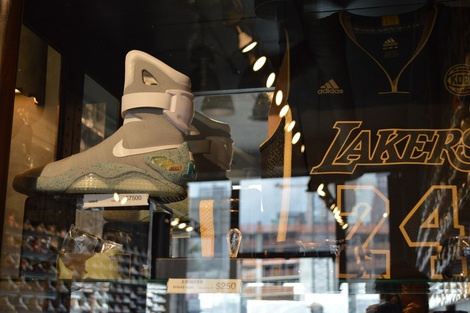 The Elusive Air Mag
The smell of the incense was too overbearing to take in. The dark room with minimal lighting, shoes from wall to wall was intimidating yet fascinating. The smell burning my nostrils made me think I had walked into an Orthodox Church.

​“I need to go outside for a second,” I told Rob Peterson.
“We just got here, what you do mean you are gonna go outside?” he laughed, dumbfounded that I was not enjoying every single minute of this Mecca of shoes for buyers and sellers.  We had just walked into the Holy Grail; which true to its name, was the holy grail of shoes, with sneakers in every style and color imaginable. We had been on our own Holy Grail quest - to find the elusive Air Mag Nikes, worth over $10,000.00, also known as the Back to the Future shoes.

Four hours previously, my long Sneaker Quest with Rob had begun. Rob and I had made a deal: I dragged him to Ren Faire, a.k.a the lovely world of Renaissance England (my passion), in exchange for him dragging me to all of his favorite boutique shoe stores to find Air Mag Nikes. 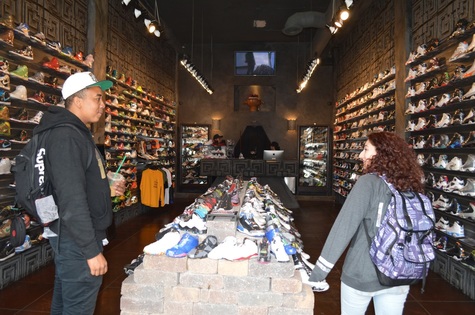 Rob and Tina hunt for heat kicks
At first it didn't seem like a bad idea. Starting out, we set our navigation to downtown LA and went on our way for what was supposed to be a day filled with shoes and hopefully a newfound appreciation for special limited edition sneakers. We journeyed to one of the most popular boutique shoe stores in LA, Flight Club, whose front door fit in so well with the surroundings that I almost walked right by it.

​“So, these stores were all, like, the main boutique stores back before large retail stores started selling Jordans,” chipped Rob while I silently sipped my nice and familiar Starbucks, walking slowly inside the store. I believed this was repayment for all the hardship he had suffered during the Renaissance Faire the weekend before, but I was ready for this challenge.
Flight Club, located on Fairfax and Oakwood, had an inviting feel to it, although it was the smallest and most crowded of all the stores. With all different types of people looking at some of the most fascinating shoes I had ever seen, it felt as though I had walked into the Comic Con of shoes! 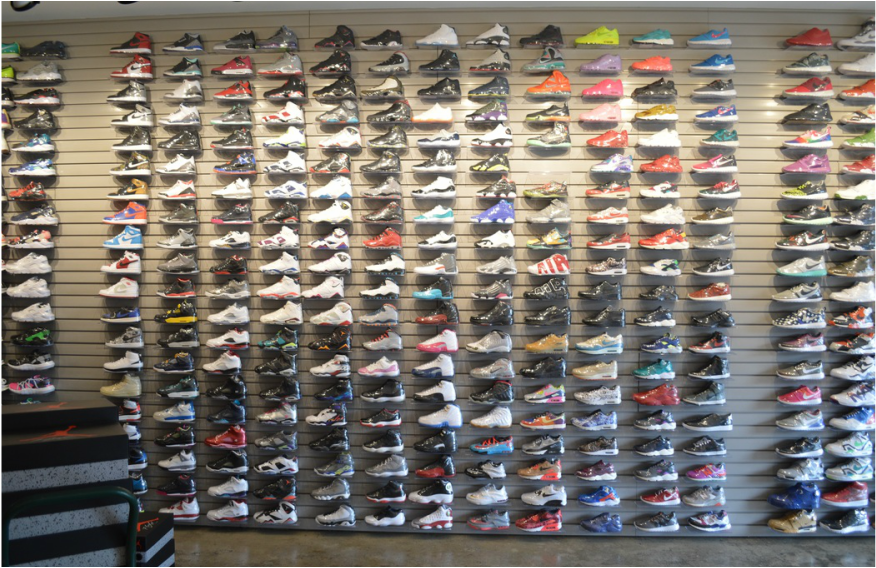 “Are these Teddy Bears on the shoes???” I asked Rob, as I pointed to shoes that had the cutest teddy bears attached to their soles. “Yeah, those are the Jeremy Scotts,” he said smiling like a child who was seeing Disneyworld for the first time. 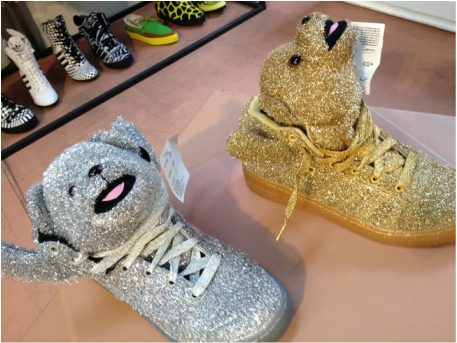 While the Jeremy Scotts looked like shoes that were meant to be left on a pedestal rather than worn out for walking, they did look athletic with a thick sole, rising sides, and a curved and low back. However, the front of the shoe was elongated into a teddy bear.

“I can so see myself wearing these out in public on Halloween,” I remarked sarcastically.

“These are actually collector edition shoes that sell for 500 dollars on the retail market,” scoffed Rob, offended that I did not know the retail price of the precious Jeremy Scotts.

​As we approached Sportie LA, our third store, I took a deep breath of relief after realizing that it was closed down. Then, we were off to 20/20, on Ventura Blvd., the store that puts all other shoe stores to shame, according to Rob. 20/20, perhaps my favorite of the four stores, had a very welcoming vibe. As we walked in, I was surprised by how well lit the store was. ​​The shoes and colors stood out in the daylight as opposed to the other dimly lit stores that I had seen that day. At 20/20, I felt much more comfortable looking around, trying on shoes and even asking the employees questions. After traveling to the other sneaker stores and experiencing every type of environment, I felt most comfortable in this store.
​As we walked around 20/20, I felt myself appreciating the shoes and the hardcore buyers, collectors, and sellers, much more than I did before. After four hours of shoe shopping with an expert, we finally arrived at Holy Grail (on Pico and Figueroa) and finally found the Air Mag Nikes on display in the window!  I realized that there was a much deeper world to sneakers that I could have ever imagined.  I have to say, I actually learned a lot about unique collector editions of athletic shoes on the market. Maybe the world of collecting top dollar sneakers wasn't as bad as I thought. But, ssshhh...don't tell Rob! 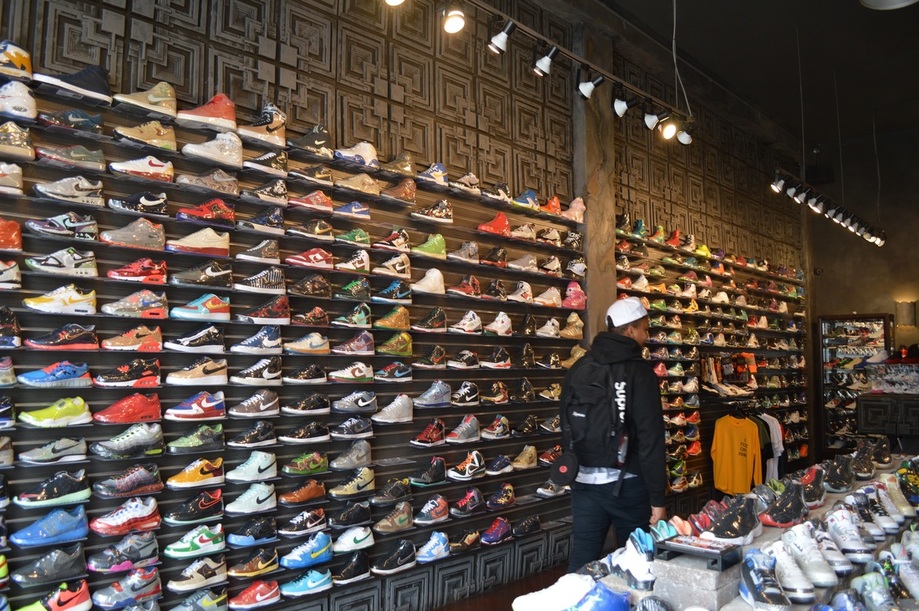