Link to the Ink:
A Visit to the Tattoo Exhibition 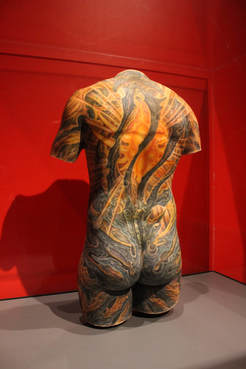 I’m not gonna lie: I am deathly afraid of needles. To be more specific, I am extremely squeamish of seeing blood as the result of a needle puncture. And even though I didn’t openly say it, I was a bit anxious while standing in the long line that led down the steps of the Natural History Museum of Los Angeles County on a sunny and breezy Sunday afternoon. I was silently asking myself, Would I see a bunch of blood? Would I see a bunch of needles pricking skin and blood oozing all over the place? After a twenty-minute wait, I finally made it inside the museum with my ticket in hand to see one of the limited-time, special exhibitions. Still on the first floor, I rounded the corner to the left until I saw a sign hanging boldly over a back entrance, proudly spelling out the word “Tattoo” in large letters. Here we go, my mind said with a sigh. Hopefully I won’t pass out in there. And that was my final thought before I began my journey into the history of tattoos.

Tattoo is a special exhibition at the Natural History Museum that is on display until April 15, 2018. It features several rooms that focus on specific aspects of tattoos, such as the history of tattoos, various reasons why people have gotten tattoos, the tattoo practice in southern California, and contemporary tattoos. 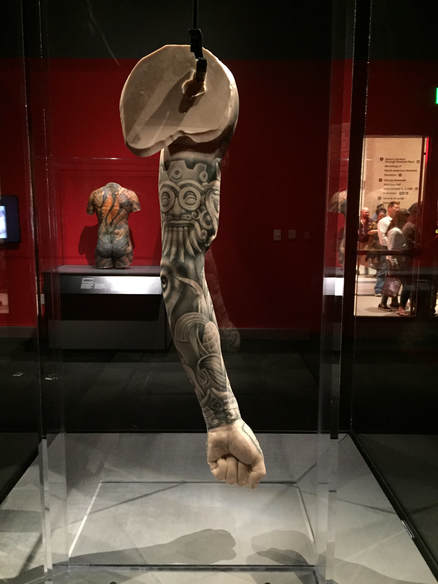 The very first room of the exhibition was blackened; the only lighting in there was on some tattooed silicone body parts in the middle of the space and against two adjacent walls. The room housed a few realistic silicone body parts such as arms, backs, and backsides that were intricately painted to resemble tattoos on an actual person. It gave a little taste of what was to come, as there were even more painted silicone body parts, including legs and torsos, sprinkled throughout the rest of the exhibition. Many of these silicone body parts were covered in plenty of densely colored organic and geometric shapes that fit together like puzzle pieces. The large coverage of those tattoo designs made me think that if those were truly real people’s bodies, the tattoo process would probably have been time-consuming and rather painful.

In the second room, a large projected video on the wall showed how an elderly, tattooed Filipino woman named Whang-Od Oggay repeatedly tapped a wooden stick against another wooden stick with small toothpick-like sticks dipped in black ink. The prickly device was puncturing a man’s arm to create a tattoo. Several display cases contained many different simple tools made from natural materials like small, pointy sticks, plant spines, and thorns that have traditionally been used in the tattoo process for years in various parts of the world. Even in poor regions today, such as the one in which Whang-Od lives, people do not have the electric tattoo machines that U.S. tattoo artists use. 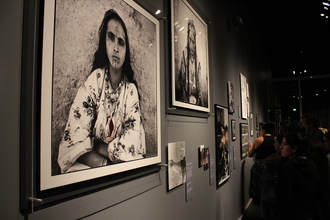 The next room showcased images of people from around the world during the 20th century who have gotten tattoos either by choice or by force. One of the most moving photographs to me was one in which there was a Holocaust survivor with her grandson. He chose to have his grandmother’s number tattooed on his arm as a reminder of the pain and suffering she had endured decades ago. Tattooing was also involved in the Armenian Genocide, as there was a photograph of a young Armenian woman who was forced into prostitution and tattooed by the Ottomans as a way to identify her as a captured Armenian. It was amazing to find out the stark contrast between people nowadays willingly getting tattoos to express themselves or to honor someone or something dear to them and people who were forced to be permanently marked for the rest of their lives with a constant reminder of the hardships they had faced. 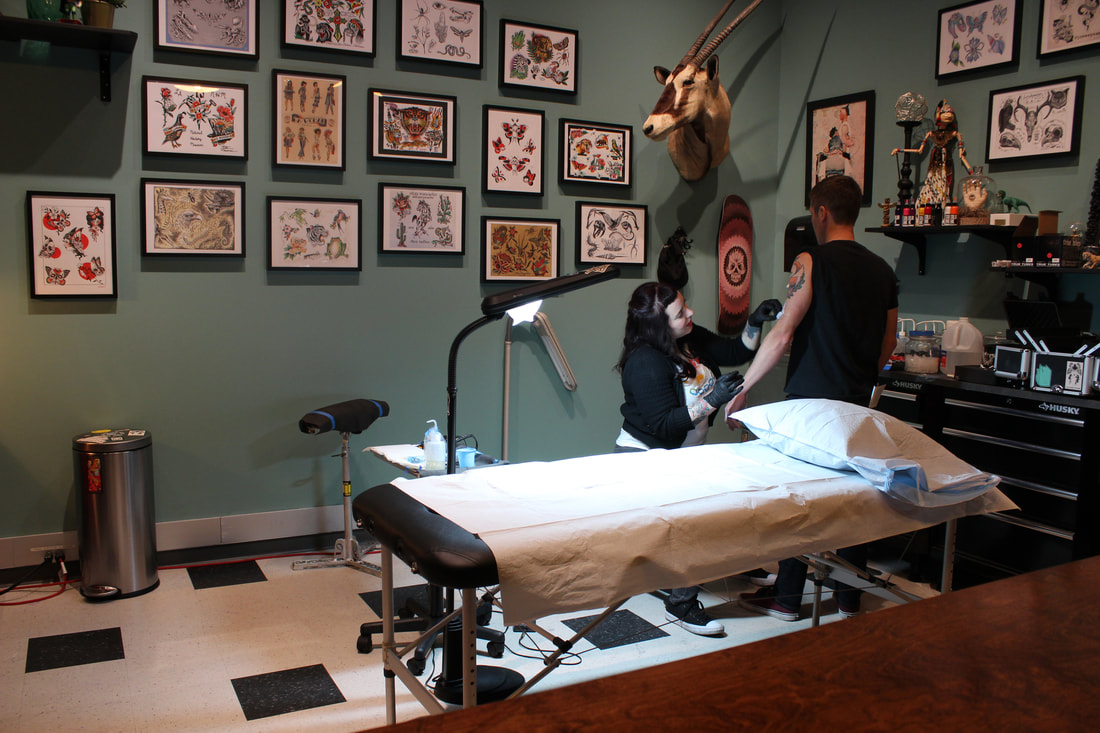 Tattoo artist Evie Yapelli prepping a client for the tattoo process
The next few rooms along the way presented photographs, paintings, drawings, and physical pieces related to tattoos in various Asian, indigenous, European, and American cultures. One of the highlights of the exhibition was a guest tattoo artist named Evie Yapelli, who was invited to tattoo guests in a room resembling an actual tattoo parlor within the exhibition. That day, a young man had wanted another tattoo on his right arm, so Evie actually prepped and performed the inking process with everyone crowded behind a tall counter and watching.
Continuing towards the end of the exhibition was an emphasis on tattooing in southern California, namely the Long Beach Pike where sailors patronized tattoo parlors and the tattoo industry boomed. There was also a room dedicated to tattooing in Chicano culture. Back in the 1970s, East Los Angelenos started out with simple black and gray tattoos. Chicano prisoners ended up further developing this style into what we now know is black-and-gray realism—black and gray shading to show dimension. There was so much depth to the images that they looked as if someone had taken a dark charcoal pencil and drawn realistic images directly onto a person’s skin. The dimension made me think at times that the tattoos were perhaps even etched into the skin. A giant projected video on a wall showed different people discussing how tattoo art had actually created a sense of community for them.

​Concluding the exhibition was a room of contemporary tattoo styles and techniques that I actually never thought existed. One such style was glow-in-the-dark ink. There was a darkened box with a silicone arm decked out in a neon orange swastika pattern by tattoo artist Xed LeHead that glowed under UV light. The swastika in this case was a motif symbolizing good fortune that has been used for thousands of years in Celtic, Greek, and Native American artwork. (It is also different from the Nazi swastika, as the crosses in this tattoo design pointed in the opposite direction.) Modern-day tattoo styles have also been much more experimental, with some designs resembling acrylic paintings and collages. However, as someone who loves geometric designs, I was definitely the most excited about the designs that were seemingly inspired by the clean, bold shapes and lines, as well as the black-and-red color palette, from the Bauhaus movement. 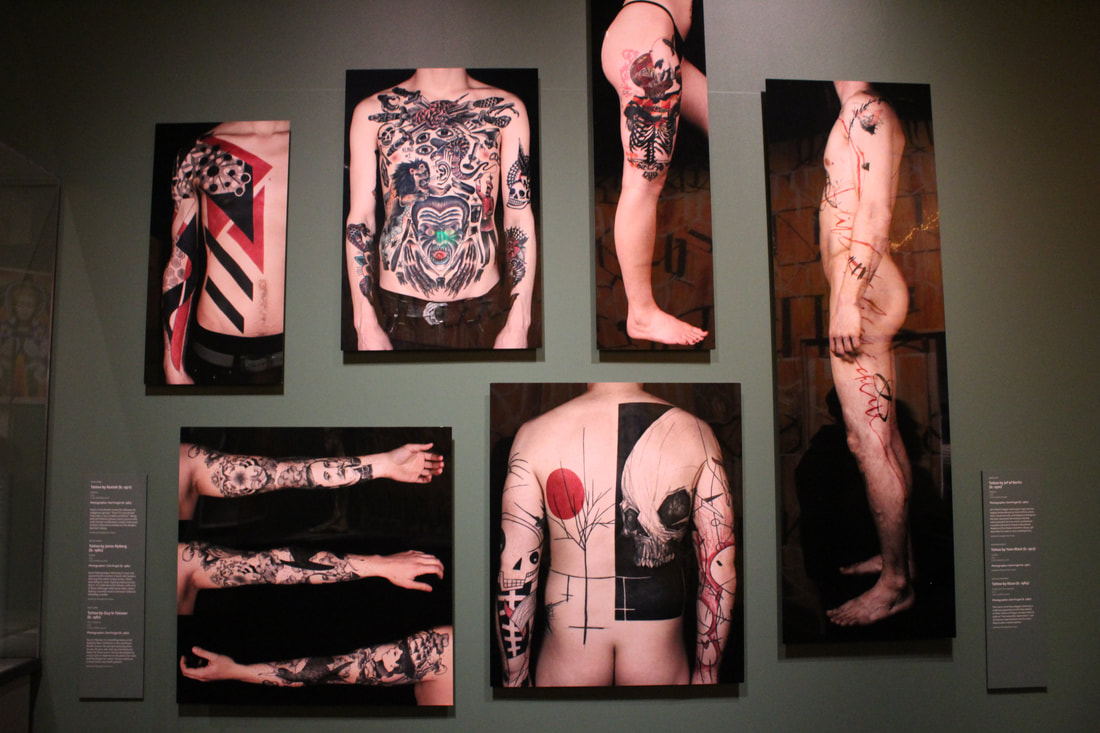 Tattoo was definitely a memorable exhibition that did not fail to impress. Although I cringed here and there given my fear of needles, I must say that the rich history of tattoos and the role tattoos have played in global cultures were remarkable and presented well throughout the exhibition. I myself would be scared s***less if I ever got a tattoo, but I nonetheless admire the beautiful artistry and workmanship associated with the craft.