As Easy as Tea Eggs

Written and Photographed by Jay McPherson 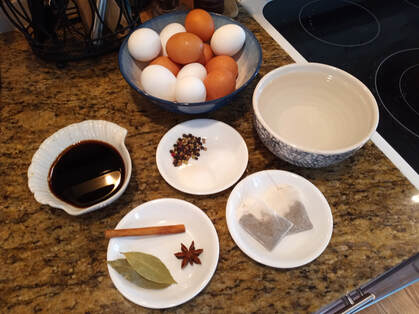 Scrambled, fried, devilled, boiled, baked, steamed, eaten raw; you name it, somebody has done it with an egg. After all, it’s basically the most versatile animal product on Earth. So versatile, you can even cook them in tea! Well. Not exactly.

Tea eggs aren’t made by cracking an egg into your kettle of earl grey. They’re a traditional Chinese food made by soaking boiled eggs in a mixture of soy sauce and spices, with some recipes not even using tea.

​On paper, it’s an incredibly easy dish that only takes a day to make properly! On granite, however, it’s another story! 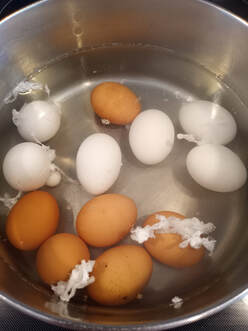 ​​STEP ONE: Get Boiling
For the marinade, combine all of the non-egg ingredients in a saucepan, then bring it to a boil. Once boiling, turn the heat down to low and simmer for 10 minutes with it covered. When the timer goes off, remove the marinade from the heat and take out the teabags, trying not to burn yourself. Easy as that.

Here’s where the hard part begins. We’ve all boiled an egg before, right? It’s basic cooking. A toddler could do it. I have never successfully soft, medium, or hardboiled an egg in my entire life, somehow. Now, I’m sure you’re wondering “Why did you choose to make an egg recipe if you can’t even boil an egg?” Great question! I wish I had a satisfying answer, but the real answer is “I saw them in a video and thought they looked funky.” So, boil those eggs in a pot of water and hope for the best (5 minutes for soft, 7 minutes for medium, 10 minutes for hard).

As you can see, I have already broken a few eggs. We aren’t even on step two yet! Once you’re done boiling your (hopefully) unbroken eggs, use a ladle or spoon to gently remove the eggs and place them in an ice bath for around 15 minutes.
STEP TWO: Get Cracking
Once you’ve let the eggs rest, it’s time to test your strength! Take out your heaviest spoon and get smashing. Actually, you’re going to want to be pretty careful when cracking the shells, especially if you’ve decided to make soft-boiled eggs like I did. Taking the back of your spoon, hold the egg and tap the shell until it cracks. Do your best to judge your strength accordingly, as some eggs will break far easier than others, and don’t be upset if you hit one or two a little hard. We just need the shells to be open enough to let the marinade seep in.

As you crack the eggs, place them into a large Ziploc bag. Don’t worry about them overlapping, it’s inevitable, but be wary with how you arrange them. One of my eggs completely busted open because I wasn’t paying attention to how much weight was on it.
​
Now that you’ve gotten all your eggs cracked and bagged, pour the marinade in with them, spices and all. It’s ok if the marinade is still hot, just make sure it isn’t so hot it’ll melt through your bag. Once the bag is full, close it tightly and make sure all of your eggs are getting soaked by the marinade. 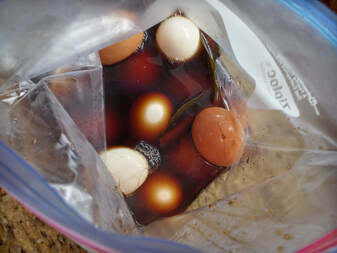 STEP THREE: Get Waiting
Time for the easiest step of all: stick the bag of marinating eggs in your fridge and leave them there overnight. Nothing else to it.

STEP FOUR: Get Peeling
Bust out that bag of eggs and get ready to get messy, it’s time to peel off those shells and taste your lovingly made tea eggs! Unless you’re a fan of the crunch the shell adds, in which case, what are you waiting for?

Peeling off the shell of a boiled egg, especially one that’s already been cracked shouldn’t be too much trouble, right? Just run some water over the egg as you pick off bit by bit, revealing the beautifully marbled tea eggs you spent all night dreaming about. That is, of course, unless you soft-boiled your eggs. If you soft-boiled them, get ready to spend the next hour hunched over the counter struggling not to crush the tenderest non-living things you’ve ever held. 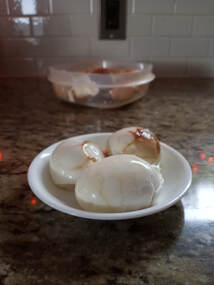 ​STEP FIVE: Get Eating
As you can see, I was immensely successful, overcoming all the odds and making the most perfect tea eggs to ever exist. They were so perfect in fact that they made my friend’s 90-year-old Popo (grandmother) cry (with laughter). No, I did not use 12 eggs for this recipe, I only made 3. Why do you ask?

Finally, it’s time to taste these strange little things we’ve spent the last 24-ish hours making. That is, if you don’t have a dog with a telescopic neck. The instant I turned around to call my roommates to taste test my eggs with me, my chaotic evil puppy Lumi decided it was snack time. So, after all that hard work, I didn’t even get a chance to taste my own creation. She didn’t get to the sludge that were the eggs I destroyed trying to peel, but I don’t know if I could have willingly eaten that mess. 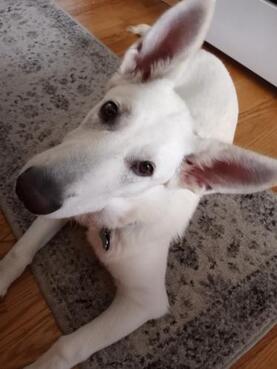 ​Final Thoughts
Although I don’t think I will be revisiting this recipe anytime soon (unless Popo Lee wants to teach me how to boil an egg properly), it was nonetheless enjoyable to shoot my shot and make an attempt.

Would I try a street vendor’s tea egg? Absolutely. Would I have tried my own? I would have at the very least considered it. At least Lumi looked like she liked them, and she was delighted to get the rest of the eggs for dinner.


For a link to the actual recipe:
https://omnivorescookbook.com/chinese-tea-eggs/