Not Your Average Cup of Tea

Written by Dakota Daniels
​Photos by Aaliyah Thomas
It can be argued that in the city of Los Angeles, California, one is never short on coffee shops. In fact, you can find a Starbucks or  Coffee Bean on every corner. All these coffee shops are quite vital as LA inhabitants are constantly on the go and need their morning brew so they can actually function as normal human beings. Although so many rely on coffee shops to help get them through their days, there are some people in LA who don’t drink coffee and don’t have a spot in the city to go to after work or on the weekend to hang with friends. Arlene Yuan, founder and owner of a tea shop in North Hollywood, was one of them. Born and raised in Phoenix, Arizona, Arlene Yuan has been running her own tea shop called TeaPop in North Hollywood, which just recently celebrated its 2nd year anniversary.

Located on the corner of Vineland and Otsego, Arlene Yuan's shop has done more than provide great tea, coffee, and boba. Unlike other coffee and tea shops in LA, TeaPop is home to a community of artists and loyal customers, who all call TeaPop their home away from home. After their two year anniversary, Arlene sat down with 7500 Magazine to discuss being an entrepreneur in LA, the true purpose behind TeaPop, and what it means to the community of North Hollywood.

TeaPop just celebrated its second birthday. Did you think that would ever happen?
​“When I started this business I knew I was way in over my head. I've never worked in a coffee shop or cafe ever in my life. I didn't really know much about the product so I kind of made it up  as I went along, which is kind of good when you don't know the rules because you can make up your own. I knew it was going to be something I just didn't know how fun it was going to be or how much I was going to love my staff.  The first year was such a blur because you're just in survival mode. One thing about the city of LA is that it is  not very friendly for small business to start up and operate just because it is so expensive and all the taxes. There are a lot of barriers to get through. It felt impossible, but I knew deep down it was going to work. Also, failure was not an option and I am very adaptable. If it didn't work out as a cool tea shop than it would become a kids gymnasium for all I know.” 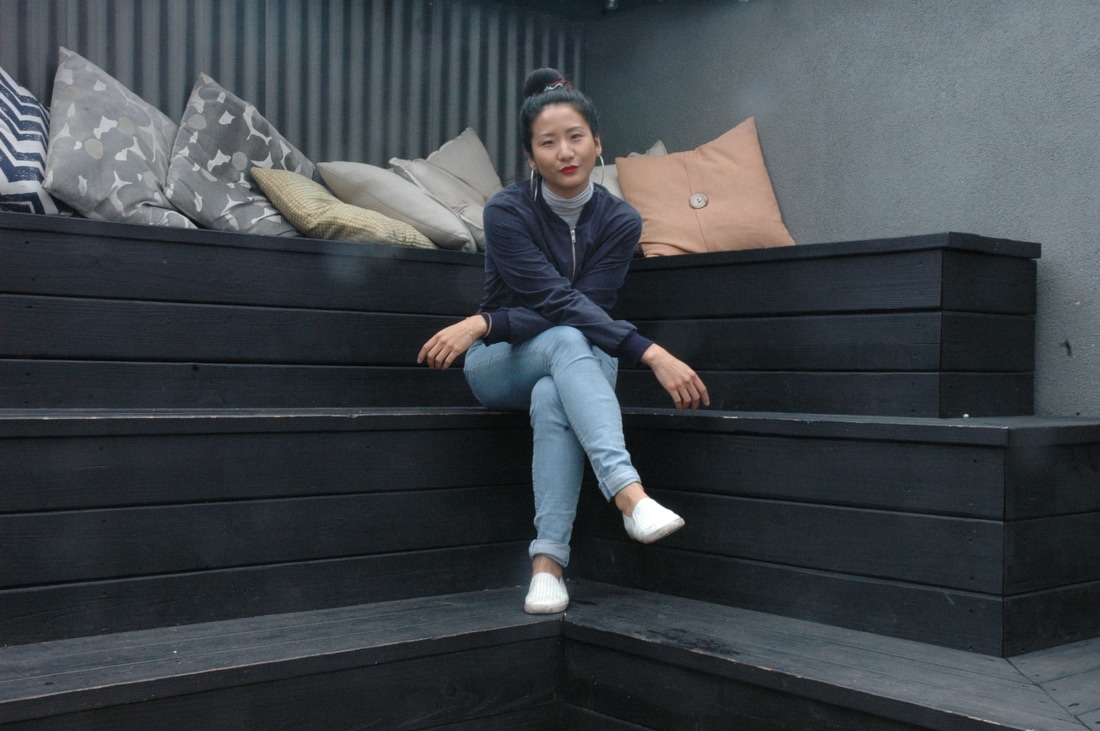 “I didn't really know much about the product so I kind of made it up as I went along, which is kind of good when you don't know the rules because you can make up your own.”

Why Tea, Boba and Coffee?
“Personally, I love the idea behind the coffee and coffee shop, because it’s not your home and it’s not work. It’s this other place where you just get to be, which is an element that I love about coffee shops. Although I am not a big fan of coffee, I do love drinking tea and realized that there aren’t many spots in LA that are cool in that it is not a tea place with an old asian woman serving you. It was an untapped world. Eventually, I began following the tea market and started to look at where it was going. People were starting to bottle it, serve it in supermarkets, and it became a large part of the 'LA diet.' We are in this health era and people in LA particularly, lead very healthy, organic lifestyles. So, I created that space with TeaPop."

A large part that makes TeaPop special is all the artwork. Why did you decide to incorporate art into the fabric/mission of TeaPop?
“The original idea was to have a space and community sort of thing for artists. However, art doesn’t sell. People look at it, they appreciate, but they don't buy it. I knew I couldn’t open up a gallery. I needed a commodity and something to make money with so that I didn't have to profit off the art. I have so many friends who are artists in LA who are so talented but don’t have a space to show it, at least one that isn’t super pretentious. I wanted to find this middle ground where it was very low commitment for an artist to come and show their work and  have an opportunity sell it in a place that wouldn’t take a cut. All artists here get 100% of the what they sell. To be honest, it is trade off for me because they create an ambiance for the tea shop, while they have a place to sell their art and keep 100% of the profit. For me, I didn't want to make money off the art because I believe it is best to keep art as art rather than as business.” 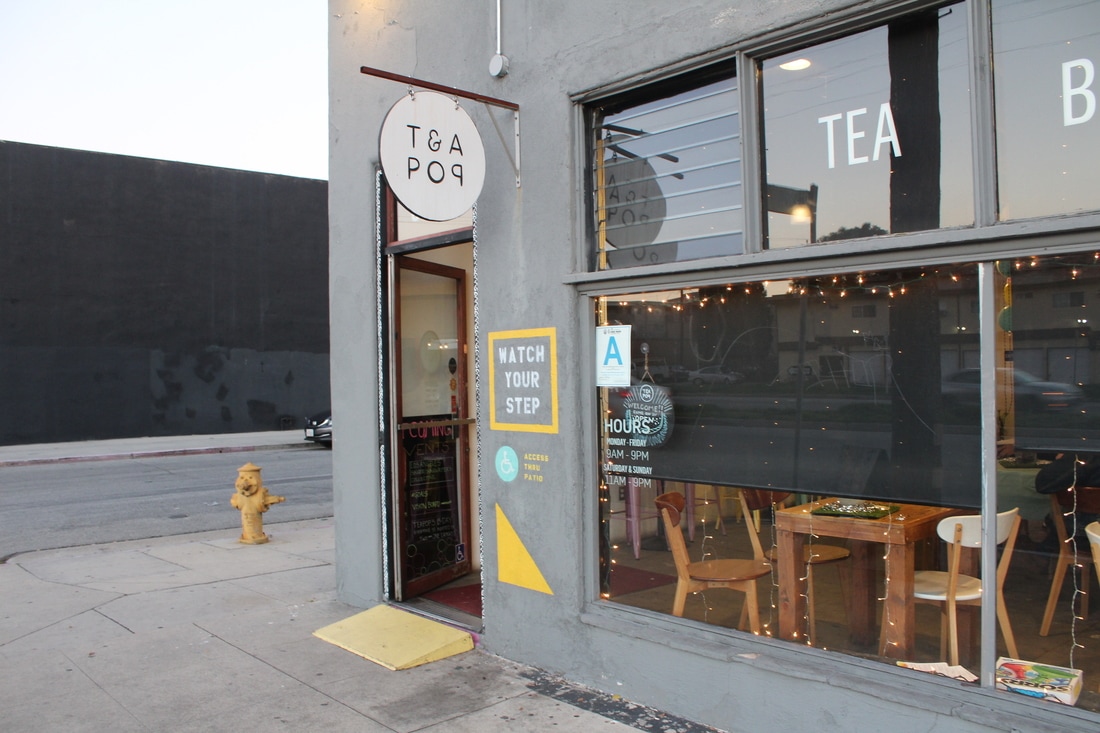 TeaPop in North Hollywood
Why did you choose to open up shop in North Hollywood?
“When I was dancing, one of the major dance studios that I trained at was in this area. Also, I live very close by to Noho. Having danced and lived in the area for so long, I developed a deep understanding of the community and the neighborhood. I knew what people ate and drank. I knew where they gathered, what they bought, how they bought it, and why they bought it because I was one of those people. It was really important for me to have an integrity if I was going to make a place for artists, people to be creative, and bring your friends to be loud, feel refreshed, know everyone's names, and have this sort of village vibe. For that to happen, I had to open up in a place where artists live and that place is North Hollywood.” ​

“It was really important for me to have an integrity if I was going to make a place for artists, people to be creative, and bring your friends to be loud, feel refreshed, know everyone's names, and have this sort of village vibe.” 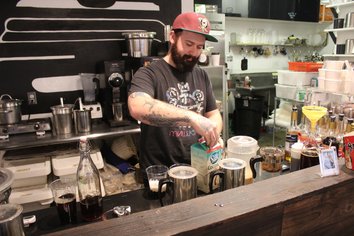 Along with featured artists and loyal customers, you have an incredible staff. What makes someone a good tea-rista?
“They have to be outgoing yet very chill. They have to be able to make a customer's day better. My tea-ristas have to know that you are not just serving people a delicious drink but you're making them feel welcome and wanted. Also, I like when my employees have a sort of quirkiness to their personality.”

​What words of wisdom would you give to future business owners and aspiring entrepreneurs like yourself?
“Everything looks really, really scary from afar. But once you begin experiencing it, and allow yourself to be present, you realize that it's all about growing. Find value in life and you will find purpose in life, especially with whatever mission you wish to set forth. However, you have to start from your core. Make sure that whatever you venture into has value to you. If you are going to take up space in this world with some sort of business OWN IT! So yea, know your core. Also, it is super important to have a plan b if not a plan f. In my early years, I started little business here and there and experimented how I wanted to become an entrepreneur. When you fail enough times you realize that it is part of the process it doesn't mean that I am not going to be successful.”

“You have to start from your core. Make sure that whatever you venture into has value to you.” ​ 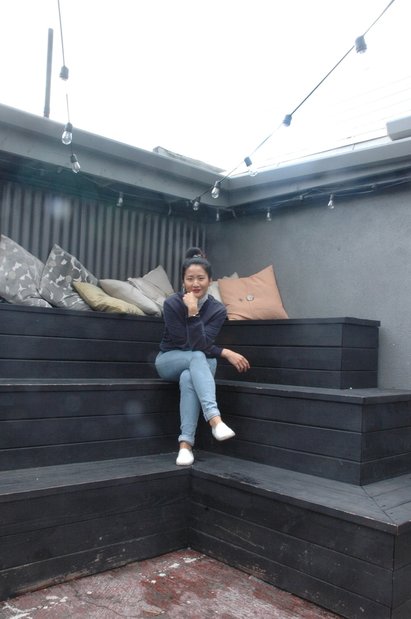 How do you define success?
“To me, success is very relative to the experiences you have. So experience for sure, as well as having people, on a day to day basis, telling me how much they love coming here. If people are constantly taking the time to show their appreciation than that is a huge win. Even if it is just ten people, that is more than enough. Success is based off of life and your support system. Even if Teapop burned down and I had nothing left, I would still feel a sense of accomplishment and success. Just keep working from your core and you will find success.”

In one sentence, state the mission TeaPop.
“To provide a space that serve the community and allow people to be creative.”

Where do you see TeaPop in ten years?
“However many years from now, I intend on still having this place up and running. I definitely plan on expanding and opening up other locations. I even may want to have some sort of TeaPop headquarters. I love collaboration, so creating some sort of warehouse space with six other brands that compliment what TeaPop does would be cool. I also want to start going wholesale and sell locally to other shops, hotels, restaurants, and maybe even nationally. Teapop could become anything to be honest. It could be an art house with tea on the side. I love coordinating events as well so that is definitely in the cards.”

What is your best selling drink?
“Peach mango milk tea with boba.”

​What is your favorite thing on the menu?
“I love my chia seed pudding. It is actually my own recipe and I worked incredibly hard to get the recipe just right.”