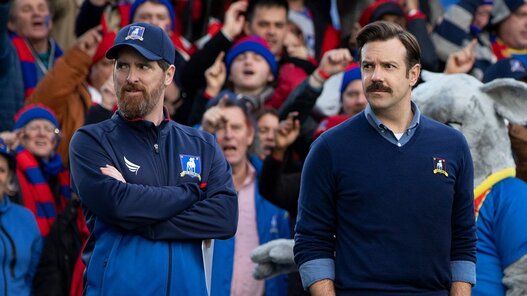 Coach Beard and Ted Lasso. Image courtesy of Apple
The season finale of Apple TV+’s Ted Lasso has come and gone. The series, starring Jason Sudeikis, has flown mostly under the radar during the Coronavirus pandemic, during which numerous streaming platforms have released a flurry of new programming. However, at a time when our country is so divided and experiencing so much angst, Ted Lasso may be just the tonic we need.

The show’s titular character, played by Sudeikis, is the new manager (head coach) of AFC Richmond, a fictional English Premier League team. This predicament is particularly strange given that Lasso is a folksy Midwesterner whose only coaching experience is in Division II college football. Hijinks ensue as the odds mount against him over the course of the football season. Yet slowly and surely, Lasso’s earnest personality and stout optimism win over the hearts of those around him. For Sudeikis, this show may be a defining role.

Ted Lasso finds Sudeikis playing a character that was tailor made by and for him. As a lifelong viewer of SNL, I have always rooted for the cast members after they move on from the show. For Sudeikis, it feels like he has finally found his niche, at long last. When he was first featured on Saturday Night Live in 2005, it was on the heels of one of the greatest eras in SNL history. In the preceding years, late ’90’s staples like Molly Shannon, Will Ferrell, Tracy Morgan, and Jimmy Fallon moved on from the show, among others. In 2005, after two years as a writer, Sudeikis began his feature on the SNL cast, alongside fellow newcomers Andy Samberg, Kristen Wiig, and Bill Hader. Out of the new group, Sudeikis’s comedy was easily the most subtle. Part of that is due to his equal-parts-devilish, equal-parts-encouraging delivery, with the good looks to boot.

Slowly and surely, Lasso's earnest personality and stout optimism win over the hearts of those around him. 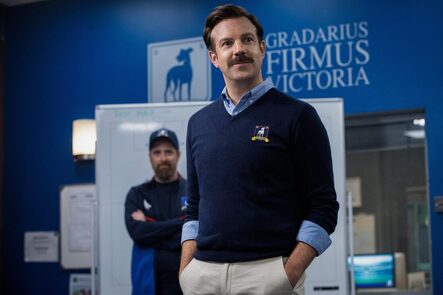 Image courtesy of Apple
Between 2005 and 2013, Sudeikis became a star on SNL. Bolstered by a couple of steady impressions- Joe Biden included- as well as a portfolio of recurring characters, Sudeikis filled a rare niche in the cast. By the time he left in 2013, he had already begun to star in comedy features, including 2011’s Horrible Bosses, and 2013’s We’re the Millers. 2013 was also the year that Ted Lasso first premiered. Back then, Ted Lasso was a character played by Sudeikis in a line of commercials for NBC’s broadcast coverage of the English Premier League.

Through the rest of the decade, Sudeikis developed an eclectic body of work, ranging from the indie comedy of 2015’s Sleeping with Other People, to the historical drama of 2016’s Race, wherein Sudeikis plays Larry Snyder as he coaches Jesse Owens to the 1936 Olympic Games. The actor brought to each role a cool enthusiasm and sly wit, and by 2019, when Sudeikis began producing Ted Lasso as a series, he had built a career that spread beyond the limits of comedy. His life too had taken on new meaning. He and his wife, actress Olivia Wilde, had had two children, and Sudeikis’s worldview adjusted accordingly. 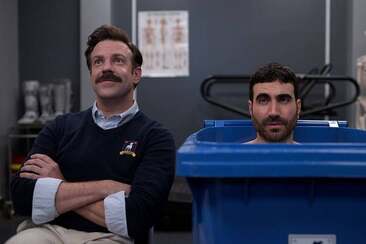 Coach Lasso and Roy Kent. Image courtesy of Apple
​The brilliance of Ted Lasso lies in its unremitting nuance. In 2020, 30-minute comedies come in a variety of forms, many of them more absurd than the last. Ted Lasso, on the other hand, goes for a subtler approach. The filming is crisp and clean, but never glossy or sterile. The comedy also never ventures into surrealism or absurdity.

​Sudeikis and the rest of the writing team manage to thread the needle, writing an American sports dramedy that is buffeted with some of the best written comedy that Sudeikis has performed. By his side nearly the whole season is Coach Beard (played by Brendan Hunt), who delivers a constant dash of swift, wry humor, as well.

This show is able to conjure the kind of profound, simple humanity that hasn't been common in television or film for decades. 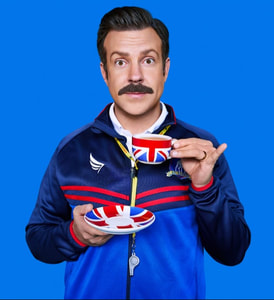 Image courtesy of Apple
However, beyond the comedy lies the true gem of Ted Lasso. This show is able to conjure the kind of profound, simple humanity that hasn’t been common in television or film for decades. Lasso is incorrigible in his optimism. Against the backdrop of a dreary English landscape and its mass of skeptical football fans, Lasso manages to win over their hearts, one by one. He is earnest and thoughtful, kind but true. He cares deeply about the sport but even more about being a proper sportsman. Lasso’s relationship with adversity and doubt is more aspirational than anything that the internet has to offer today, and during a global pandemic and a national political crisis, dealing with adversity is a topic we are all facing.

Jason Sudeikis is now in the prime of his career, and he and the rest of the crew on Ted Lasso have done a marvelous job of transforming a television commercial into a premium program. While it may still count as a form of escapism, Ted Lasso offers something decent to aspire to, within the world of the show and outside of it.
Ted Lasso is currently streaming through Apple TV+.