Written by Briana Pong
​Photos by Barsuren Battugs and Christian Tello
After I knock at the front door of a pale yellow house in a quiet residential neighborhood on a beautiful Sunday afternoon, a friendly and pleasant face opens the door, greets me with a smile and a handshake, and invites me in. The skylights in the high ceiling of the spacious front room welcome a wash of cheerful lighting that spreads across the entire room and to the long dining table bordering the adjoining kitchen area. “Please make yourself comfortable. Would you like something to drink?” My host cuts up a delicious-looking submarine sandwich into sections in the kitchen and lays them out on the dining table along with a bowl of chips and a few glasses of water. “Let me grab my tea. Please help yourself to some food!” We sit at the table, and for a moment it feels like I am about to catch up with an old friend of mine who I have not seen in ages. That’s the vibe Traci Kato-Kiriyama gives off.

Traci is a Japanese American multidisciplinary artist who has been writing, acting, and engaging in community organizing since the 1990s. Every word she speaks communicates her strong desire and conviction to bring about social change through creative means. Kato-Kiriyama grew up in Torrance but now resides in Gardena, CA. Although her list of talents is the length of an encyclopedia, she tells me it all roots in her passion for storytelling. Her stage play Tales of Clamor​,​ which was inspired by the 1981 Commission Hearings towards Redress for Japanese American WWII incarceration, will be produced in February 2019.

​"I think everybody's a storyteller. I think that's how we get to understand what's important for ourselves as well as for the other person as we're sharing stories."

How did you become so involved in different fields, like writing, performing, and community organizing?
“My parents would always emphasize me learning from community: learning from elders, learning from other people that I was not familiar with, getting out of Torrance as much as possible, going to Little Tokyo as a child, an adolescent, and a young adult. I saw Asian American performance artists (like Nobuko Miyamoto, Jude Narita, and Denise Uyehara), musicians, and documentary films that were a huge influence on me. I had an internship at the Japanese American National Museum when I was in college, and I worked with Karen Ishizuka, who really taught me a lot about why we do the work we do and the kinds of stories that we find in our own history that are amazing! And I think all of that was an influence on me when I started to write. There is a nationally circulated Japanese American paper called the Rafu Shimpo that gave me an opportunity to publish through a column called Through the Fire. When people started to actually talk to me about what I was writing, I was like, ‘I really need to step up my game and just take responsibility for all the words that I’m putting out there.’ I saw an Asian American theater company called Here and Now. They were young folks on stage writing and telling their own stories. They had made an announcement at the end of a show that they were holding auditions and no experience was necessary. I auditioned, and then they just happened to need people to tour right away, so I had on-the-job training. And as we progressed in the company, I wanted to put more time into writing as well and not only perform or act. As I was deepening my practice, it helped me to understand the ways in which I relate to other folks in the community. I think what made sense to me was being a cultural worker, like, ‘I’m going to address issues, connect with people through this work, and build relationships and organize that way, like inform folks about an issue through performance and bring folks into the fold.’” 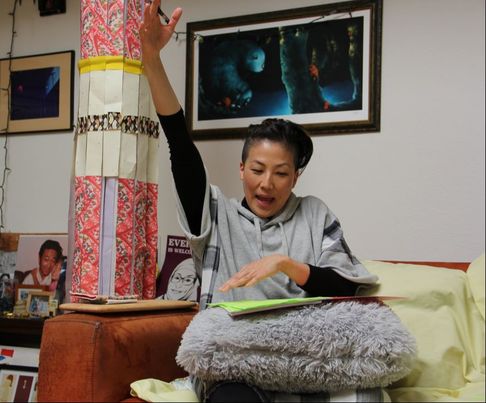 What kind of topics do you like to work with the most?
“Right now I’m working on a book of writing, including a lot of poetry, notes to self, community and world, essays, fragments, monologues—all kinds of story that needed to come out in these different ways. And within that, the writing is on everything from grandparents and war to being diagnosed with cancer, to Los Angeles, art, babies, otherness, death, mental health. Related to cancer and mental health and war for that matter, I’m thinking quite a bit on self-care and how we can deepen the language to bring community into the fold of our wellness and healing process. When it comes to writing on issues we are facing in society and world, I try to honor what’s coming up constantly in my mind and conversations with people— issues of Islamophobia, racism, violence, xenophobia, trans- and homophobia... the solidarity needed from my own community to step up in relation to our own history with struggle and other communities of color... the need for more time and space to just be with one another. I think life is the material—the people around us, the things around us. I think a lot about war in terms of my family history, World War II, Japanese Americans, both my parents and all of their family pretty much going to camp, having things taken away, coming back to nothing, starting over, having things taken away again, starting over again, living poor. I think about my parents raising me in a middle-class neighborhood in Torrance but my mom being one of the only mothers in the area who was working. [I think about] getting everybody’s hand-me-downs and loving it until it was pointed out to me that that was not cool. Loss and death are always on my mind—and not in a morbid way. I’m very, very grateful for all the people that have come through my life and all the lives that I have been able to be near.” ​ 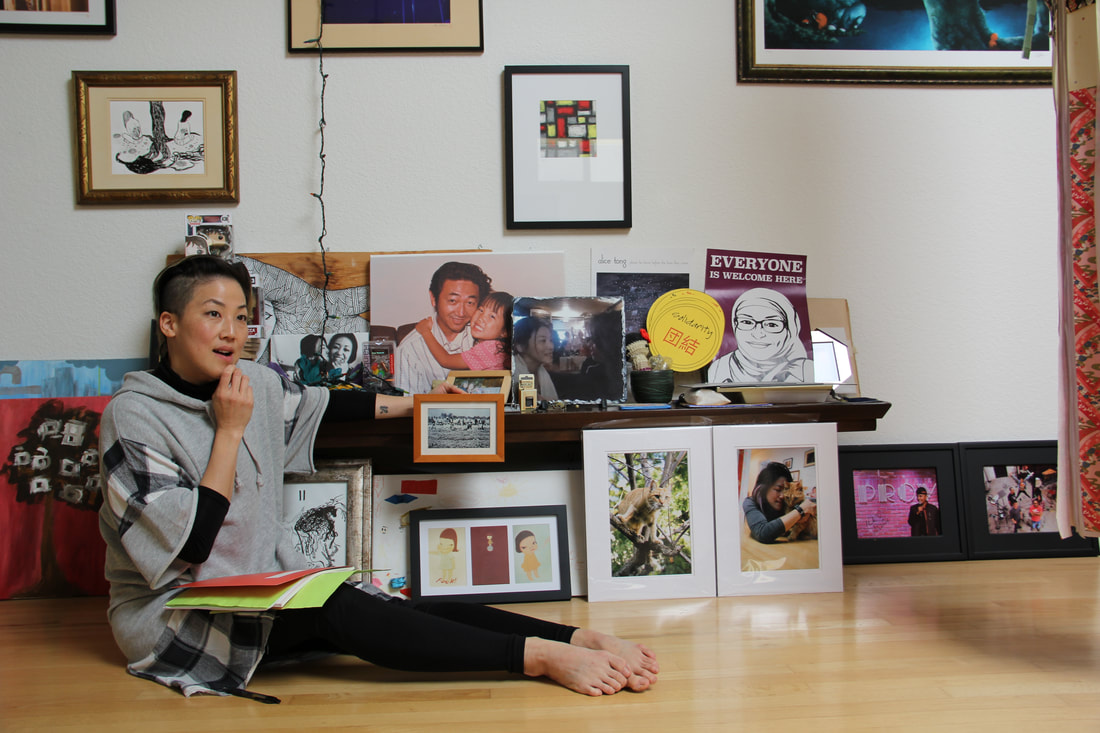 Would you be able to talk a little bit about Tales of Clamor?
“That’s a project with my stage partner Kennedy Kabasares, who is an aerial artist and an actor. [Hundreds of people testified during hearings for the Commission on Wartime Relocation and Internment of Civilians] in 1981. So folks were put away in 1942, and for literally the majority, that was their first time talking about it, even with their families. Imagine people holding in this pain, shame, anger, loss of dignity, feeling like they were wrong, feeling like they were completely alien, and just holding that in for nearly four decades by the time those commission hearings started. In 2014, Kennedy and I approached NCRR, Nikkei for Civil Rights and Redress, and we said, "We have to do something with this footage!” And then over time, I realized it’s not just the drama of the footage that compelled me. It’s the underlying journey of silence that builds and becomes deafening—and it can no longer be held in and so becomes clamor. And the road to the Commission Hearings sometimes feels lost on the community today. My character points to the virtues of noise and wonders with a lot of angst about what it takes to get her people to show up for others today. Kennedy’s character points to the virtues of silence and challenges her to think about how people show up in different ways. They explore cultural and institutional silence and embark on making art around it all. And it’s set in a circus school [laughing]!" 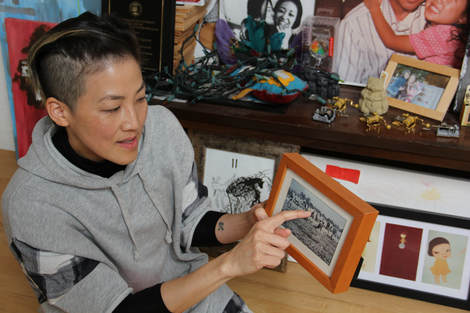 Traci pointing out her grandfather in an old photograph
​​What or who do you feel are the major influencers or sources of inspiration for your work, and why?
“My mom has always been one of my muses. I’ve written quite often about my grandmother on my father’s side, so I found more recently an interest in writing through some of my grandfather’s stories. I think because my mom has shared more stories about him in more recent years, I feel like I’m piecing together a little bit of his journey. I think I’m fascinated by certain concepts of physics, so I think a lot about the relationship between space-time and art and community. Living through life is also an influence. When I was going through radiation last year, I thought about the relationship between healing and getting better through radiation versus radiation, fallout, and the atomic bomb that also affected my family during the war. The amazing community of writers around me right here in Los Angeles are constant sources of inspiration and influence, and there are too many to name. I would say that family, community, space, living, and death are my main influences.”

What is the most important message or the big idea you want to communicate with everyone through your work?
“Do everything respectfully but unapologetically. We have every need and right to make amends with our past, we have every need and right to be emotional people, we have every need and right to be seen as very layered people. Maybe it’s to have gratitude, maybe it’s to have a sense of fight in this life, like to fight to live, to fight to survive. I don’t know. [Laughing]. On a very basic level, I think I’m always searching for memories. I’m struggling with memories, though. Sometimes memories are hard to have. They’re hard to hear. And some memories are great to hold. Then there’s our pride; there’s our sense of being.”

​For those who want to pursue a career in writing, performing, or community organizing, what advice would you give them?
“I am in no way going to say that it hasn’t been a challenge. It’s always a challenge. But my advice, if any, is—my friend said this to me and she got this from this acting teacher—that if you can imagine doing anything else and you like the idea of that, you should do that ’cause this s*** is hard. I’m paraphrasing [laughing]. You have to be in a place where [you think], “Yeah, I can’t really imagine doing something else.” I said to a young musician that there are many options, many ways in which to pursue a creative life. There’s no one way. We’re in control of our situation. Make the time to make that happen because you don’t even know your own practice if you’re just starting. You don’t know your voice, your style, what gets you going, what inspires you. So with that, I also say as another piece of advice: People should be very clear about why they’re doing this. What do you want to do once you’re in that place? What is it you imagine? Spend some time with yourself and in conversation with others to analyze the whys. And then you’ll get there.”

"I said to a young musician that there are many options, many ways in which to pursue a creative life. There’s no one way. We’re in control of our situation." 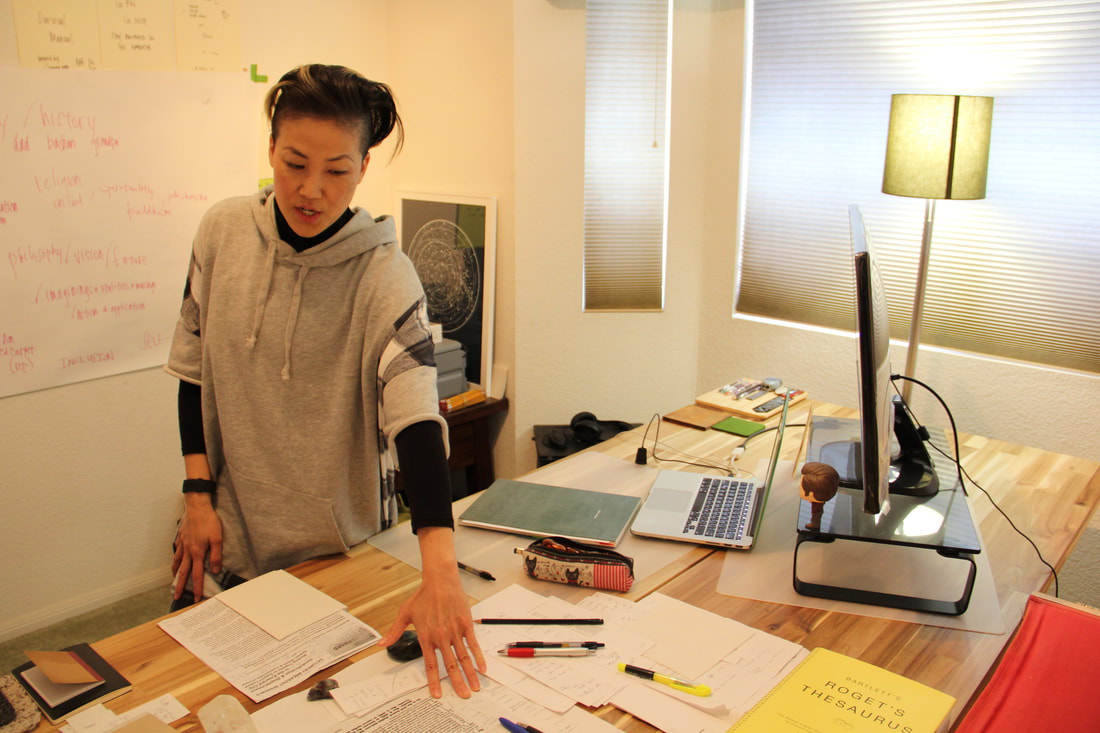 Traci's creative space
Traci’s passion in addressing and bringing awareness to issues through more artistic channels makes her a remarkable individual. Her dedication to bringing together communities to try to stand up for what is right proves that she is a true leader and inspiration to countless others. Traci and her efforts teach us many life lessons: Be truthful, no matter how much the truth hurts. Embrace all your emotions, regardless if they are positive or negative. And most of all, join with others to engender positive change in our world—because we can’t always do it alone.

​Find out more about Traci at traciakemi.com.