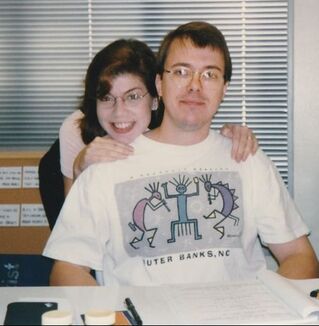 Valerie and Vince Gilligan
From acting, to writing, to producing, Valerie Mayhew can say “been there, done that” about almost anything related to television and theater. Having written on shows such as The X-Files and Charmed, Valerie is currently on a screenwriting hiatus, instead shifting her focus to an unexpected passion – teaching. She brings a level of dedication and true passion to the classroom that is almost impossible to surpass, and her genuine love for her students shines through both in person and online.

A Julliard alumnus, Valerie got her start as an acting major, but soon found herself working not in theater, but in television. Together with her sister, Vivian, Valerie joined 21st Century Fox under the mentorship of Vince Gilligan, who at the time was a writer and producer on The X-Files. Valerie notes how incredibly lucky she was to not only get her first professional job working on such a prolific show, but to be mentored by Gilligan, who she called “one of the nicest men in Hollywood.”
​
Valerie worked as the first assistant to the executive vice president of production at 21st Century Fox and had been doing so for 2 years before she revealed herself as a writer. In her words, she “had to earn the respect of the men before [she] could openly write.” She, along with her sister, proved themselves as more than capable when they wrote a spec-script, which they then submitted under men’s names.

“I didn’t want to be treated with bias, given who I was working with and who I knew. I wanted genuine, impartial feedback and I knew I wouldn’t have gotten it because of how much of a male dominated industry it was.”​ 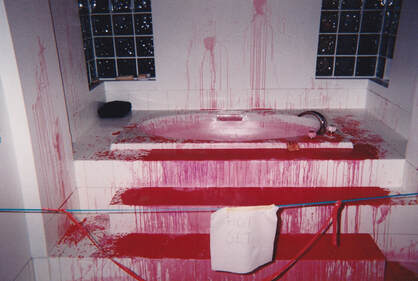 A prop from "Sanguinarium".
When Valerie came forward to her executives about the spec-script, revealing that she and Vivian had been the ones to write it, they were floored. Rarely does a spec-script get somebody hired onto the show they wrote it for, but Valerie and Vivian soon found themselves in the writer’s room. Something Valerie noted was that “of all the 200 episodes of the original run of The X-Files, only 7 of those episodes were written by women.” One of these episodes, “Sanguinarium,” was the only episode Valerie was credited as a writer for and was also only aired once, due to excessive amounts of blood.
​
In spite of her early luck in the field of TV writing, Valerie made it clear that things weren’t easy. Working on The X-Files was a hard introduction to Hollywood, and the work only got harder. It was the 90s after all, a notably lawless period in all fields of Hollywood.

Not only was the industry rife with misconduct, it was cut-throat and unrelenting. Unlike film, TV has an incredibly fast and chaotic production, with many shows coming down to the wire between episodes, and as a writer Valerie found herself caught in a cycle of high-stakes and endless pressure, at one point working for 13 weeks straight while pregnant.
​
It would be years before she finally learned how important taking a break is. Vivian decided to retire as a screenwriter several years before her sister, having been too beaten down by Hollywood to continue. It would take a high-risk pregnancy and the encouragement of her husband for Valerie to take a step back and realize just how ground down she was too, and how desperately she needed time away from the nonstop cycle of TV writing. Deciding to get both a refresher and breather, she went to grad school, with notably no intention to teach.

“There is something powerful about live theater, more powerful than television. It’s transformative for the audience and it can fundamentally affect them unlike anything else. That’s why I started acting.”

Valerie immersed herself in directing and coaching theater, going back to her actor roots. She has a deep love of theology and the ritual of performance, something she quickly found herself imparting onto others when she began teaching actors with a friend. It was here that her burning passion for teaching was sparked, when one of her actors asked for her to review a script. Valerie, having found the call to write had returned since she began teaching theater, realized she found it immensely satisfying to teach writing as well.

From there, Valerie began teaching people she knew or were lead to her through word-of-mouth, but then, through a series of wacky circumstances, she ended up teaching at Mount Saint Mary’s University. Although it was a much more formal environment than what she was used to, Valerie found herself excited for the challenge. She had been working as a professor for several years when Dr. George Larkin of Woodbury University was promoted to the Chair of Filmmaking, making him unable to continue teaching screenwriting. When Larkin extended an invitation to Valerie’s husband, Matt Greenberg, he instead directed Larkin’s attention to her.
​
Valerie has since been working as a professor at Woodbury and her passion for teaching burning ever brighter. She prides herself on the amount of time and energy she puts into every student, believing that everyone should be met on their own level in order to truly improve, especially given how personal writing is. In her opinion, every student needs to be able to live, breathe, and grow into themselves as writers, and she is honored to be able to help them find their voice and the power that comes with that. 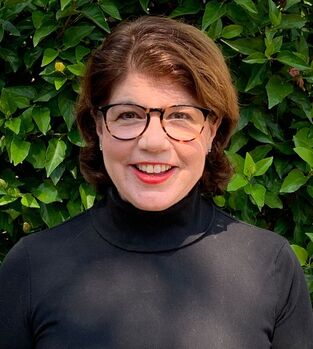 In her years as a professor and teacher, Valerie has come to realize it isn’t writing that she enjoys teaching, it’s writers that she finds pleasure and investment in. She feels some of her greatest accomplishments are when she helps people discover that they are writers and finds profound satisfaction upon seeing students succeed. While completely aware that teaching is not as financially rewarding or regarded as high value in society when compared to screenwriting, Valerie takes great pride in what she does as it is a chance to touch people’s lives and do real good in the world.
​
Valerie’s advice for aspiring writers may sound cliché, but she cannot emphasize enough the importance of just sitting down and writing. To be a writer is to write, and to never stop writing. Perseverance is the most important part of being a writer. Even now, despite being on hiatus as a screenwriter, Valerie has shifted gears. Inspired by the work she has been doing as a professor, she is currently writing her first non-fiction work, titled “Five Magic Words for Screenwriters.” Valerie, who is learning non-fiction for the express purpose of writing this book, says “When I find myself stuck, I just imagine how I would explain it to my students.”
​
When asked if she planned to return to screenwriting, Valerie explains that she might someday should the circumstances be right, but for now she’s happy teaching. Having been a writer for decades, she has been through many of the highs and lows Hollywood has had to offer, and has met both incredible people she still admires and terrible people she is happy to see finally getting their comeuppance.
​
Valerie’s hope is that all young writers will someday reach this point of comfort and confidence, and the wisdom and pure love she provides her students with is the encouragement many need to realize “I can be great too.”

“It’s very freeing and fulfilling to be a middle-aged woman right now. I’ve been getting angry over the past few years, finally, and that’s made me want to subvert stereotypes and exceed expectations with my writing. It’s so freeing not letting other people define me anymore. Other people’s opinions aren’t the end-all-be-all and reaching that point is amazingly fun. There’s a way to find a lot of power in yourself as a writer once you realize that.”