Vegan for A Day:
​Sun Cafe

Written by Andy Barrales
Photos by Maria Ordonez & Dulcie Yamanaka
The only difference between herbivore, omnivore, and carnivore, is the meat. Two out of three "-ivores" agree meat is delicious. The herbivores of the world do not know what they are missing out on. Omnivores and carnivores are likely to think, “I could never give up meat.”  So, when this particular meat eater was challenged to eat vegan for 24 hours, one word came to mind: “Why?!”

I showed up to a vegan cafe smelling like applewood smoked bacon, eggs and cheese, with the uncertainty of what was behind the doors of the restaurant. It was pretty unsettling. When I think about a “Man’s Meal,” I expect that meal to be made of a 16 oz. sirloin steak. Meat has such an appeal to it, it gives you its aroma as it flows through the air, the sizzling, the way it tears apart, the way it just seems to pull all the other sides into perfect harmony centered like the sun with the sides acting like planets in orbit.

However, this dedicated meat eater was not ready for what vegan chef Ron Russell had in store. To begin with, the plate of food looked like it came straight of Food Network Magazine and it tasted so amazing it was disturbing, like the planets were slapped out of orbit. There was a duel going between the delicious flavors and I thought, “This is unnatural, this is very wrong, this is not meat! Why does it taste like something made of meat?!” I had never considered that it was possible that vegan food could taste so, for a lack of better words, good.​​

"The plate of food looked like it came straight out of Food Network Magazine​." 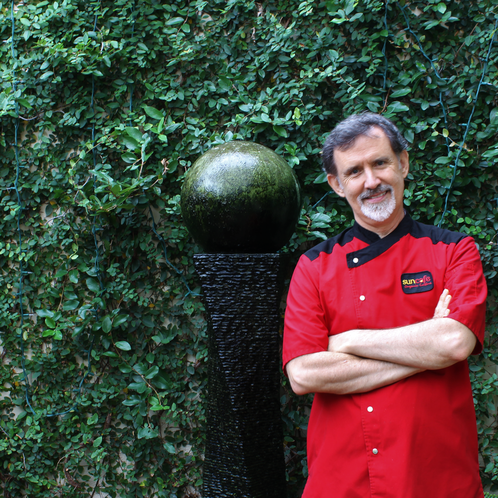 Vegan Chef Ron Russell
Sun Cafe is located on Ventura Blvd in Studio City, where the smell of citrus, bell peppers and mushrooms linger in the air. On the tip of your tongue you can almost taste the zucchini cooking in the kitchen in some Guy Fieri kind of dish, but one that will not slowly kill you. Sun Cafe’s atmosphere is serene; the mini waterfall outside feels like the intro to some movie that has a series of life-enlightening moments, like Kung Fu Panda 3. Sounds of glasses clinking, the wood floor creaking below patrons feet, and the humming of food processors make Sun Cafe feel like a boho New York artist’s loft.

​Upon introduction it is hard not to get lost in the electric blue eyes of Ron Russell, his eyes are hypnotizing. Looking at Ron one might think he is Bobby Flav’s silver goateed older brother. Ron has been a vegan for roughly 30 years and got the idea to start Sun Cafe after he noticed how there were about 4 vegan restaurants and they were all at least 15 miles apart from one another. He wanted to create a local place that provided innovative and delicious food. At Sun Cafe, they change up the menu every month to reflect a wide array of vegetables from local sources and make sure they mix up the menu like a quick-fire challenge on Top Chef.

When attending Ron’s vegan cooking class, Cooking Raw, I was feeling a bit out of place because I didn’t think a meat eating heathen belonged in a room full of people who want to be healthy. I looked around and saw the way people in the class asked questions, noticing all the curious vegans in the room. Ron Russell commands the room with his calming yet deep voice. Following his instruction is easy because he breaks down every step so even the slowest of audience members can keep up.

​”The rule is that it has to have a lot of flavor, I don’t like boring stuff. I’ve gone to so many restaurants that for some reason like the boring but I have just always been a bit of a foodie, and I love being surprised," he explains to the class, "I do have high expectations and I'm glad that both Rebecca and Ashli, who make delicious desserts and monthly specials respectively, can deliver such high quality food."

"I do have high expectations and I'm glad that both Rebecca and Ashli, who make delicious desserts and monthly specials respectively, can deliver such high quality food." - Ron Russell​ 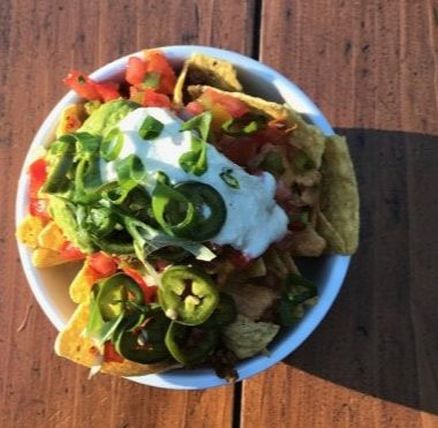 ​Vegan food sounds like something unholy to meat eaters and seems like the kind of punishment that one would not wholeheartedly pursue. I work in a cafe’s grill, cooking beef patties and smelling like I have just wrestled a baby cow into a sleeper hold. I wanted to try being Vegan because it cut out that feeling of feeling gross after a meal. Ron makes it a point to give a lot of information regarding the ingredients he uses and the kinds of things to consider when cooking, like the walking-talking version of a vegan food Wikipedia page. Meat, to meat-eaters is something that seems like an essential part of the equation for a balanced meal but Ron and his extensive food knowledge made it an easier transition for me, simply based on the amount of options available now.

​The cafe itself has such a friendly feeling about it, similar to the kind you get when you head to a family dinner during the holiday season. Ron is the co-owner of Sun Cafe, which manages to create different vegan meals every week.

"The rule is that it has to have a lot of flavor, I don’t like boring stuff. I’ve gone to so many restaurants that for some reason like the boring but it seems like, I just have always been a bit of a foodie, and I love being surprised." 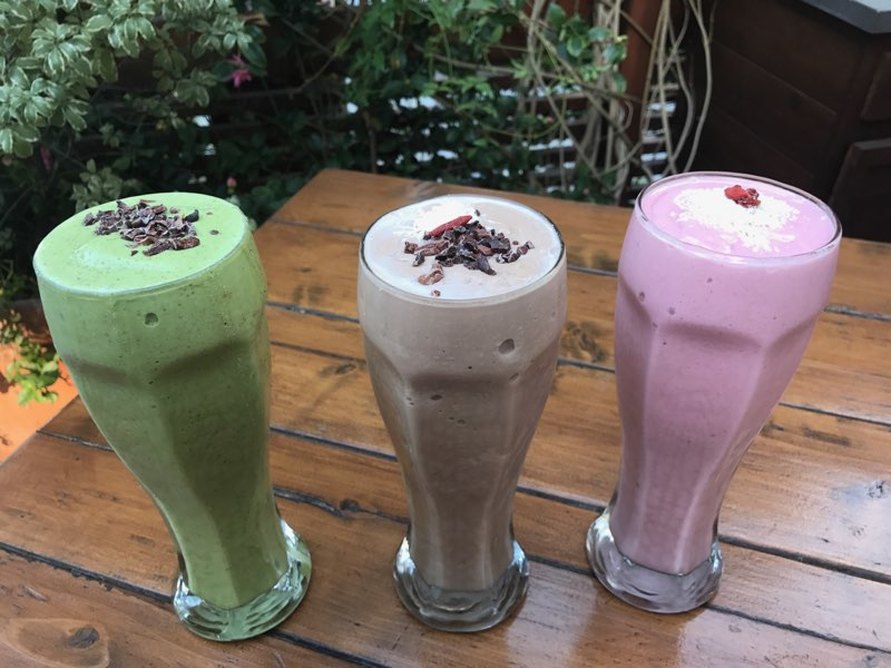 All the vegan shakes you could ever want...
​
People think you have to be a Pasadena soccer mom and go to an actual grocery store to be a vegan. The most hindering part of being a vegan for me was the sole fact that I didn't realize just how much of the food I consumed had animal products in it. Ron's classes can help with that by giving insight about what meat does to your body, why you may be unhealthy from eating it, and the general breakdown of what veggies do to keep the doctor away. The class is meant for everyday people who want a one-on-one with an experienced Vegan chef, with demonstrations that teach the essentials of healthy vegan eating.

The most difficult part of being vegan is the simple reality that the portions of vegetables feel unnatural as they are used to being eaten as a side rather than an entree, and my body asked, “So where’s the rest of the meal?”

"The class is meant for everyday people who want a one-on-one with an experienced Vegan chef..." 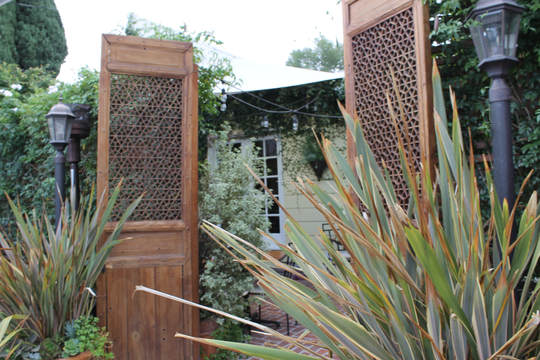 Vegans suffer their own set of personal restrictions by cutting down the options that are available to everyone. The most traumatizing thing a new vegan could suffer is to be dragged out to Korean BBQ with friends while trying to be Vegan...Being forced to watch friends as they tear into steak while you simply munch on the celery sticks you had to bring because they really couldn’t serve you anything that hadn’t been soaked in those sweet, beefy, umami-filled juices...All the while thinking to yourself your girlfriend must be pure evil for inviting you to this knowing you made a promise to yourself to stick to Veganism for at least 24hrs... This is followed by the fact that you waited for the 24hr mark to hit and went straight to McDonald’s because you missed the tender taste of cow.

All in all, Ron Russell makes a good argument to: “A pound of bacon a day will put some hair on your chest."  Their vegan food is great, the staff is delightful and, chances are, you’re doing yourself a favor. Veganism is more than simply giving up meat and eating vegetables. It helps the animals, it provides a better nutrition, and an all around more satisfying lifestyle that will leave you full of energy. You experience a delicious meal, that tastes like something you would normally eat as a meat eater and still get the health benefits? That's pretty sweet. You could be the strongest, jerky eating, muscle-toned lumberjack out there, but chances are, the guy munching into that head of lettuce has a better head on his shoulders for eating this way. 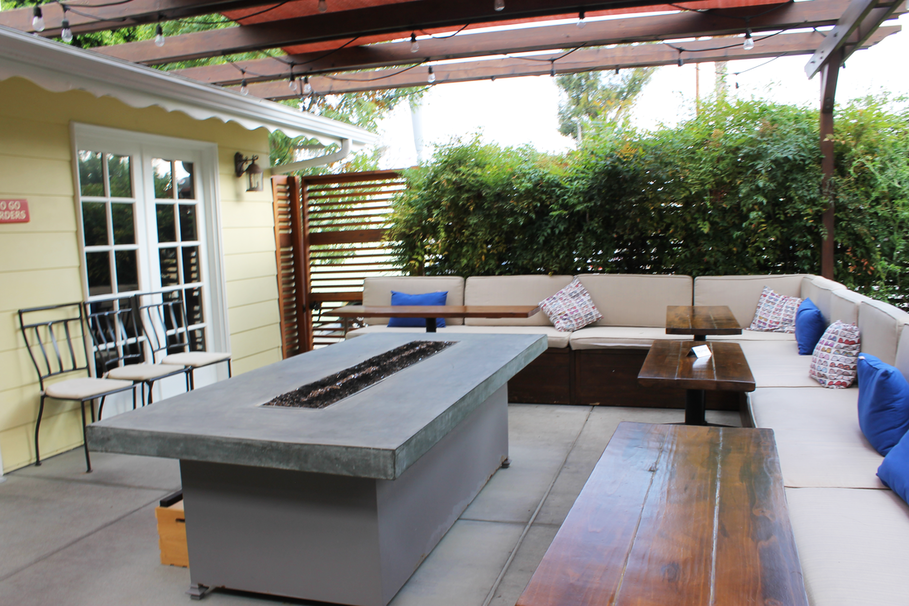