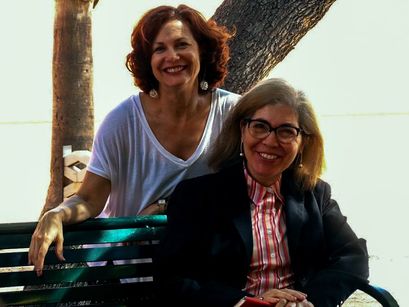 Cate Roman and Jeanine Centuori / Photo Credit: Meshaal Alhojaili
​Los Angeles county is a long sprawling metropolitan area made up of roughly 272 unique and individual neighborhoods. Many of these communities have their own long and sordid histories complete with a rich cultural heritage and eclectic residents from around the world and the Watts neighborhood is no different. Through its growth and development from a small agricultural community during the railway boom of the 1800’s to a gang ridden battleground of the early 90’s, the Watts neighborhood is often looked down upon as a rusted relic of the California gold rush.

​Despite its negative reputation, Watts still holds a rich heritage, a colorful history, diverse residents as well as a unique mix of international cultures. The Walk Watts program is a interactive multidisciplinary project, designed to accentuate the positive elements of the neighborhood. The Walk Watts project is a collaborative, multi-platform experience, designed from the ground up by Woodbury university professors Cate Roman and Jeanine Centuori.  The Walk Watts project is a self guided walking tour of Watts, with stops at such historic locations as the Watts Towers and the Alma Reeves library. 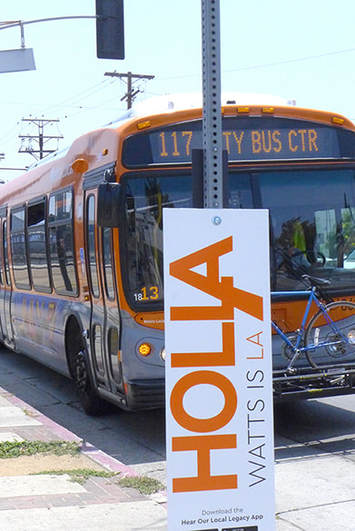 Photo Credit: Jeanine Centuori
​Centuori is a professor of architecture, with a special interest in civic engagement and interdisciplinary studies and Roman is a professor of graphic design. With the help of two senior students (Alex Kim from architecture and Briana Pong from graphic design), the team gathered firsthand research about the area, spoke with many residents about their stories and experiences in Watts, and developed an interactive tour of the neighborhood complete with a phone app to accompany the physical experience. Centuori describes the project: “Cate and I have a common interest in revealing erased or repressed histories in communities and how these explorations can cover a multitude of disciplines. Projects like this certainly cover graphic design, architecture, environmental design, communications and personal narratives. I approached Cate and told her about this client in Watts who wanted to create a tour of their forgotten community. Beyond the (Watts) Towers, there is this rich African American history of LA in this community that's largely been ignored and feared due to the Watts riots. We started to think about creative ways to bring that history to the forefront with our disciplines.”

​The Walk Watts project was a somewhat familiar one for Cate Roman as she had previously worked in association with UCLA and the Center for Jewish Studies on a project documenting the history of Jewish run grocery stores in Los Angeles from 1900-1950.  As Roman states:

“I was very interested in working in the Watts community because it presented an opportunity to preserve histories that were at risk of being lost." 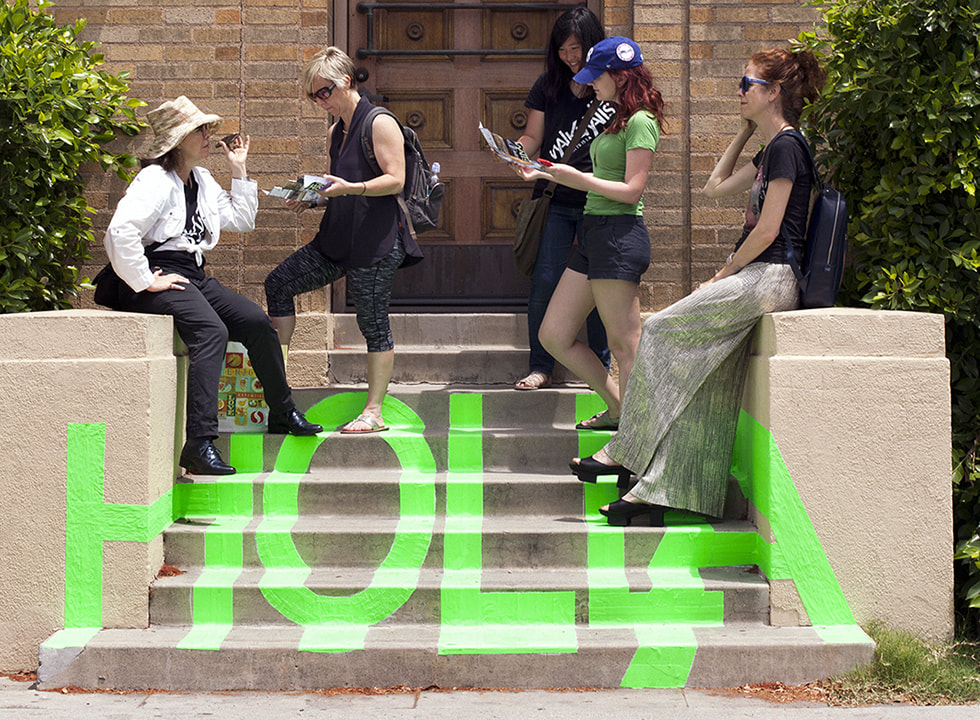 “The experience has three components to it, there's the physical map that folds open and gives you the locations," Roman related to me. "Then, at those locations were these guerrilla style graphics that we created with artist tape. Once you were at the locations, you could access the app which we named HOLLA (Hear Our Local Legacy App)...you could touch on one of the locations and hear a story told by a community member. In the app, we have a list of all the people we spoke to, and they all have a 1 to 2 minute story that you can listen to at the physical location…the story will play no matter where you are, but it's intended to be played at the actual location to give a much more immersive experience. It all sheds light on the history of where Watts has been, where it is now and where it is going. We had to use recordings from the past - to do that we worked with the WLCAC (Watts Labor Community Action Committee) to gain access to these interviews. With this program, we were able to tell some really broad stories spanning a large timeframe.”

Having only six weeks to complete the project, Cate and Jeanine are utterly enthralled by what they were able to accomplish in such a short amount of time. They make no secret of the incredible team they assembled as Jeanine exclaims: “Our interns were instrumental, this was really a solid team! We didn’t really have a hierarchy, obviously, there were decisions that had to made from time to time, but we worked really well as a group, and Briana and Alex were fantastic!”

​When asked about the future of the project, both women expressed a great interest in doing the process again. Aside from applying for grants to finish the Walk Watts project, Cate and Jeanine are currently in talks about taking this idea and applying it to other communities. ​