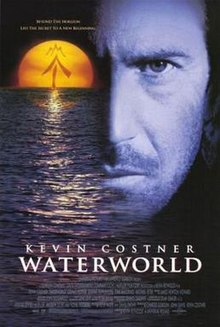 WATERWORLD: A TIDAL
​
WAVE OF ACTION!

​Do you love theme parks? Do you live around the Hollywood area and are looking for something fun to do? Do you love crazy stunts and pyrotechnics? Well, get ready for a post-apocalyptic show of a lifetime. Waterworld: A Live Sea War Spectacular is the number one show in Universal history, and it has been around for over 25 years. It's roughly a twenty-minute show packed with pyrotechnics, fire effects, loud noises, stunts, gunfire, and loads of fighting. And the best part, you can meet and take pictures with the cast afterward and ask them all your questions, and I did just that for you.

Waterworld is a 1995 action film based on melting polar ice caps, which leave humanity living on floating fortresses known as Atolls. It was the most expensive film of its time, and it flopped at the box office like a fish out of water. Since they filmed on the ocean, the crew had many problems, including a giant set of the Atoll sinking to the bottom of the sea and a few cast members almost dying. According to IMDb their budget was $65 million, but they spent $175 million, which was their biggest problem. The film made a total of $264 million which wasn’t even half of what was spent! 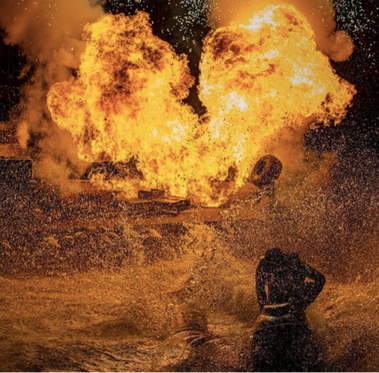 One of the Mariners, Josh Wray, escapes an explosion just in time. Photo by Tanya Minassian
Waterworld: A Live Sea War Spectacular first opened at Universal Studios Hollywood on October 21, 1995, only three months after the movie's release date on July 28, 1995. Since then, the show has opened in Japan, Singapore, and Beijing.
The soundtrack at Waterworld is snippets from the songs in the movie, which makes you feel like you are there.
There is always something to look at -- whether it be the beautiful blue water, the set, or actual set pieces from the movie that are right when you walk in. The show's venue can hold around 3,000 people and is visited by thousands a week.

I am one of those thousands of people. I have been visiting Universal Studios my whole life, and Waterworld has always been my favorite. I've always had a sweet spot for special effects in movies and pyrotechnics, and I got my fix at Waterworld.
The exciting part about a live stunt show such as Waterworld is the behind-the-scenes. What makes these shows so magical is that we are used to stunts/pyrotechnics being on TV or in movies. But when it's right in your face, you are immersed in that world.
"Things worked out pretty well for me there." 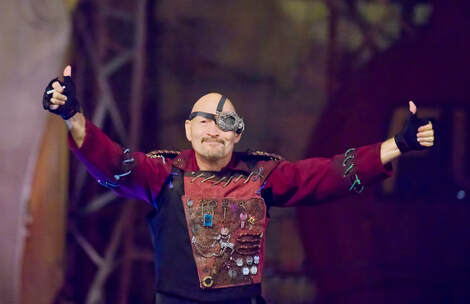 Greg Dolph dressed as the Deacon in Universal Studio's Waterworld show. Photo by Holly J Seiver
Greg Dolph helps create that live movie magic, and I interviewed him on Zoom. He is one of the current "Deacons" at Waterworld who starred in the first live show to paying customers in 1995. Dolph is a stuntman and comedy performer who has worked on movies and television shows such as Resident Evil: Extinction, "9-1-1," "The School of Rock," and "The Conan O'Brien Show."

As an original cast member  how did you hear about the job, and did you initially interview for the Deacon?
The live show community, as big as it is, is actually still a relatively small community. Once you're inside that bubble, there's a lot of networking. It's a people-oriented industry, so people that are in those various facets of the entertainment industry start to know each other, even if only by name and reputation. I originally went in and interviewed to direct Waterworld back in early 1995. So, I went in to interview after that, and the guy that went in after me, Tito Enriques, who's wonderful, ended up getting the gig to direct it.I like to think I got a better gig. He got a year's worth of work directing it, and I got 26+ years of work as a performer. Things worked out pretty well for me there. 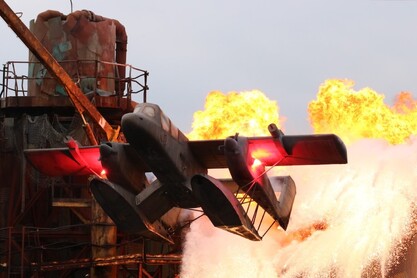 Waterworld Seaplane launching over the wall straight at the audience. Photo Credit: Madison Joneson.
I know I can speak on behalf of many people who have seen Waterworld when I ask how the plane launch and jet skier/water skier launch work.
Those elements use the same technology. Both of them use a hydraulic launch. It's very much like a plane taking off from an airplane carrier.
The Seaplane is sitting on a monorail with a designated angle that will take it over the wall, and the plane is at its highest point once it launches.
The wings are angled so that it can't take off and go into the audience. The jet ski uses the same launch. It's in a tray and has what is called a bogie. The bogie pulls the jet skier up the ramp. Sitting right next to that is another ramp and inside that ramp is a tray for the water skier. They go from 0 to 30 something miles an hour in a second. The launch is actually the most difficult stunt in the whole show. 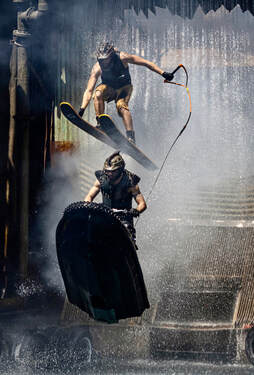 Smokers, Loren Stolin and Matt Quinn (the bad guys) launching through the wall from 0-30+ miles an hour in a second. Photo Credit: Tanya Minassian.
Many stunts include jumping off a platform into the water. Are different parts of the arena different depths for the different dives?
The water level varies in depth all around the pool. It’s actually a pretty wavy terrain and cool to look at when the pool is empty. The depth is between 4 to 6 feet around the edges and 8 to 10 feet out in the middle. There are two locations of significant depth. The first is beneath Audience Tower Three, where Lackey does the caveman dive, chasing Helen off the slide for life platform. The water is 12 feet deep there. The pool's deepest area is where the fire dive takes place off Center Tower. At that location the pool is 22 feet deep.

Does the fire diver have to hold their breath from when they get lit on fire to when they come up from the water?
The short answer is correct. There are opportunities if they are running and they know the fire is behind them; they can probably take in a quick breath. I'm sure all of them have their own little tricks. But generally, the answer is once they are on fire, they need to take a good breath. It's quite dangerous to have fire whipping around your body, so you have to be very careful when you choose to breathe. 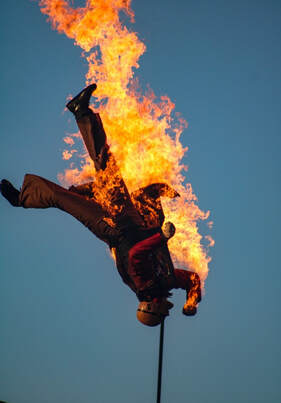 One of Deacon's stunt doubles, Westley Lambert, doing the 45 foot fire dive. Photo credit: Aidan L. Vasquez.
Is there any way students or people interested in live stunt shows can walk around the set and see things straight from the set itself?
They do tech tours. If you and a large group of people like your school wanted to do a tech tour, they could call Universal and say we want to organize a tech tour so we can come backstage. And you'd have someone walk you around and talk you through all of the elements. They also have VIP tours where people stay after the shows, but you'd stay in the audience. The tech tours are more designed for educational purposes.

Before we go, is there anything else you'd like to add that you think would be cool to add?
Probably the coolest thing I can tell you is that there is a lot of discussions right now about a TV show based on Waterworld. Everyone is wondering what that will be like. Will it be a retake on the original or an extension on it?
The rumor right now that I've heard is it takes place like 10-15 years after the original movie. And of course, from our end, we wonder what it will do to our show.
If that TV show takes off and it's really successful, will Universal Studios Hollywood feel the need to update our show to reflect the TV show? Or how the
TV show and our live stunt show live in existence with one another will that help us or hurt us? We don't know, but I think that's pretty fascinating.

​"I'm sure all of them have their own little tricks."
If you're interested in watching the show, you can buy tickets to Universal Studios here.
Or, if you are interested in being a stunt performer for Action Horizon Stunts, you can find more information here.
If you liked the photography I used, you can view/follow my friends' photography Instagrams here: Tanya,  Aidan, Madison, and Holly!

Lastly, thank you to Greg Dolph. I wouldn't have a love for improv or special effects if it weren't for you! You're the best! 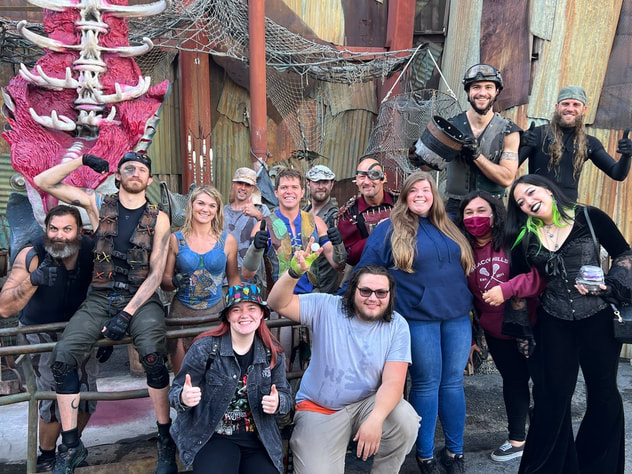