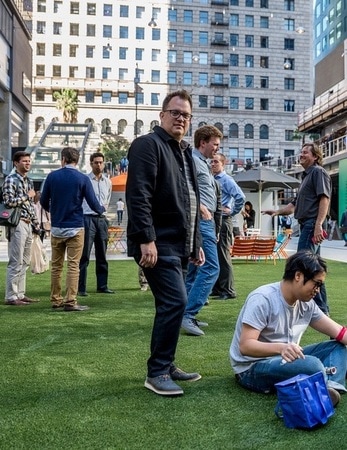 Marcus Luciani, Associate Principal at Studio One Eleven
Have you ever been to a shopping center and wondered who designed it? Well, the odds are that Marcus Luciani is one of the architects behind it.  During his tenure at Studio One Eleven, he has provided design and technical direction for award-winning projects both domestically and internationally. Luciani led the effort to open the companies Shanghai office, and was the Director of Operations for the companies China presence. He is currently an Associate Principal at Studio One Eleven and the director of the Los Angeles office. Most recently Marcus is the project director and manager for the Bloc, a mixed use urban adaptive re-use project in the heart of Downtown Los Angeles. The Bloc in Downtown Los Angeles located off 7th and Flower is the largest mixed use urban development in Los Angeles, taking up a full city block. It is currently home to LA Fitness, Macy’s, The Sheraton Grand, and many more retail stores. It has the first metro railway network station in Los Angeles that exits directly into a private business establishment. The Bloc’s plaza has housed LA Fashion Week, and Sean Whites clothing launch event for 2016.

How long have you lived in Los Angeles?
​“I moved to Los Angeles about 3 years ago. I moved to the heart of Downtown, where the energy and action is. That’s the part of a city that I like, where I can feed off of the excitement.”​
What are some places that locals know about that tourists do not?
“I don’t know if the notion of 'local hot spots' really exists like it used to. With the internet and sites like Yelp, EaterLA and Curbed to name a few, the word gets out really quick when something new and cool comes to town. Usually a new restaurant will open and within days it’s got a line out the door and the secret is out, and I think that’s a great thing. The places I like are the ones that can hold up to the hype, and don’t lose their appeal. Definitely as restaurants go I am still a big fan of Bestia located in the Arts District. I always send visitors there and they are never disappointed. Another favorite is Uli, a small locally owned Gelato shop with the most amazing treats. You can often find the owner, walking the streets visiting her neighborhood business, and partnering on them with products.  Think a Rye Bread Gelato with the local German restaurant, or a Horchata Gelato with the local taco shop. Those local connections are what make taking part in a downtown community so interesting.” 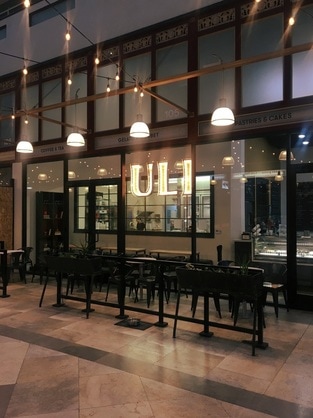 ULI, DTLA
What are the best places to get a drink in downtown?
“Downtown definitely doesn’t have a shortage of bars, it’s one of the first things that came to life after the rebuilding efforts began. Seven Grand is a great spirits bar on the second floor in the Financial District.  It has a great selection of whisky and scotch.  Grand Central Market has recently added a few bars to its mix of tenants, and the evening crowd has really started to catch on. One of the new offerings there is Golden Road Brewery, which is a local brew form Los Angeles. Also the historic eatery Clifton’s Cafeteria recently opened a 2nd floor Tiki Bar that is starting to catch on. And most recently there is a speak easy that opened in a basement on Broadway called Birds & Bees.”

​Any advice for people wanting to move to downtown?
“Downtown is an amazing place to live if you want to be in the center of what’s happening. The problem with being in the center of what’s happening is eventually the prices make it difficult to live there. Right now there is a housing shortage, so rents are high, but there is a lot of new housing coming online that will help balance that. Much of the new housing will be for sale as well, so if you are planning to buy a property in the near future you should definitely jump on the change to own in DTLA. The Metro is also expanding, so when you look for a place to live look for options near the transit stops. Also spend some time here both in the daytime and evenings. Downtown is in the middle of an amazing transformation, but it also still has its problems. Make sure it’s something you can handle and live with. And lastly, get involved!  The way we move a city forward is by getting involved, volunteering and doing your part to lift up those who need help.  It’s a great feeling to help others, and play a role in shaping your city.”